In December 2018, just before Christmas, Timothy Cox sunk into a chair in his quiet office, exhausted. The Army officer was drenched in sweat, his muscles throbbing from top to bottom. He tried not to dwell on the fact that hitting his goal would require months more of this: the 5 a.m. workouts. Saturdays on the track. Curtailing the Sonic drive-in ice cream, his lone vice. His rest period almost over, he stood up, walked over to his white board, and scribbled a number: 600. The number didn’t just signify perfection on the Army’s recently revamped fitness test. Like a four-minute mile or a two-hour marathon, no one knew if it were even possible yet. But Cox was determined. He looked at the number again, then he got back to work.

Between where Cox, now 39 and a Major at U.S. Special Operations Command in Virginia, was that December and where he ended in July 2019 as the first soldier ever to record a perfect 600 score on the new Army Combat Fitness Test (ACFT) required making some major changes to his routine. The previous fitness evaluation was a simple mix of push-ups, sit-ups, and running. The ACFT, introduced in late 2018, ballooned to include six different exercises, including a three-rep max deadlift, a standing med-ball throw, hand-release push-ups, a grueling sprint-drag-carry, an abs-burning leg tuck, and a two-mile run. “If I want to do this thing,” Cox recalls thinking, “I have to work on my push-ups.”

It’s worth noting that Cox wasn’t exactly coming off the couch. A former high school state champion in the 800-meters (approximately a half-mile), he both ran track and played basketball for Division II McPherson College in his home state of Kansas. It’s rare that one athlete would compete in two such disparate sports, but Cox is something of an anomaly. At six feet, three inches, he’s taller than almost any distance runner you’re likely to meet, and at his in-season weight of 180 pounds, he still had about 30 pounds on the few runners who matched his stature.

When track ended and pre-season for basketball began, Cox would hit the weight room, guzzling protein and packing on weight to hold his own in the paint, settling at 210 pounds before the first whistle. He did this every year. Hollywood leading men win Oscars after undergoing similarly dramatic body transformations, but for Cox, it was just part of his approach to being a well-rounded athlete. “What I prided my [high school and collegiate] career on is being the most complete athlete I can be,” he says. “I want to be able to move large amounts of weight, I want to be fast, I want to be agile.” 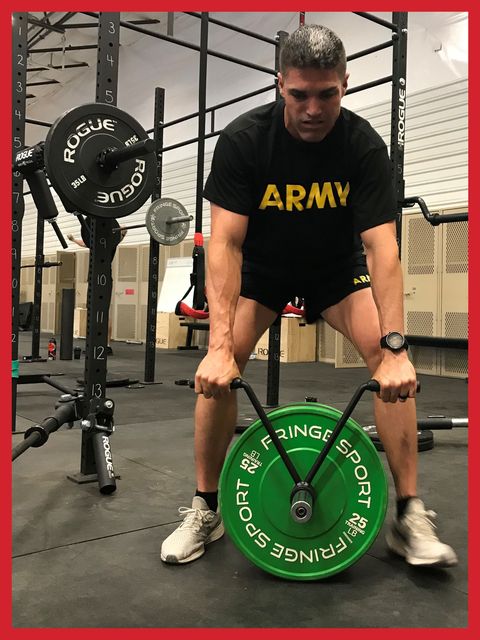 So, about those pushups: Cox says that when he evaluated his initial ACFT results—a near-perfect 587 of 600 points—the hand-release push-ups were his “weakness.” With the same resolve he applied to those college workouts, he attacked. First came Tabata-style workouts. For 30 seconds on, 30 seconds off, Cox would crank out as many hand-release push-ups as he could, four or five minutes total, twice a week.

He also adapted a classic track workout: 400-meter repeats. Traditionally, you’d hammer a lap at 5K to mile pace, jogging a half-lap, or 200 meters, in between for recovery and completing eight to 12 intervals. Cox says he would walk the first 100 meters of recovery, drop and rip 20 to 30 hand-release push-ups, and then walk the next hundred meters before starting the next interval. While his pace of 85 to 87 seconds would be pedestrian for a mid-distance collegiate, “At the time I was well-removed from college,” he says, laughing. “It hurt.”

That was all on top of his other workouts, which were extensive: Six days a week, he’d wake at 5 a.m. to hit the gym, pairing traditional muscle groups like back and biceps one day, chest and triceps the next. Legs had their own day, and during every workout, regardless of muscle group, he’d add core and grip work. Then he’d leave the gym to arrive at his unit for 6:15 a.m. physical training, which he’d lead, and might include running, calisthenics, and more. 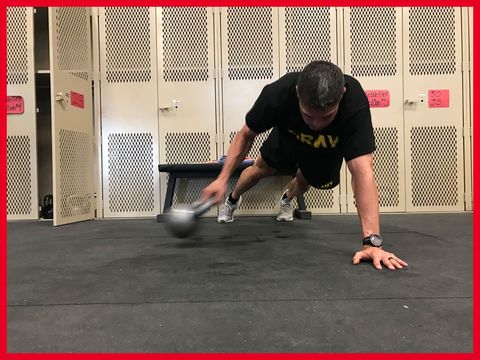 Saturday mornings, meanwhile, were always spent on the track, and true to his Christian faith, he rested Sunday. Beyond his newfound resistance to ice cream, Cox kept his diet low in sugar and ate at home with his wife and children. Prior to morning workouts, he’d always have a light breakfast of oatmeal and bananas or toast and eggs with coffee.

Over the course of seven months, Cox saw his performance steadily improve, notching a 595 and then a 598 out of 600. Coming off a short business trip in July and with no warning, he was asked if he wanted to take the test again. There was no time to dither. “Once I got past hand-release push-ups,” he says, “I knew I could do it, and that’s when the realization set in.”

For his accomplishment, the Army lauded him, and a few military-centric publications came calling. But by and large, Cox’s life has continued on its normal trajectory. In July 2020 amid the COVID-19 pandemic, he was assigned to USSOC in Virginia, where he now spends his time learning a new role and, yes, still getting in consistent workouts, but with some modifications.

Base regulations in response to the virus have meant that to put up iron, he’s had to build a home gym, and his runs are entirely solo. Group workouts consist of his wife and four children planking on the living room floor with the music blaring. If he had to, he says, he could still notch a high-500 score in the ACFT, but perfection, for now, is back in 2019.

Cox is also quick to credit many of his military counterparts for their help writing him into the U.S. Army record books. He mentions his unit’s physical therapist, who introduced him to foam rolling and a lacrosse ball. He thanks the nutritionist, the physical trainers he consulted, and the push-up-machine friends who helped him design his workouts. He thanks his wife and the Army, his children and his faith. Most importantly, he thanks the men and women with whom he served.

“Yes, a lot of it was on my own,” Cox says of his training. “But probably my best workouts were when I had a soldier next to me, pushing me to be the best. That competitive spirit we had was contagious.”