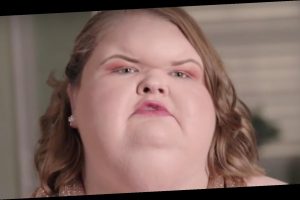 Tammy Slaton and her sister Amy Slaton started documenting their everyday lives on YouTube in 2014. A few of their videos went viral, and by 2019, they had gained more than 100,000 followers. Their fans were so interested in the sisters’ lives — particularly their weight loss journey — that they wrote to TLC asking about a show for the sisters, and TLC accepted the pitch, as reported by The Courier-Journal.

The sisters debuted on TLC in 2020 via their new show, 1,000-Lb. Sisters. At the series’ start, Tammy weighed about 400 pounds while Amy weighed about 600 pounds, hence the show’s name, according to The Courier-Journal. The show follows the sisters in their hometown in Kentucky as they modify their eating habits and work toward obtaining bariatric surgery. “Doing the show is one way to give us a different light because you can only show so much on YouTube,” Amy told The Courier-Journal in December 2019. “This is actually day-to-day stuff that we deal with.”

Since beginning their weight loss journey, there have been many changes in Amy’s and Tammy’s lives. For instance, Amy got to meet the requirements for bariatric surgery, and Tammy got a boyfriend. Tammy’s latest news isn’t about her weight or her boyfriend, though. It’s about her sexuality: She revealed in a clip released on Feb. 14, 2021, that she is pansexual. Here’s everything we know about the reality star’s announcement.

In a sneak peek of 1,000-Lb. Sisters obtained by TMZ, Tammy Slaton told her boyfriend Jerry that she is pansexual. “It means love is love,” she tells him. “I would date anybody whether they’re transgender, straight, gay.” Jerry seemed a bit confused and asked his girlfriend if she would date a transgender man. She responded that she would. “Or girl. It’s about how they make me feel, not how they look,” she states. Amy Slaton and her husband, Michael Halterman, were also present during the conversation.

Tammy is later heard in the clip explaining her sexuality. “I always thought I was bisexual, and then I started talking to one of my friends and she told me she was pansexual, and I asked her kind of what it meant,” she recalled. “It means you love everybody, not just the same sex. And I was like, ‘Well, I guess I am too,’ because I wouldn’t mind being with someone who’s transgender, or whatever.” Jerry, although a bit shocked by the news, told Tammy he loves her no matter what. “I’m happy because he took it pretty well,” Tammy said about the conversation. “Acceptance of people’s sexuality is important to me.”

Of course, coming out isn’t the only development in Tammy’s life — here’s what else she has on her plate.

Tammy Slaton still has issues left to work out

Although Tammy Slaton celebrated her sexuality with her family and boyfriend by her side, she is still struggling to qualify for bariatric weight loss surgery. Her journey is more difficult as her sister, Amy Slaton (pictured right), has received many more positive comments after losing weight and getting pregnant.

“I mean, it doesn’t make it okay for people to [say], ‘Oh, you’re not doing what you’re supposed to be doing,'” Tammy lamented in a February 2021 interview with People. “‘Amy looks great.’ ‘You’re not doing anything.’ Bull crap. How do they freakin’ know?” She continued, “I don’t know if these people have intentions on trying to help by hating, but it’s not helping. I’m an emotional eater. And I wear my heart on my sleeve. I’m easy to upset. And things like that doesn’t help me.” Meanwhile, Amy has been receiving flack from her family for her eating habits while pregnant because they are concerned she could regain the weight she lost, People reported. However, Amy defended herself by saying she wants to be able to enjoy her pregnancy.

We don’t know as of this writing whether Tammy will qualify for bariatric weight loss surgery one day, but it is clear she’s not the only star who had a big announcement to share in 2021.

Several celebrities have identified as LGBTQ+ in 2021

2021 is still young as of this writing, but it has already seen a few celebrities identify in the LGBTQ+ spectrum. Lead vocalist of country duo Brothers Osborne, T.J. Osborne, announced via Time in February 2021 that he’s gay. “I’m very comfortable being gay,” he said. “I find myself being guarded for not wanting to talk about something that I personally don’t have a problem with. That feels so strange.” Star Trek: Discovery star Mary Wiseman confirmed that she is “queer and proud” in a January 2021 interview. Professional wrestler Chris Lewis said he was pansexual via Twitter on Jan. 1, 2021, and actor Maddie Hanson came out as “bi and proud” a few days later, per Pride.com.

Most notably, however, Nickelodeon star, singer, and dancer JoJo Siwa came out while wearing a “Best. Gay. Cousin. Ever.” shirt on Jan. 22, 2021. That same day, she appeared in a TikTok dancing with multiple members of the LGBTQ TikTok group, Pride House. The caption read, “Now your (sic) one of us!!” In February 2021, the teen icon posted a tribute to her girlfriend for the first time. “After being my best friend for over a year, January 8, 2021, I got to start calling this exceptional human my Girlfriend… and Since then I’ve been the happiest I have ever been!” JoJo captioned the photo.