‘In my head I heard my name’: Alison Hammond reveals that she thought she DID win the NTA gong for Best Presenter in an hilarious mishap… as Ant and Dec remain the reigning champions

She missed out on the Best Presenter gong during Thursday evening’s National Television Awards, as Ant and Dec onced again scooped up the award.

But Alison Hammond has revealed that she actually thought she HAD won the award, mishearing as the Geordie duo, who were absent from the ceremony due to Covid, were declared as winners.

Admitting the blunder during Friday’s episode of This Morning, the host, 47, explained that she had to check with co-host Dermot O’Leary whether she had won or not. 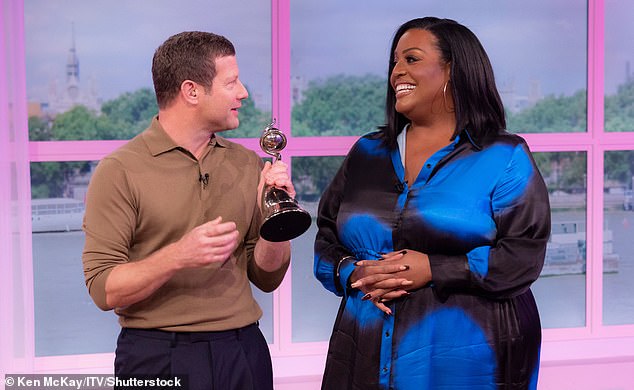 ‘In my head I heard my name’: Alison Hammond, 47, has revealed that she thought she DID win the NTA gong for Best Presenter in an hilarious mishap

The This Morning studio was filled with confetti following the NTA celebrations, as Alison and Dermot appeared joyous while opening the show.

Reminiscing on the night, Alison dubbed Dermot ‘the funniest partner’, before explaining the hilarious moment.

She shared: ‘Obviously I was up for an award but in my head I heard “Alison” when they called out Ant and Dec.

‘So then I reached across to Dermot and said, “Did they say Alison?” and Dermot went, “No. They didn’t say Alison.” I was so shameful. It’s so embarrassing!’

She explained: eached across to Dermot and said, “Did they say Alison?” and Dermot went, “No. They didn’t say Alison.” I was so shameful. It’s so embarrassing!’ 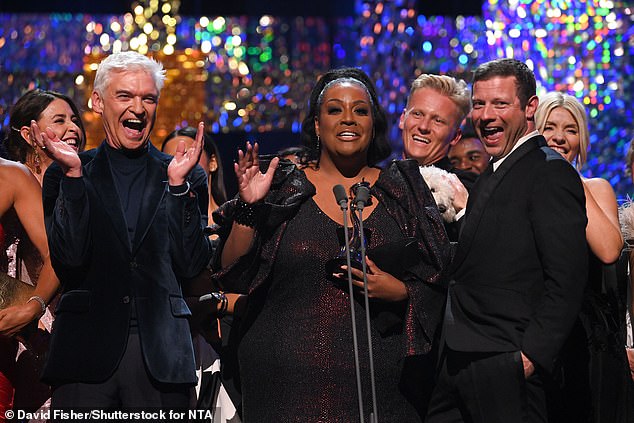 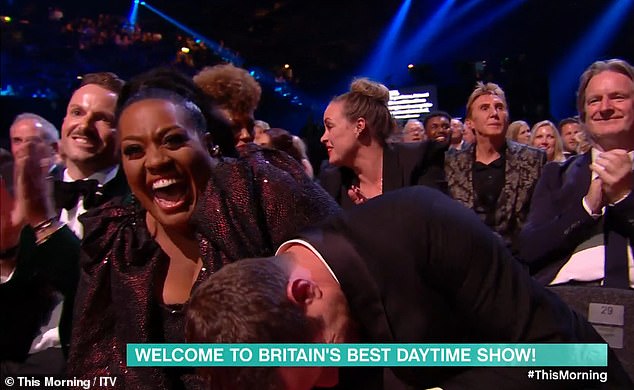 Giggles: The pair were left in stitches during the ceremony over the mishap 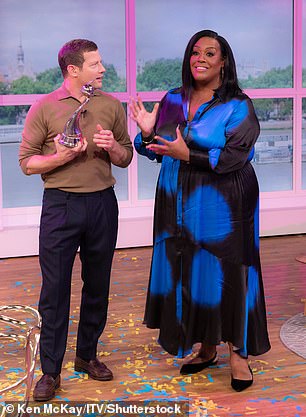 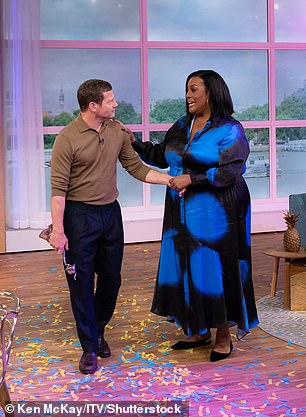 Reeling from the night: The pair had a debrief following the big night, as Dermot clutched onto to the newly attained award 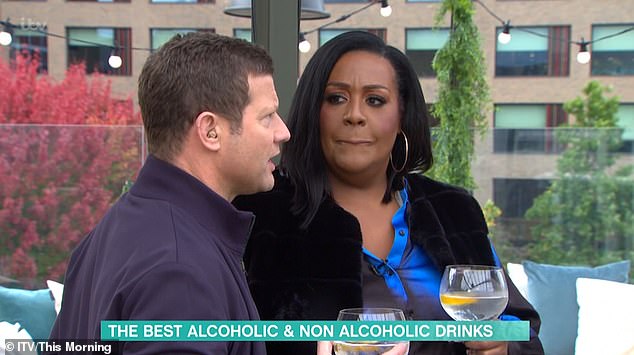 Cheers! At the end of the programme, Alison and Dermot enjoyed tasting several alcoholic and non-alcoholic beverages 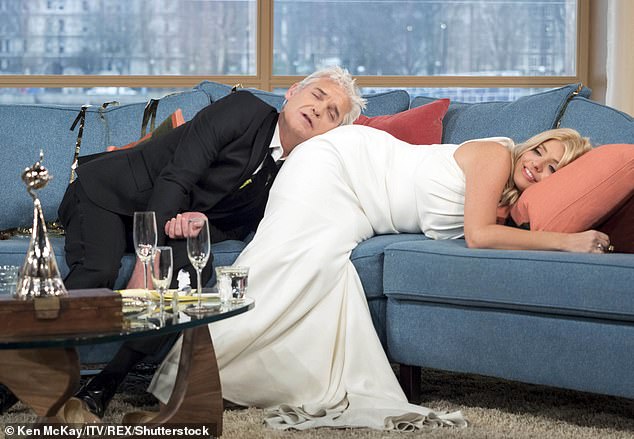 Funny: Phillip Schofield and Holly Willoughby didn’t appear on This Morning to present the show hungover as fans previously loved to see

‘I wasn’t joking. But what a great night! We are truly, truly, the whole team, they all work incredibly hard. We are so grateful for this award.’

As Alison retold the story, a clip of the pair during the moment popped up – showing them in stitches as Stephen Mulhern went up to collect Ant and Dec’s award on their behalf.

At the end of the programme, Alison and Dermot enjoyed tasting several alcoholic and non-alcoholic beverages.

The daytime TV host was tipped to win the coveted award, but missed out as Ant and Dec took the crown for a 21st consecutive year. 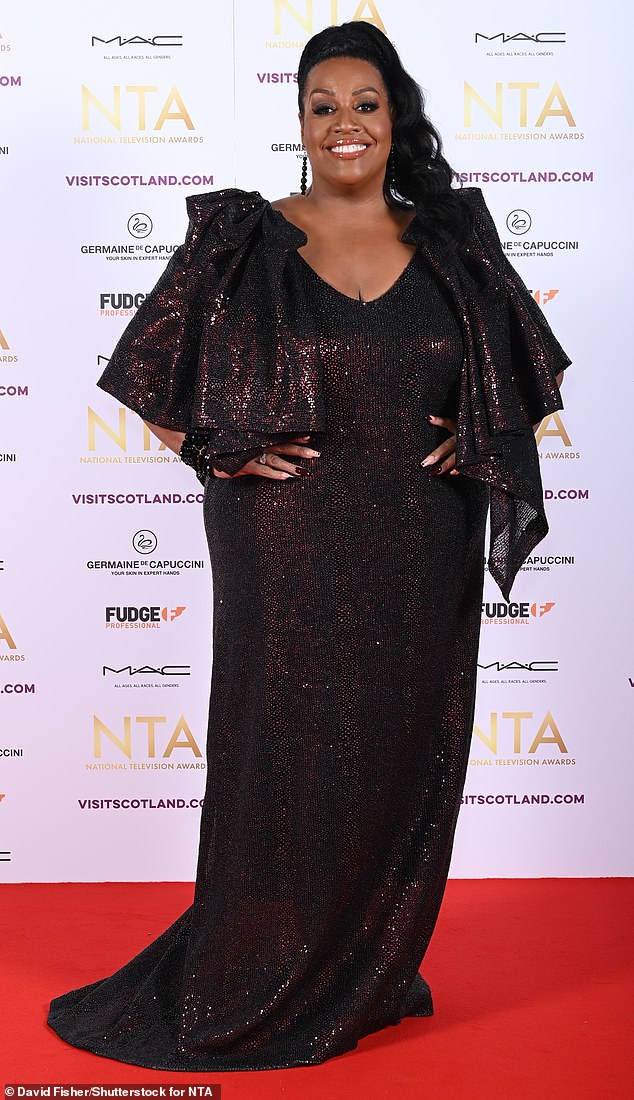 In the running: She was tipped to win the coveted gong in the lead up to the star-studded ceremony

The pair were not at the glitzy awards ceremony as they both had Covid – with Stephen accepting the gong on their behalf.

But many fans were unhappy with the result, dubbing it the ‘Ant and Dec award’ as they called for the pair to bow out.

One tweeted in reaction: ‘Why are people acting like Ant and Dec are the only presenters in the entire UK that are worthy of winning the award every year. 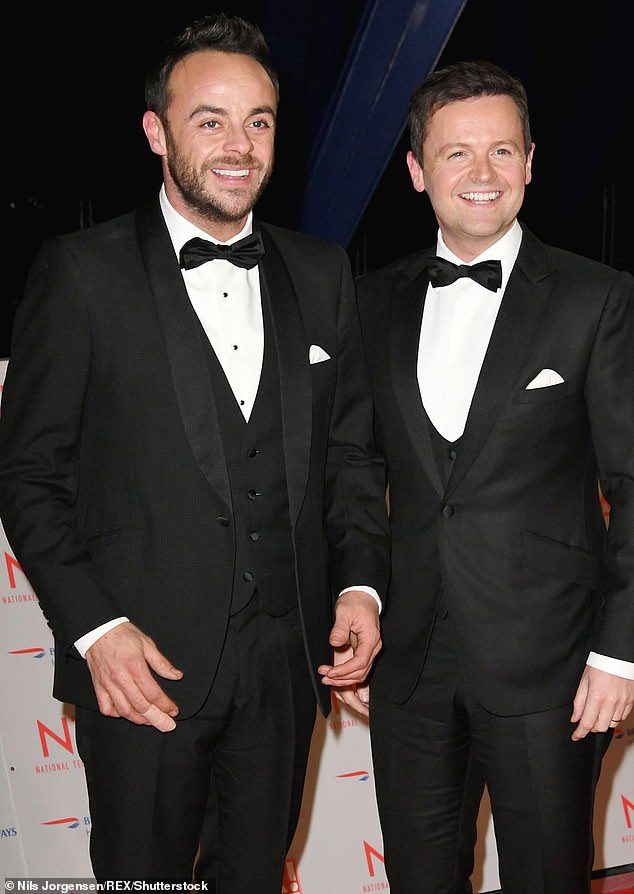 Winners: Ant and Dec took the crown for a 21st consecutive year, but missed the ceremony as they fell ill with Covid-19 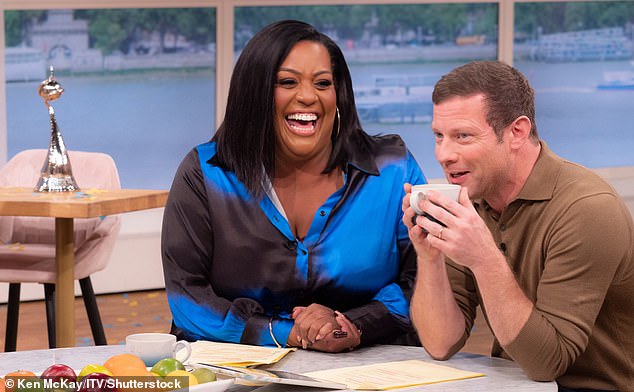 Sleepy: Alison and Dermot admitted they were feeling tired after the hectic awards night, despite looking fresh faced for the appearance

‘They are NOT. Alison has interviewed some of the most famous people and they have all loved her. Why can’t she win for once!’

Another wrote: ‘I love Ant and Dec, I really do, but it should of been Alison this year…them winning every year is getting beyond boring.’

While one said: ‘Ant and Dec have won the same award for like 2/3 of my life and we’re meant to sit here and take this?!’

But all was not lost as Alison did take to the stage to accept This Morning’s Best Daytime Show award, heading up alongside Dermot, Holly Willoughby and Phil Schofield. 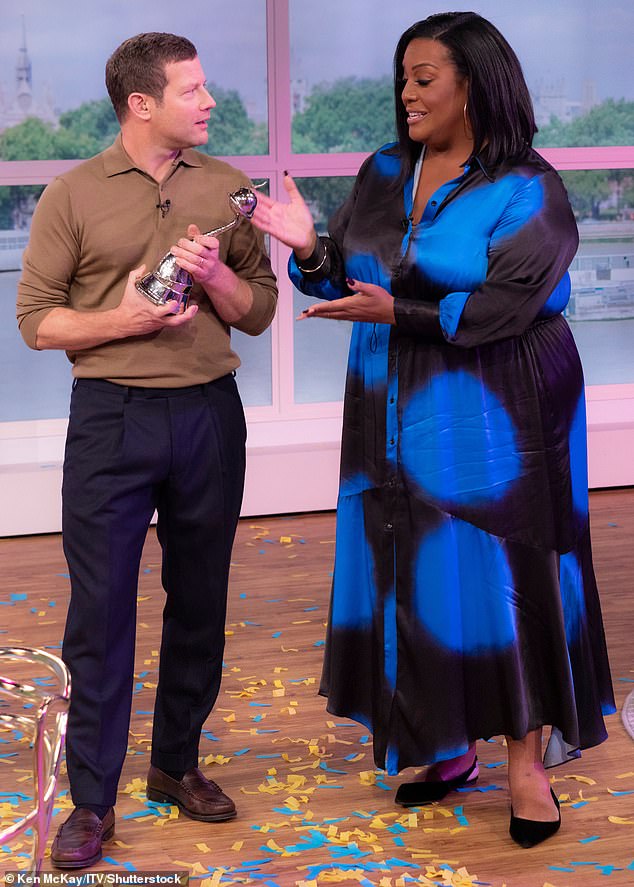 Grateful: ‘I wasn’t joking. But what a great night! We are truly, truly, the whole team, they all work incredibly hard. We are so grateful for this award,’ explained Alison

The team were delighted with the win, despite it being clouded over by Holly and Phil’s recent ‘queuegate’ controversy – with the crowd booing the pair as they went to collect the award.

But they did recieve a flurry of congratulations from showbiz pals, including Lorraine’s Ria Hebden – who shared a gushing Instagram Story on Alison.

‘Big love for @Alisonhammond who got one of the loudest cheers by fans last night’, she penned over a picture of the pair on the red carpet. 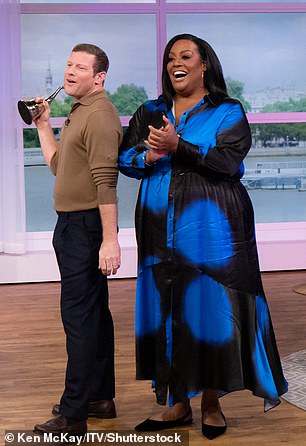 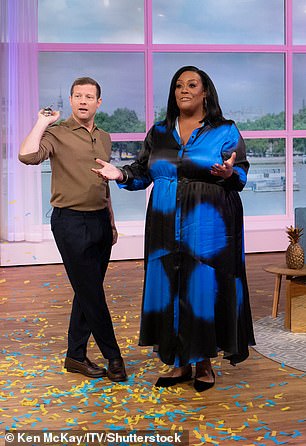 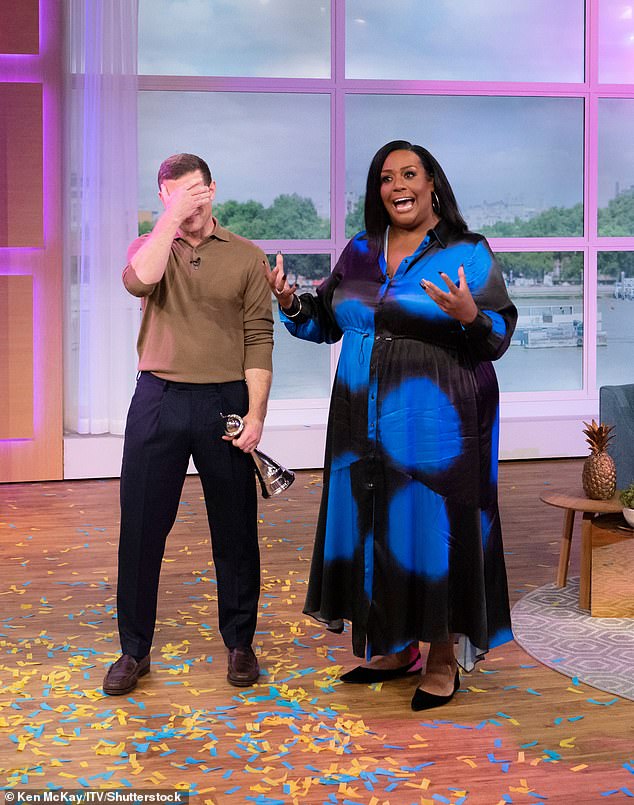 Smart: While Dermot opted for a tan jumper and straight leg, navy trousers 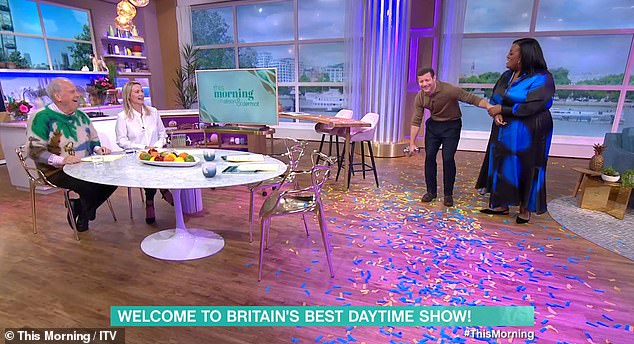 Celebrations! The studio was filled with confetti as they celebrated the win 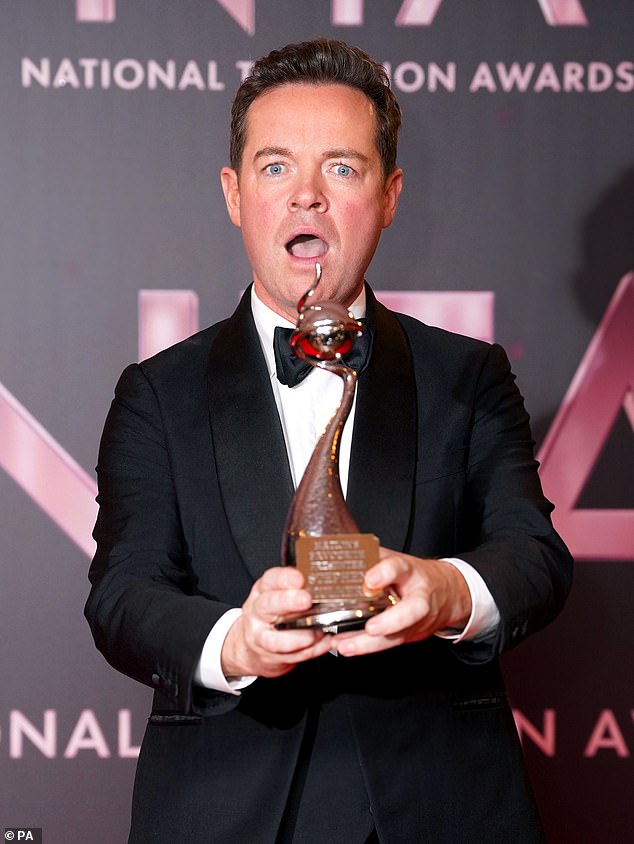 Standing in: Stephen beamed as he held Ant and Dec’s award for pictures 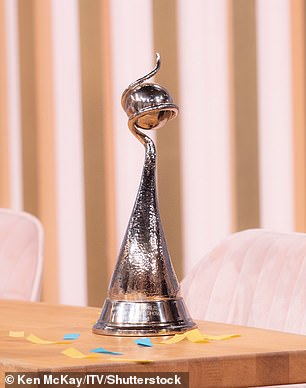 Honour: The NTA award took pride of place during the show as it sat on the studio table

And during Friday morning’s instalment of Lorraine, the Entertainment Correspondent once again had words of love for Alison – but appeared to stay tight-lipped on Holly and Phil.

Many fans even called for the duo to ‘give the award back’ as they took to social media to share their frustration.

The presenters found themselves at the centre of the ‘queuegate’ controversy’ in September when they were accused of skipping the queue to see the Queen lying in state, which they both denied.

Phil and Holly faced considerable backlash, with a petition for the presenters to be removed from television altogether reached 73,000 signatures. 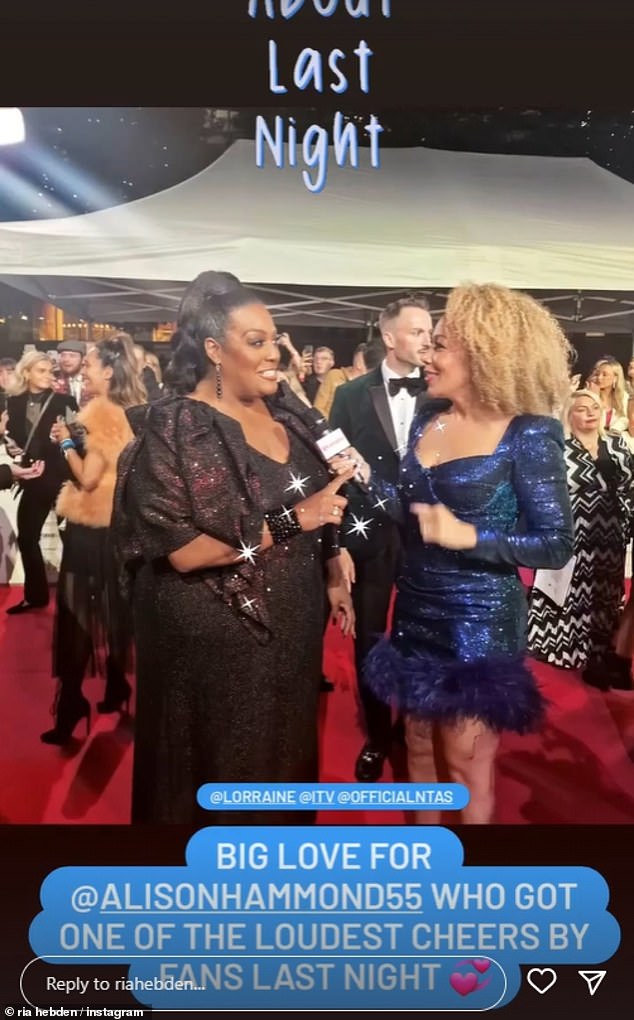 Words of love: Alison But recieved a flurry of congratulations from showbiz pals, including Lorraine’s Ria Hebden – who shared a gushing Instagram Story