Home » Celebrities » Annabel Karmel, the woman who weaned us off bland baby food 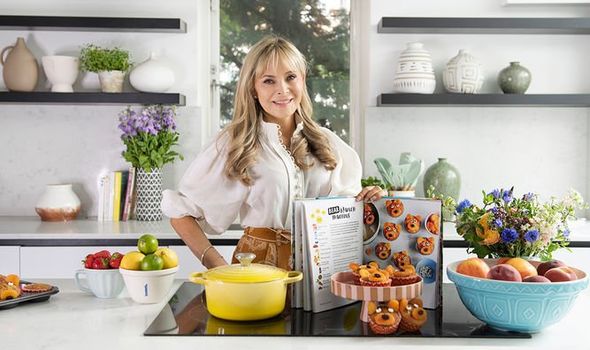 Until the age of 27, bestselling children’s food writer and recipe guru Annabel Karmel’s name was synonymous not with baby food, but with the harp. After training at the Royal College of Music, the woman who has single-handedly improved the nutrition and dietary prospects of millions of children over the past two decades appeared on TV chat shows hosted by Russell Harty and Des O’Connor.

She worked with Liberace, appeared in a Boy George video and even popped up as Cinderella in pantomime with Dennis Waterman and Rula Lenska.

“I had a harp in the on-stage kitchen,” giggles Annabel, 64. “I’d just got married and did 52 performances.”

But then her infant daughter Natasha died of an undiagnosed infection and in a single horrendous beat everything changed.

This heartbreaking loss was 37 years ago, but Natasha’s name is eased into our conversation by Annabel within the first few minutes – as the motivation for her second career, the one that earned her an MBE and which has been conducted with such elan that her children’s recipe app is the number one rated in Britain.

“I was a musician who really wanted to have children but who took quite a long time to get pregnant,” explains Annabel, whose latest hugely appealing recipe book — Fun, Fast & Easy Children’s Cookbook — is published next month.

Give children a real carrot to eat and they’re getting 100 percent carrot, not a three percent spray. There is no place for that in a child’s diet

“I gave birth to Natasha and one day, when she was three months old, I went into her nursery and she didn’t look quite right. I went to the doctor who gave me a lecture about how robust babies are and sent me home with instructions to give her herbal tea. I felt embarrassed for wasting his time. The next morning, her eyes were twitching. I went to get a second opinion from a doctor who said there was something seriously wrong with her brain.”

Natasha had developed a viral infection and died five days later of encephalitis (inflammation of the brain).

“I was a young mother, 27 years old, losing all my hopes.

“My friends had babies and avoided seeing me. My father had a stroke the same year. The bottom fell out of my world. I couldn’t play the harp.”

Annabel tells me all this at breakneck speed; perhaps speaking very fast makes it possible to utter the unspeakable. Deep in grief and traumatised by her cauterising loss, she became unexpectedly pregnant again. Initially, it was not the healing experience it might have been.

“Nick was born at home on our staircase. I was told I wasn’t ready to go to hospital but in fact, I was in advanced labour. I couldn’t reach the top of the stairs and Nick’s father had to deliver him. It was horrific; unbelievably terrible and frightening as you can imagine… thinking I was going to lose another baby.”

Two and a half hours later, her baby’s umbilical cord was finally cut by paramedics, and within a year her new career was incubated out of further trauma when the infant refused to eat.

“He was the world’s worst eater and the catalyst for my career. It was a nightmare weaning him. I was still grieving for my first child and was terrified by the thought of anything happening to this baby. I was really anxious to build up his immunity and try to find ways to keep him healthy and well.”

At the time, in the late 1980s, the supermarket aisles were full of bland food for babies in glass jars.

“This ‘ambient’ food had and still has an 18-month shelf life – older than the children it is being fed to,” says Annabel.

In an attempt to get her reluctant eight-month-old to eat, she began experimenting with new flavours such as chicken with grated apple on top – and sharing the successful recipes with the parents at the playgroup she was running.

These proved such a universal success they constantly clamoured for more and eventually encouraged her to write a book.

“I thought this book idea would be a great legacy for Natasha,” says Annabel. “But it took me a long time to feel normal again.”

After she found discordance among allergy specialists as to when children should start eating certain foods, such as eggs and peanuts, she decided to rely heavily on science, approaching the Institute of Child Health.

She also discussed her ideas with experts at Great Ormond Street Hospital in London and she set up a test kitchen for 20 children in her playgroup, which was a massive success. “Babies love flavour and the evidence, which is now mainstream, is that it is better to be exposed to potential allergens from six months,” she said.

“Research showed that withholding these foods until babies were 10 months or more — which was standard behaviour at that time — was in fact the worst thing to do.”

But initially no publisher would touch the book. “It felt like my fifth child,” says Annabel, who also has daughters Lara and Scarlett. “But 15 publishers turned me down and it was 18 months before it was sold. I couldn’t even find a literary agent; no one would take me on. A cookbook for babies? Now 70 percent of new parents make fresh food,” says the determined foodie pioneer.

“In my day there was very little in the way of international flavours. Spaghetti was a wow because it was from Italy.”

Since then she has gone on to write 42 more books, sold more than six million copies and become a go-to source for baby feeding advice. Today, the most popular ” ready meal for one-year-olds in her hugely successful frozen food range – which grossed £7.3million in 2017 and is sold worldwide – is chicken tikka masala.

“Things have changed massively,” she smiles.

“Parents are much more likely to experiment, while today’s young children love things such as quesadillas. Sushi is also hugely popular with children. This is fantastic because fish is so essential for growing brains, but I didn’t eat sushi until I got married at 24.”

Even now, her children love her food and while on one hand she talks proudly about how being an exemplar of hard-working-motherhood has inspired them, on the other she is clearly delighted that her 32-year-old son, an oil broker, has moved back home – ostensibly for the food. “He moved into his own house. But he got really ill with Covid and pneumonia and I nursed him back to health. Now he comes down in the morning to an array of food and he’s still here, 10 months later.”

Her daughters also want to move back home, apparently.

Annabel may have been on a one-woman crusade for two decades to improve childhood eating habits, but she remains as passionate as ever.

In Australia a factory has just been built to create the brilliant little healthy macaroni and broccoli balls that sell so well there and which are starting to revolutionise eating habits Down Under.

But Annabel doesn’t pull her punches. She reserves particular scorn for the booming toddler snack market. “Processed supermarket fruit snacks may be fruit-based but are generally in a sticky format that is ruining children’s teeth by sticking to them,” she opines.

“Meanwhile, the terrible inflated maize or corn snacks are sprayed with something containing a tiny bit of carrot. Give children a real carrot to eat and they’re getting 100 percent carrot, not a three percent spray. There is no place for that in a child’s diet.

“Everything a child eats should be nutrient-rich because their stomachs are so small. Mash a banana; don’t give them a Wotsit.”

Legions of freaked-out parents are grateful for Annabel

When my children were small, like so many other parents I bought my own indispensable copy of Annabel’s seminal book – Annabel Karmel’s Complete Baby and Toddler Meal Planner (republished for its 30th anniversary this year).

Even her name felt soothing. Karmel sounds a bit like caramel and with her glossy looks and soothing matter-of-fact manner, she guided me through this brand new world of weaning. With

Annabel by your side, it felt easy to segue from breast milk to solids with positive results.

It has remained the number one bestselling book on feeding babies and young children ever since.

It has also become the UK’s second biggest-selling non-fiction hardback.

Like legions of freaked-out new parents, dutifully I mashed avocado and banana together, as Annabel suggested, introducing a few drops of milk to stimulate recognition in a weaning child (it worked), and stayed up late to cook seemingly industrial quantities of pureed steamed vegetables before decanting them into ice cube containers for freeze ease.

Without following all these ideas, I’m not sure how I would have got through these tricky months.

As a tiny boy, my now 13-year-old son was a particular fan of olives, risotto and gherkins, and thanks to her early influence on their taste buds both children eat anything.