Anne Heche is ready to air out her years of silence regarding her highly publicized split from talk show queen Ellen DeGeneres — not to mention, how the comedian had apparently been trying to “bury” her career in the years since — and gurl clearly needed to get a lot off her chest!

On this week’s Better Together w/ Anne Heche and Heather Duffy podcast, the Wild Side star admitted she was “starting to be able to breathe again” after learning that Ellen’s show would be ending. She said:

“Apparently she has gone off to Africa to join her gorillas… What I’m feeling is, finally she’s enough away that I’m starting to be able to breathe again. It’s like fresh air a little bit, you know what I’m saying? You know what I feel like with Ellen in Africa? I feel a little bit like a new man.”

Why is she so unburdened all of a sudden? Because the daytime diva had been using her popular program as a “tool” to keep Anne from booking work, according to the actress’ co-host!

Referencing the rumors that Ellen had banned her ex from appearing on The Ellen DeGeneres show, Duffy said:

“We’re finding out information that blocked you in ways that we had no idea… What we’re finding is that show was held over apparently your head, as a tool, that if you’re on a show or in a film, they’ve got to go through the Ellen show to promote it — and guess what? Ellen blocked you from the show. And everybody knows that.”

It’s true. That rumor has been around for a long time, but having Anne finally confirm it is pretty striking. Guess she really does feel safer now that Ellen is spending her time at a gorilla sanctuary. Or as Anne shadily puts it:

“The other dominator is with her people apparently.”

Duffy went on to share that “friends” of hers and Heche’s who “have gone on the show have told us that they have been told specifically in the green room before they go on the show not to bring up your name.” Wow. Even her name was banned!

Heche compared being erased from Ellen’s talkshow presence to being prohibited from talking about their relationship when she went on The Rosie O’Donnell Show back in the ’90s, calling both experiences “horrifying.” She recalled being told she could not mention Ellen or being gay — despite the fact Rosie herself later came out — and feeling like she was being harshly censored. She added:

“I think we want to ask why one would have such a domain after 20 years of trying to shut somebody up, so much so that her name could not be whispered… Bury me she did, and by the way, she had a lot of people that went along with her.”

“If you think about all the studios, the TV shows, the films that considered you, and then thought, ‘oh wait, there’s that ‘Ellen c**kblock’ that we have to consider, let’s just hire Mira Sorvino.”

Wow. Talk about an abuse of power…

The duo then unpacked what led to Anne breaking up with Ellen in the first place. When Duffy asked why the Ohio native called it quits with Ellen, who she claimed “has always said she has no idea why ended it with her,” Anne teased:

“I think we can whittle it down to one thing: if we live in love and kindness, and that is my destination and my dream for us all, I would say that was not her goal.”

Inneresting! A very classy way of saying Ellen was a total mean girl. (Don’t worry, it doesn’t all stay quite so classy! LOLz!)

That answer brought the ladies to the subject of Ellen’s recent scandal, in which she was accused of being the opposite of the “Queen of Kindness” she touted herself as on TV.

When Duffy explained that kindness and love was the “banner” Ellen led with, Anne implied Ellen stole the idea — and wasn’t able to live up to it!

“Listen when you want to steal someone else’s language, the problem is you hit a wall. Because the language is enough to drive you fourth; its purposing was enough to give her power. The reality is, if you are not in a conscious conversation and communication with the universe and its truth, you hit a wall because you can only get further if your intelligence and heart meet. And unfortunately, that she did not greet.”

Basically, she’s saying Ellen stole the “be kind to one another” mantra from her. Wow!

Now on a roll, Anne made some other unsavory claims about the embattled superstar, including a claim that Ellen “called my mother” and “tried to put me in an institution.” (!!!) She shared:

“I have not rambled on about for one single moment, for twenty years I have withheld my understanding… every single truth I have spoken, I was hit more, buried more, f**ked more, or despised more, or then had visions and circulations of systems that spun me up and out of the system that would in any way challenge the fact that she was not telling her own truth, but another’s. Why do you think she tried to put me in an institution, folks?”

After the two discussed how Ellen had effectively erased Anne from her “history” on her show, the actress admitted there was another reason why she ended things with the Finding Dory star — her greed! She blasted the gazillionaire:

“I hope you like your money because that’s why I broke up with you! Do you like sitting on your piles of cash? Because guess what, it gets you exactly where you are. And by the way, baby, it’s what you wanted then and I hope you’re liking it now. Cheers.”

When asked to clarify, Anne explained:

“I broke up with her because her goal was to have a lot of money, and mine was to find love, and hers was, ‘I want $60 billion.’ Good, good luck; our forks are never going to meet.”

Yikes. This does not paint a pretty picture of Ellen.

By this point, Anne was ready to discuss other topics on the episode, but all the Ellen talk made her realize something about her ex that she found funny: she explained that all Ellen used to do is “drive Porsches” and then “she married one” — playing on Portia de Rossi‘s name.

Ready to move on, the 52-year-old ended the discussion on a note that seemingly sums up how she feels about the comedian:

Damn. That was clearly 20 years in the making!

What do U think about all these remarks, Perezcious readers? Sound off (below)! 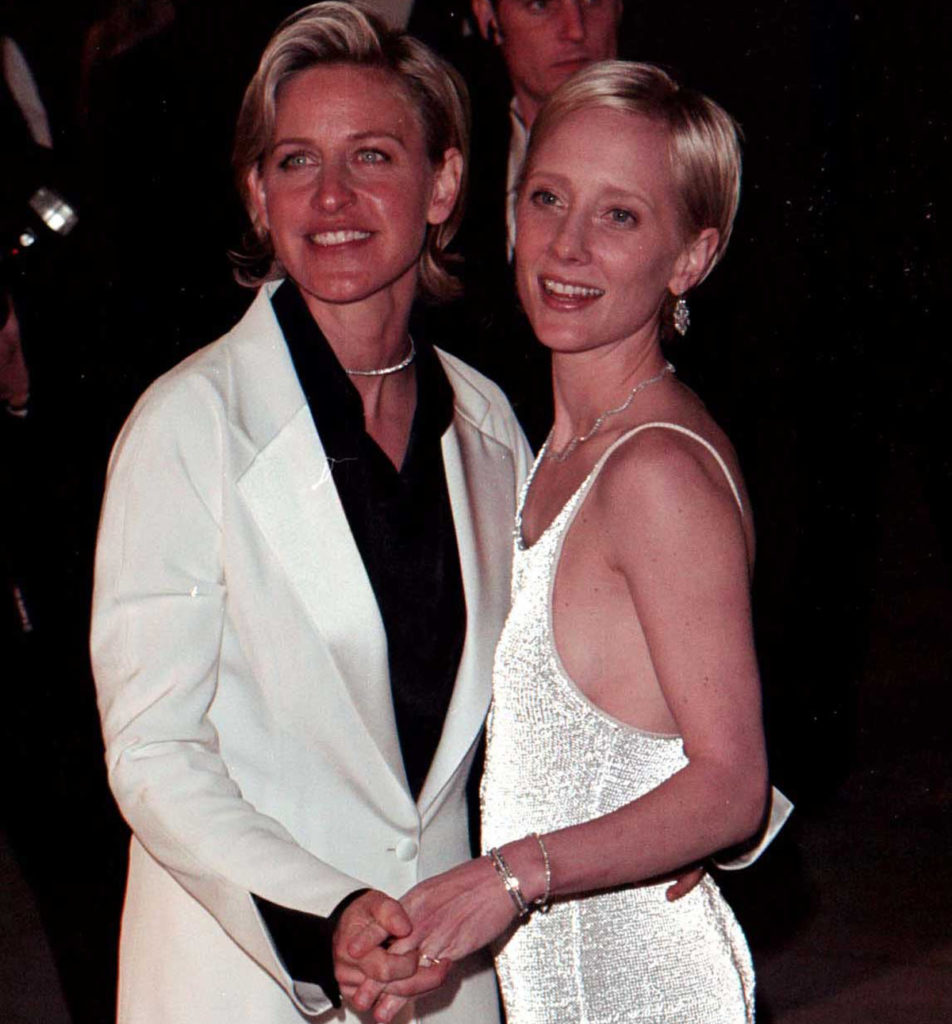