Home » Celebrities » Are Meghan Markle And Kate Middleton Working Together On A New Project?

Are Meghan Markle And Kate Middleton Working Together On A New Project?

At one point, Kate Middleton and Meghan Markle were not very close, but it seems like their relationship has improved. Ever since Meghan gave birth to daughter Lilibet in June, “Kate has been reaching out to Meghan a lot more.” A source told Us Weekly in June that “She’s sending [notes and] gifts and trying to build up a relationship.”

This is a vast improvement from the era of Meghan and Prince Harry’s explosive interview with Oprah Winfrey in March where she claimed Kate made her cry, according to the Daily Mail. The women moved past the incident, but Kate tried to do damage control before the interview aired. Royal commentator Camilla Tominey wrote Stella magazine: “I have been reliably informed she was even telling her friends before the Oprah interview that she did not think it was too late to ‘pull them back in.'” A source reportedly told Tominey that “Kate’s natural instinct is to try to smooth things over.”

Although Meghan and Kate did not appear to be BFFs, “they’re closer than ever and working on their relationship for the sake of the family,” Us Weekly reported in August. This improved relationship could even mean that they are collaborating on a new project — keep reading for more details. 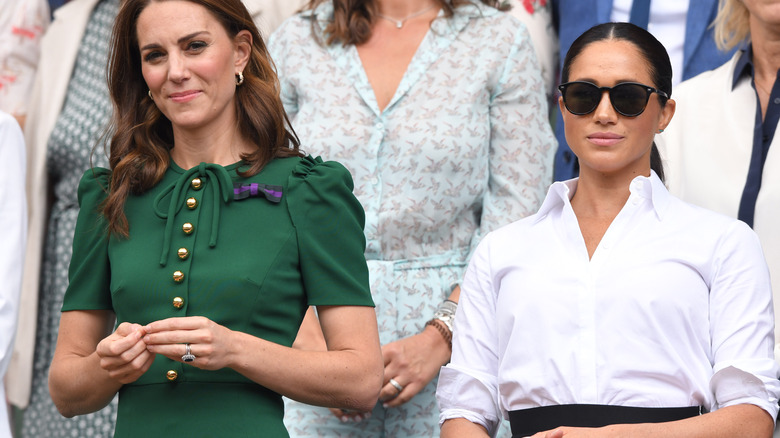 Lights, camera, action on what life is really like as a royal! According to Us Weekly, Meghan Markle contacted Kate Middleton to see if cameras could capture an “inside look” at her life. “Meghan and Kate are actually getting along really well and have been in touch more often,” a source told the outlet. “Meghan has been talking to her about collaborating on a project for Netflix, a documentary that will spotlight Kate’s charity work and the huge impact she’s made with her philanthropy.” Kate has thought about Meghan’s offer, but it does not seem like there’s anything in the works just yet. “Kate is very flattered, and it’s all very positive between them,” the source added.

In September 2020, Meghan and Prince Harry signed a deal with Netflix to produce documentaries, children’s TV shows, movies, and other projects. “Our lives, both independent of each other, and as a couple have allowed us to understand the power of the human spirit: of courage, resilience and the need for connection,” their statement read. The couple made it clear that they were not in this for the reported $100 million deal, as their “focus will be on creating content that informs but also gives hope.”

Adding Kate to their roster would surely delight royal fans across the globe!