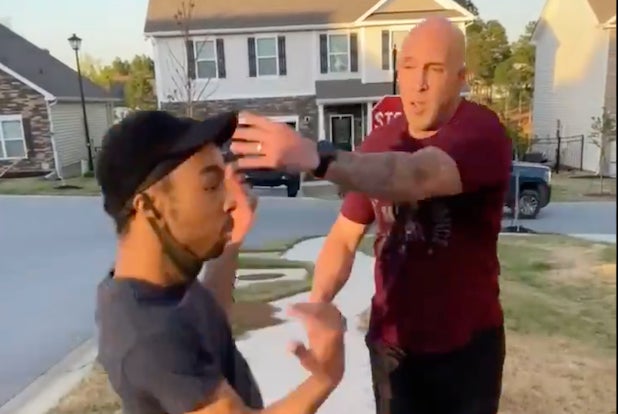 Jonathan Pentland, a white non-commissioned U.S. Army staff sergeant who appeared in a viral video threatening and shoving a young Black man, was arrested and charged with third-degree assault and battery on Wednesday.

Pentland, 42, is being detained at the Alvin S. Glenn Detention Center in South Carolina, according to online jail records.

It’s not immediately clear what took place leading up to the heated encounter. But video of the incident, which was first posted to Facebook on Monday and later circulated on Twitter, showed Pentland demanding that the young man leave his neighborhood and, at one point, shoving the man.

“I’m about to do something to you. You better start walking now,” Pentland can be heard shouting in the video. “You’re in the wrong neighborhood, motherf—er. Get out.”

The young man’s name is Deandre, according to Shirell Johnson, the woman who originally posted the video to Facebook.

Responding to video of the incent that circulated on Twitter, Fort Jackson Commander Brig. Gen. Milford Beagle, Jr. said he did not “condone” Pentland’s behavior.

“The leaders at Fort Jackson in no way condone the behavior depicted in the video posted recently,” Beagle said. “I remain deeply concerned for the members of our Army family, the young man and his family, and the tensions that activities like this amplify over time; please be patient as facts are determined.”