Beyoncé and Jay-Z were clearly ‘drunk in love’ during happy hour with friends. Bey shared photos of her and Jay’s night out, including one shot of her laying a tender kiss on her husband’s hand.

Something tells us that Beyoncé was feeling more than the alcohol during her date with Jay-Z. Days after Bey, 39, shared photos of her and Jay, 51, having a romantic moment in Las Vegas, the “Formation” singer shared a new set of Instagram Galleries on Monday (Apr. 19). In these new pics, Bey is wearing a glamorous green-and-grey cocktail dress. The outfit choice was fitting since she and Jay were apparently going to have drinks with friends. Clearly, there was romance in the air because, in one black-and-white shot (fourth pic in the gallery below), Bey is seen kissing her husband’s hand.

It was a beautiful moment of PDA between two people who just celebrated their 13th wedding anniversary. It appears Bey and Jay wanted to commemorate “Lucky 13” by heading to Las Vegas. The normally private Bey has been sharing scenes from the trip, including the black-and-red tweed outfit she wore while boarding the private plane to Sin City. She also shared a photo of her jeweled-encrusted handbag, but surprisingly, this would not be the most bling she’d rock during this trip.

That honor goes to the white outfit she wore for a date with Jay. In the photos that Bey posted on Friday (Apr. 16), she rocked a pristine, cream-colored suit. With her jacket open, Bey showed she was wearing no shirt, which only amped up the outfit’s sex appeal. To top it all off, Bey’s suit was covered in gold chains, many of which bore her name – “BEYONCÉ” – in matching 24-carats.

All of these photos prove that Beyoncé and Jay-Z’s marriage is still going strong after more than a decade. It’s had its ups and downs – including the major cheating scandal that led to Beyoncé’s Lemonade album and Jay’s 4:44. Despite that, the two have managed to stick it together, work out their problems, and stay together. 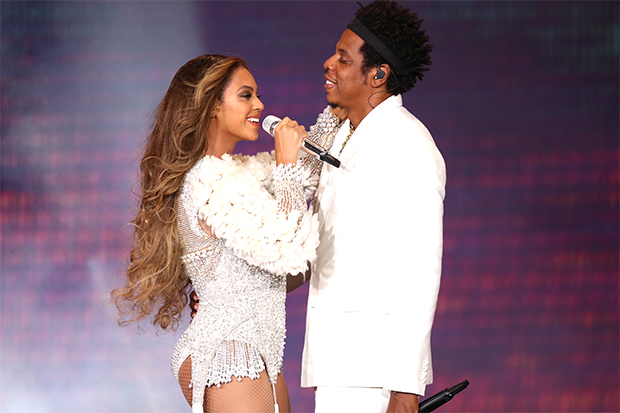 While these latest photos show Bey kissing Jay, there was a time when Benny Blanco thought he was going to get in trouble after he kissed Beyoncé – in front of Jay-Z! Benny, 33, was visiting the couple at their Hamptons home, and at the end of the night, he began to say goodbyes. “I went to do like, kiss on the cheek, and I guess we just missed a little bit. And just like, I definitely hit the corner of some sort of lip,” he said during a March episode of  The Zane Lowe Show. “I’m like, ‘Oh my God. This is the worst thing in my life.’ … And I look at Jay, and I’m like, ‘Oh, OK. I’m dead. My life is over. It was great. Nice knowing you guys.’” Thankfully, no one noticed – or, if they did, they didn’t think too much of it.