Home » Celebrities » BRIAN VINER reviews I Wanna Dance With Somebody

BRIAN VINER reviews I Wanna Dance With Somebody

I Wanna Dance With Somebody

Most musical superstars in recent years seem to have been the subjects of either documentaries (David Bowie, Bob Dylan, Amy Winehouse, The Beatles) or biopics (Elvis, James Brown, Freddie Mercury, Elton John).

With I Wanna Dance With Somebody, a dramatisation of her life directed by Kasi Lemmons, the late, great Whitney Houston does the double, in fact the treble: it is only five years since Nick Broomfield delved into the archives to tell her compelling story in Whitney: Can I Be Me, and just four since Kevin Macdonald’s similarly fascinating documentary, Whitney.

In the unlikely event of anyone summoning the energy, it would be interesting to watch all three films back to back.

Macdonald’s film alleged that, as a child, Whitney was molested by her cousin, Dionne Warwick’s sister Dee Dee. And Broomfield’s told us that the star’s mother, Cissy, also a fine singer, never conquered her jealousy. She felt that Whitney had the career she should have had. 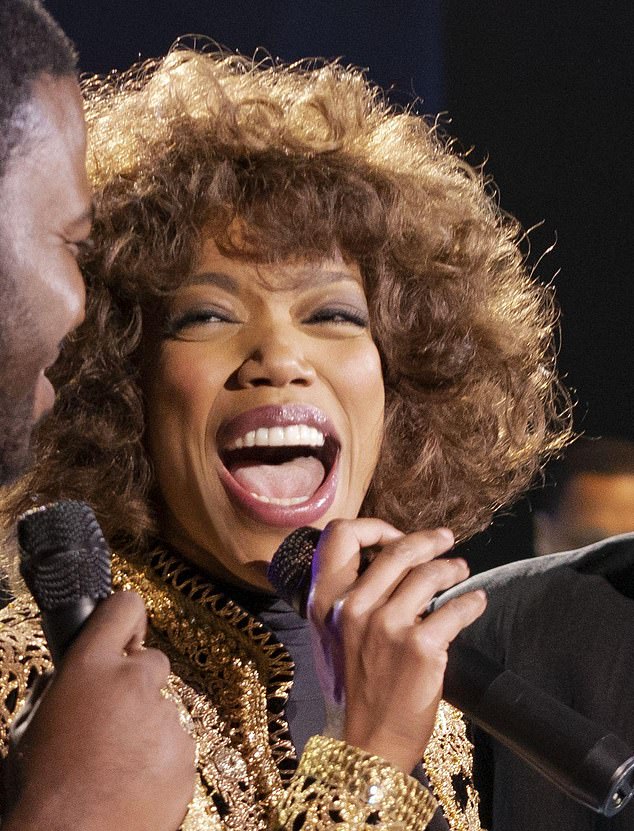 Kevin Macdonald’s film alleged that, as a child, Whitney was molested by her cousin, Dionne Warwick’s sister Dee Dee. Pictured: Naomi Ackie as Whitney Houston in I Wanna Dance With Somebody

Yet that’s not remotely how this biopic tells it. There’s no suggestion of abuse and Cissy (Tamara Tunie) is played as nothing but fiercely loving and supportive, feeding Whitney morsels of wisdom such as: ‘every song is a story… if it’s not a story it’s not a song’.

Indeed, according to Anthony McCarten’s script, it is Cissy who engineers Whitney’s big break by feigning laryngitis at a gig one night and pushing her daughter forward to replace her, knowing that influential record producer Clive Davis (Stanley Tucci) is in the house.

So which version is closest to the truth? Documentaries can bend the facts just as drama can. But what drama can give us that documentaries can’t is access to all the private, intimate moments in a life (unless, of course, you’re Meghan and Harry, who obligingly kept the cameras switched on).The soaring vocals are mostly Whitney herself, but Ackie does a fabulous lip-synching job. 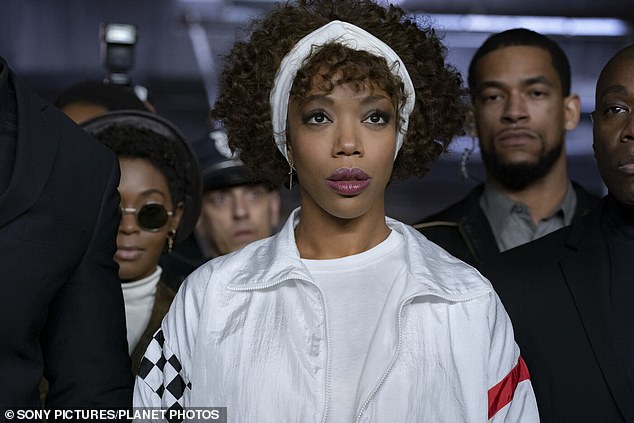 The soaring vocals are mostly Whitney herself, but Ackie does a fabulous lip-synching job. Pictured: Ackie as Whitney Houston

I Wanna Dance With Somebody does that nicely and is greatly helped by a powerful lead performance from British actress Naomi Ackie, making the most of her own big break. She truly inhabits the part, and is entirely plausible in the film’s flamboyant set pieces such as Whitney’s famous delivery of The Star-Spangled Banner at the 1991 Super Bowl.

The soaring vocals are mostly Whitney herself, but Ackie does a fabulous lip-synching job. Clarke Peters is very good, too, as her recklessly extravagant father. And Tucci is simply splendid, charmingly depicting Davis as a worldly-wise, honey-voiced sweetheart of a man, gently escorting Whitney into the celebrity stratosphere as she breaks The Beatles’ record for consecutive number ones.

Davis, by the way, though now a nonagenarian, is one of the producers of this film. So is Pat Houston, Whitney’s sister-in-law and manager. It is therefore not beyond the outer frontiers of possibility that there might be a spot of hagiography going on by those who consider it their job to protect both her legacy and their own reputations. 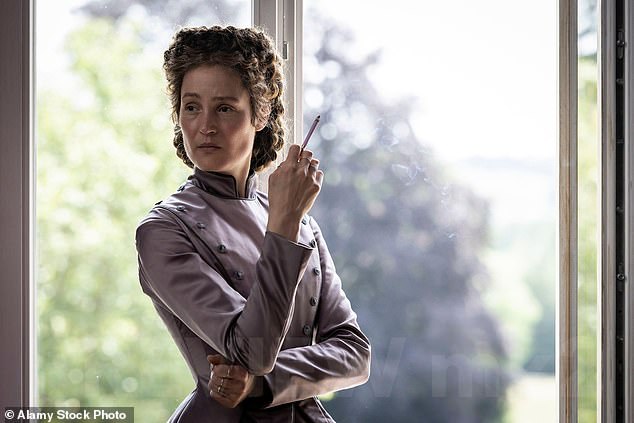 Corsage is another biopic of sorts, also about a singular woman, though one much less well known to us: the mid- 19th century empress, Elisabeth of Austria. Pictured: Vicky Krieps in Corsage

That said, even at two hours and 23 minutes, this is still a perfectly watchable picture about one of the most transcendent of all female vocalists, whose unhappy marriage to the self-styled bad boy of R&B, Bobby Brown (Ashton Sanders), accelerated her drug-addled journey to self-destruction. She was only 48 when she died in 2012.

What better way to get over the excesses of the night before than with this timeless gem containing some of the greatest hoofing in movie history, and some fabulous songs, too.

Its main problem, as so often with biopics, is not excessive dramatic licence, but that it tries to tell too much story, which even its hefty running-time cannot comfortably accommodate. So it makes a good job of some bits, a half-decent job of others and a mess of the rest.

For example, the anger among significant numbers of African-Americans that she was far too obligingly repackaged by white executives for white audiences suddenly looms up in the narrative, then just as abruptly disappears.

Nevertheless, if you don’t care about that and just want an excuse to listen again to that incredible voice, which at the end of the film especially is given full rein, and moreover to do so from a privileged seat in the stalls, then I Wanna Dance With Somebody is worth your embrace.

Corsage is another biopic of sorts, also about a singular woman, though one much less well known to us: the mid- 19th century empress, Elisabeth of Austria. She is beautifully played by Vicky Krieps, the talented Luxembourg actress who pulled off the near-impossible in 2017’s Phantom Thread by refusing to be eclipsed by Daniel Day-Lewis.

This German-language film’s title refers not to a buttonhole but a corset, which Elisabeth wears about as tight as humanly possible in order (she thinks) to preserve her fading beauty.

Otherwise, writer-director Marie Kreutzer playfully blends fact and fiction, lobbing cheeky anachronisms (a wall-mounted telephone!) at us as the moody empress picks her way enigmatically through a mid-life crisis.

Insofar as a film can be a living thing, this one is a little over-aware of its own strangeness. But it is elevated by Krieps’ performance and by a tantalising originality.

THERE have been some cinematic treats in 2022 and three of the most cherishable are listed below. Maybe it says something about me that they all turn the clock back to a bygone era and none of them contain computer-generated effects, superheroes or murders. But they are all sublime and, better still, they’re all now available to watch at home. Happy New Year!

THE beauty of Martin McDonagh’s picture lies in its simplicity; it’s a tale of two men (exquisitely played by Colin Farrell and Brendan Gleeson), on a remote island just off the Irish coast in the 1920s, whose long friendship is fractured when one tells the other he is bored with him. That’s pretty much it, but McDonagh mines comedy, tragedy and existential angst from their predicament. A glorious film. (Disney +)

THIS was the last feature directed by Roger Michell (Notting Hill) before his untimely death just over a year ago, and what a lovely valediction; a proper, old-fashioned, British comedy-drama, set in the early 1960s mostly in Newcastle, and telling the true story of an ageing street-corner orator who gets caught up in an unlikely art heist. He is superbly played by Jim Broadbent, ditto Helen Mirren as his long-suffering wife. (Apple TV)

WRITER-DIRECTOR Paul Thomas Anderson has hardly put a foot wrong since Boogie Nights in 1997. He’s at the top of his game again with this sparkling tale of a teenage entrepreneur in 1970s Los Angeles, who falls for an older woman (she’s 25). Debutants Cooper Hoffman and Alana Haim are irresistible; Sean Penn, Bradley Cooper and Tom Waits add the grizzled experience. A box-office bomb, yet an absolute joy. (Amazon Prime Video).