Charley Webb says the gym is 'giving her nightmares'

Charley Webb, who is best known for playing Debbie Dingle, revealed that she visited her doctor but is still unsure of her condition. The mum-of-three explained that she assumed her headaches are a cause of sinusitis but added she is still unsure as the pain has worsened.

The 33-year-old took to Instagram stories and addressed her concerns in view of her 502,000 followers.

The soap star revealed that her head was “hounding beyond belief” as she opened up about her issue.

Charley began: “Since I spoke to you all about what’s the best thing for sinusitis, I’ve been to the doctor’s and I don’t even know if it’s that.

“But it’s got so much worse. My head has been hounding beyond belief.” 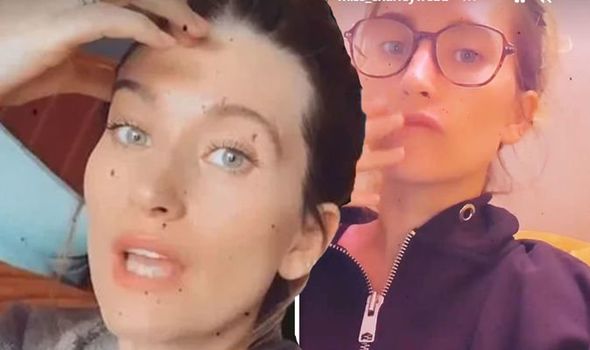 “I’ve had thumping up here,” Charley continued, as she pointed to the top of her head.

“And it’s not only when I bend over but it comes all of the time.”

She added: “Yesterday, was the worse. I don’t know if that’s common for sinusitis.”

The Debbie Dingle actress also added a caption to the post as she penned: “Don’t know if that’s common for sinusitis but never known anything like it!”

The ITV favourite went on to quiz her fans about their Bank Holiday plans following her candid admission.

Sinusitis is swelling of the sinuses, usually caused by an infection and symptoms can include a blocked nose, headaches and a toothache, according to the NHS.

Earlier this year, Charley had taken to the picture-sharing site and about a scary incident and urged them not to put off going to get checked like she did.

It comes as the actress had been suffering from breast pain and had to undergo tests.

Addressing the situation at the time, Charley explained: “I went to the doctors because I’ve been having this pain in my boob which I know is really personal but I wanted to talk about it because I put it off for ages.

“I put it off and put it off because I was so worried about going into them with anything at the moment, with everything that’s going on.”

“I just hope no one is feeling like that and if there’s something that you’re worried about then you should go and get it checked because there are other issues going on in the world, not just the pandemic.”

“There is other stuff and that’s okay. I’m really glad I did it. The hospital is dead,” she explained.

“She said they’re only seeing people if they really need to. And cause I had to be examined she had to see me.”

The actress told her followers that she had received her results and thankfully everything came back fine.

Taking to her Instagram stories once again, Charley divulged: “Nothing much to report just wanted to say I’m really pleased I posted that story yesterday.

“I can’t tell you how many people sent me messages yesterday, men and women, young and old, basically saying they felt the same and they’re putting off getting things checked and now they’re not.

“So, I feel like even though it felt really personal, and I thought, ‘Do I share this?’, sometimes it is uncomfortable talking about such personal stuff but it’s also really important too.”