CHRISTOPHER STEVENS reviews last night’s TV: A crossbow murder in Sherwood – and a Robin Hoodie to pin it on

The Chief Super is boiling angry. ‘Can we not do that?’ he barks at an underling who brings up Robin Hood after a man is killed by an arrow.

‘Start giving nicknames to wanted murderers? These are good people, I don’t want their tragedy turned into some tacky headline.’

DCS Ian St Clair (David Morrissey) in Sherwood (BBC1) better get used to the bad-taste puns. Every reporter will want to know if he’s bringing in the Merrie Men for routine questioning, and whether Friar Tuck has an alibi for the night in question.

This is Nottingham, and his boss really is the Sheriff (played by Sunetra Sarker). But St Clair has a bigger problem. This entire drama, supposedly serious and political, is teetering on the brink of becoming a Midsomer Murder. 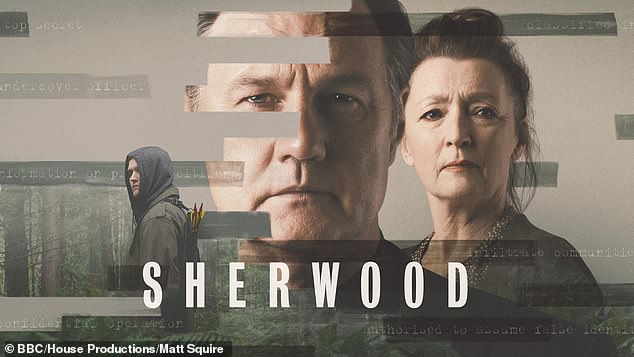 The victim, former miner Gary Jackson (Alun Armstrong), was shot through the heart with a crossbow bolt on his way home from the working men’s club. All his neighbours have a reason to hate him — and they’re all played by star names.

Lorraine Ashbourne is the head of the local crime family. Her son is the local cabbie and her husband (Philip Jackson) keeps targets in his barn where people can practise throwing axes. Gary loathed them, but then he was a man whose chief hobby was nursing grudges; at the wedding of the local Tory council candidate (Joanne Froggatt), Gary snarled, ‘Scab’ when anyone mentioned the bride’s father.

He spat the same insult at men he’d been drinking with for 30 years. Some in the town were trying to forget the Miners’ Strike of 1984, when flying pickets from the National Union of Mineworkers rioted to prevent rivals in the Union of Democratic Mineworkers from going to the pits.

Gary wasn’t forgiving or forgetting anything — fuelling a feud that divided his wife (Lesley Manville) from her sister and brother-in-law (Claire Rushbrook and Kevin Doyle). 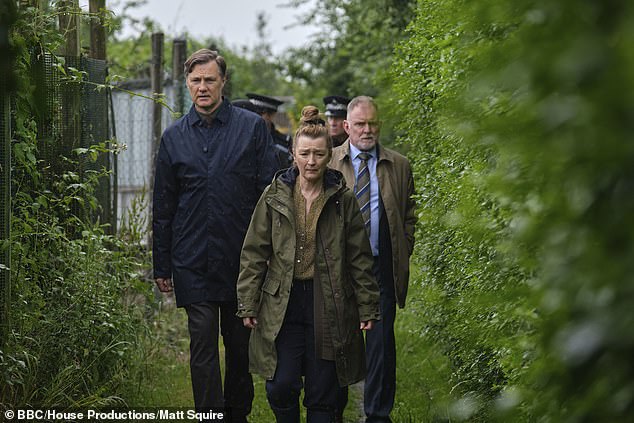 This is Nottingham, and his boss really is the Sheriff (played by Sunetra Sarker). But St Clair has a bigger problem

Just as in Midsomer, we were so busy spotting famous faces that it was hard to concentrate on the plot. I can’t shake the suspicion that, in the second episode tonight, another character will die an improbable death . . . killed in a sword fight on the castle battlements with 20 of the Sheriff’s men, probably.

We’ve already got a good idea who the murderer is, because one character is living rough in Sherwood Forest and practising his archery. He wears one of those sweatshirts that conceals half his head — yes, it’s Robin Hoodie.

He should have taken fashion tips from rapper Tinie (formerly known as Tinie Tempah, but he lost his Tempah). Tinie was sporting a handbag on a thong round his neck as he introduced Extraordinary Portraits (BBC1). He’s liable to garrotte himself if he’s not careful. 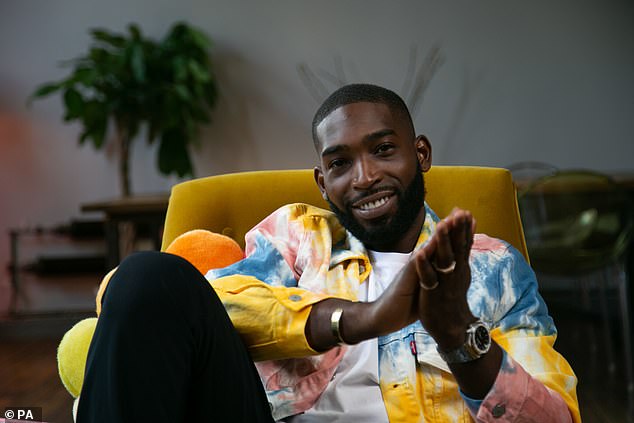 Tinie was sporting a handbag on a thong round his neck as he introduced Extraordinary Portraits (BBC1). He’s liable to garrotte himself if he’s not careful

Have a look at some photos of Mrs Thatcher, Tinie, or perhaps Dame Edna Everage, and you’ll see how to carry a bag properly.

He also wore a cable-knit pull-over with peek-a-boo holes under the shoulders. It looked half-finished. His guest Harriet Middleton could have given him tips — she helped to raise more than £100,000 for an MRI scanner at her local hospital in Lerwick, Shetland, by knitting hats.

Harriet was having her picture painted by the brilliantly quirky artist Stuart Pearson Wright, whose art combines the vividness of a photograph with the exaggeration of a cartoon.

He depicted Harriet in her favourite cardigan. She presented Stuart with a scarf, which thrilled him. ‘Sometimes I walk around the house in my underpants and a scarf,’ he said happily, ‘just keeping the important bits warm.’ Don’t we all?