Go Seahawks! Russell Wilson kicked off training camp for the upcoming NFL season with a few special guests: wife Ciara and their children.

No one cheers Russell Wilson on quite like his own family. On Sunday, the 32-year-old Seattle Seahawks quarterback’s wife Ciara, 35, their kids Sienna Princess, 4, and Win Harrison, 1, and Ciara’s son Future Zahir, 7, (whom she shares with ex Future) visited Russell at training camp for the upcoming NFL season. Ciara posted a series of snapshots — which can be seen below — to Instagram from the family visit. For the occasion, Ciara showed off her slim look while dressed in a cute black romper, while her husband was suited up in his regular football attire.

Russell looked so happy to have his family visit him at training camp. In one photo, Ciara kissed the superstar athlete on the cheek, and in another pic he grabbed ahold of Win and Future Zahir for a father-son group shot on the field. Russell also cradled baby Win and gave him a light kiss on the cheek in a different photo.

Meanwhile, Sienna looked hilarious (and super serious!) while posing in her dad’s oversized football helmet for another snapshot that Ciara posted. “It’s About That Time!” the singer wrote in her caption, adding a heart and football emoji. She also tagged her husband and included the hashtags “#TrainingCamp” and “#FootballIsFamily.” 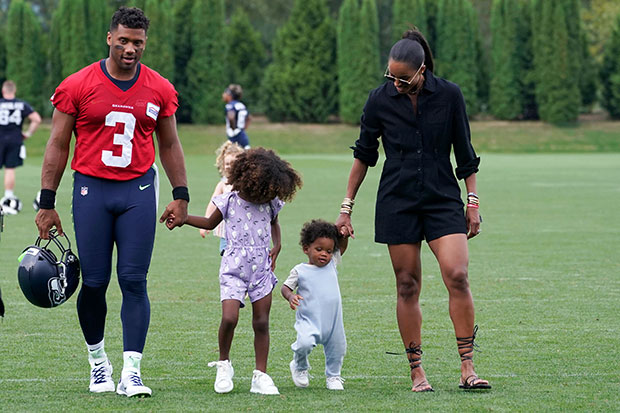 Ciara and her children are always cheering on Russell in his football endeavors. Back in January, during the 2020-2021 NFL season, the “Like A Boy” singer and the three kids all donned matching Seattle Seahawks jackets as the team took on the Los Angeles Rams in the playoffs. In the pic, the family of four all posed together in their matching attire on the steps outside their home. “We’re so proud of you @DangeRussWilson! Wish we could be at the stadium cheering you on today!” Ciara wrote in her caption.

Sadly, Russell and the Seahawks lost to the Rams and were eliminated from the playoffs. But his family still cheered him on — and looked great while doing so. Now, with another NFL season ahead for Russell, Ciara and the kids are ready to support the athlete all over again.