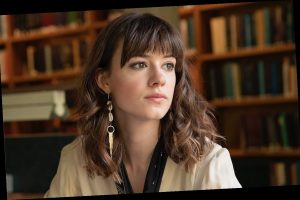 The ‘Normal People’ actress opens up about the origin of her famous bangs seen on her hit series, claiming she chopped off her hair after failing to land a gig.

AceShowbiz –Daisy Edgar-Jones has a post-rejection hair makeover to thank for her success – she adopted her famous bangs after losing a role.

The actress, who plays Marianne Sheridan in hit BBC series “Normal People“, became recognised for her character’s iconic fringe and now reveals she gave herself the hairstyle after failing to land a gig.

Appearing on “The Tonight Show Starring Jimmy Fallon“, she said, “It’s so funny ’cause my fringe came from a result of, like, not getting a part I really wanted. I was so sad and I was like, ‘Right, I’m gonna do a change, I’m just gonna chop off all my front bits of my hair.’ “

“And then after that, I got a job. So I do owe a lot of my career to… I seem to only be able to act if you can only see a partial amount of my face.”

However, Daisy’s bangs, which have their own Instagram account, grew “out of control” during the coronavirus lockdown and she had to ask her flatmate to trim them while her salon was shut.

“My poor flatmate had the responsibility of cutting it,” she laughed. “He did a pretty good job but it definitely went through lots of different stages and now I’m trying to grow it out and that’s stressful enough as it is.”

Daisy Edgar-Jones stars opposite Paul Mescal on the “Normal People”. It received four awards at the 72nd Primetime Emmy Awards, including Outstanding Lead Actor for Mescal and Outstanding Directing for Lenny Abrahamson.