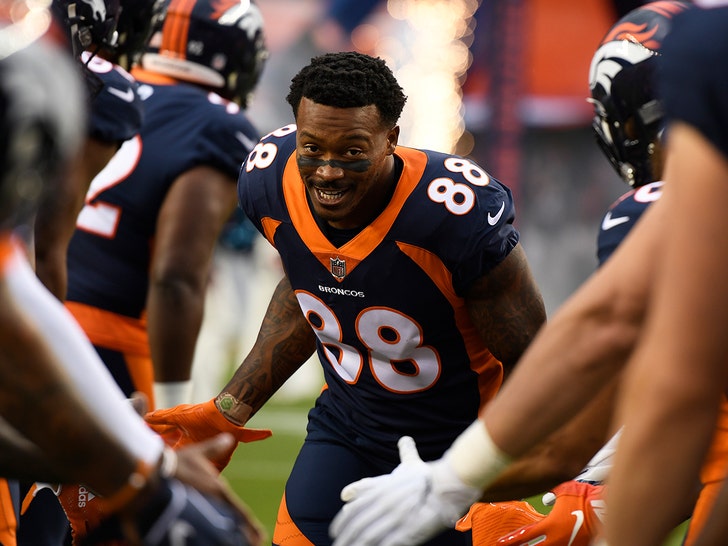 Demaryius Thomas was at the forefront of everyone’s mind this Sunday — especially for his former team, the Denver Broncos, who paid tribute to him … with an assist from the Lions.

The late wide receiver — who died suddenly last week — was honored during the opening minutes of the game … with just 10 men on the Broncos taking the field, and WR Courtland Sutton taking a knee on the sidelines as his team let the play clock run out.

It essentially served as a moment of silence — the significance of leaving Sutton/Thomas’ position vacated on the field was symbolic, almost like it was meant to be filled by him in spirit.

Denver was penalized for this, but the Lions declined the penalty … and let them play on as if nothing had happened — something the team seemed to be grateful for online. There was also a video compilation played on the jumbo screen before kickoff, which showed off some of Thomas’ highlights from when he was playing for them.

In addition to the on-field moment and the video, there were a number of other tributes set up all throughout the stadium, including a memorial that had been set up for Thomas that Peyton Manning and his family visited before the game got underway.

There was also a portrait of the guy that was on display in the tunnel, which players kissed and tapped as they made their way to the gridiron. And even on the field itself, the Broncos emblazoned Thomas’ former number, 88, right there onto the grass.

All this was to be expected … as we reported, the Broncos were pulling out all the stops to make sure their guy was recognized properly, as he was a big part of their SB run in 2016.

Thomas was found dead at his home on Thursday, with a call for cardiac arrest triggering a police response. It’s unclear what exactly happened to him — an autopsy is pending.