Home » Celebrities » For Every Time Donald Trump Has Been Controversial, This Moment Stands Above The Rest

For Every Time Donald Trump Has Been Controversial, This Moment Stands Above The Rest

Former President Donald Trump is not known for his tact. In fact, Trump made countless controversial statements during his time in the Oval Office. Perhaps you remember some of them. For example, during his presidential campaign back in 2016, he stated (via PBS), “You know what else they say about my people? The polls, they say I have the most loyal people. Did you ever see that? Where I could stand in the middle of Fifth Avenue and shoot somebody and I wouldn’t lose any voters, okay? It’s like incredible.” Or that time he told the crowd at a Las Vegas rally that he’d like to punch a protester in the face, per The Washington Post. There was also the moment he announced in an interview with MSNBC that he thinks women should be punished for seeking abortions.

Trump was also known for expressing his points of view on Twitter throughout the duration of his presidency up until he was permanently banned from the platform in January 2021 (via Twitter). He tweeted a lot about supposed voter fraud during the election against current President Joe Biden, often sharing false information, such as, “…This will be the most corrupt Election in American History!” (via Sky News).

Many of Trump’s supporters have praised his outspokenness over the years, while those who oppose him find his style crass and unflattering, to say the least. Whichever side you fall on, keep scrolling to discover the controversial Trump statement that stands high above the rest. 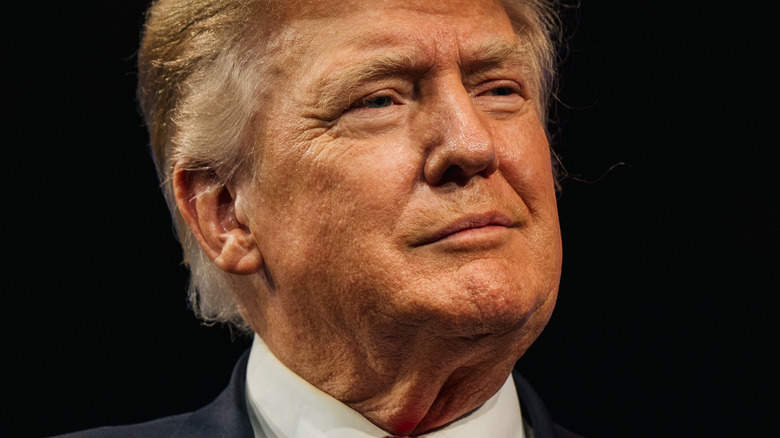 Of all of Donald Trump’s controversial statements, one that really stands out took place at the beginning of his presidential campaign in 2015, when he announced his presidential bid. He began his speech by stating that the U.S. had become a dumping ground for everyone else’s problems, specifically mentioning Mexico as a country that was “killing us economically.” Then he launched into the statement that would become one of the most iconic Trumpisms yet.

This wasn’t the last time Trump would reference Mexico in a derogatory way. During a White House meeting with California leaders in 2018, he expressed frustration that Mexican officials “do nothing” to prevent the flow of immigrants into the United States. “We have people coming into the country or trying to come in, we’re stopping a lot of them, but we’re taking people out of the country,” Trump said (via USA Today). “You wouldn’t believe how bad these people are,” he added, echoing his remark from 2015. Trump then went on to say, “These aren’t people. These are animals.”