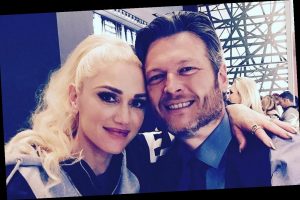 The ‘Hollaback Girl’ hitmaker says her boyfriend’s marriage proposal came ‘right on time’ because she ‘started to have a little insecurity’ about their relationship.

AceShowbiz –Blake Shelton‘s marriage proposal to Gwen Stefani came at the perfect time because the pop rocker had started to suffer from feelings of insecurity regarding the future of their relationship.

The “Hollaback Girl” hitmaker had turned 51 shortly before Blake popped the question in October (20), and Gwen admits her birthday had brought about an unexpected feeling of anxiety about their five-year romance, which began not long after the singer split from her former husband, Gavin Rossdale, the father of her three sons.

“It’s funny because he (Blake) had the ring and it was right around my birthday,” Gwen recalled on U.S. breakfast show “Today“.

“I was kinda getting a little bit anxious, like, ‘Wait a minute, what are we doing? I don’t need to ever get married again, but what is happening?’ I started to have a little insecurity so it (the proposal) was right on time.”

And although Gwen had had mixed feelings about walking down the aisle again, she knew early on in the relationship the love she shared with Blake was something special, after bonding over the pain suffered from their respective divorces from Rossdale and fellow country star Miranda Lambert.

She said, “I think that there was a lot to consider (regarding marriage) when you have so many people involved – children, and their hearts, everybody in my family, his family; we all went through a lot together, so I think in a romantic way, when you fall in love so hard and so unexpectedly so late in your life, you think, ‘I wanna marry you, like now!’ That’s the first romantic reaction, ‘Let’s get married!’ “

“So we always talked about it, of course, (but) then as the years were going by, it was sort of like, it didn’t happen and there was a lot of healing to do. So I think it was just natural.”

During the TV chat, Gwen also described finding love again so soon after heartache as a “miracle” as she sang the praises of her husband-to-be.

“What don’t I love about Blake…? He’s just such a good guy, he’s one of the most generous human beings and down to earth (sic),” she gushed. “It all sounds generic but it’s just all so true.”

“He’s so gifted and so unique and talented. He really is just my best friend and I feel just so excited that I have someone in my life that now I have a chance at happiness for a long time to come. It’s just a blessing, the whole thing, and it’s a miracle.”

Gwen’s comments emerge days after reports suggested Vatican officials had finally agreed to annul her 2002 marriage to Rossdale, allowing the Catholic singer to have her upcoming marriage to Blake acknowledged by the Church.