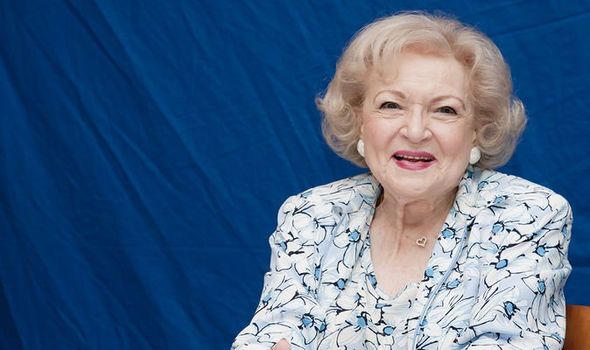 Michelle Obama and Oprah Winfrey led the accolades for the award-winning US actress who died on New Year’s Eve, just under three weeks before her 100th birthday on January 17.

Yesterday her Hollywood Walk of Fame star was surrounded by flowers and mementos from heartbroken fans.

She appeared in a string of top US sitcoms including The Mary Tyler Moore Show and more recently Hot In Cleveland.

While often cast as a ditsy blonde or sweet old lady, she was a smart operator and one of the first women in entertainment to take control of her career.

Former First Lady Michelle Obama, 57, who shared a birthday with the icon, said White had “broken barriers” and would be missed by people all around the world. Posting a picture of the actress with the Obamas’ late dog Bo, she wrote: “Betty White broke barriers, defied expectations, served her country and pushed us all to laugh.

“Barack and I join so many around the world who will miss the joy she brought to the world.

“I know Bo is looking forward to seeing her up in heaven.”

Dolly Parton said: “Betty will live forever, not only in this world but the world here after. I will always love her.We all will!”

And US President Joe Biden tweeted: “Betty White brought a smile to the lips of generations of Americans.”

Chat show queen Oprah Winfrey thanked White for her life and work. Sharing a picture of the pair together,Winfrey said she was, “celebrating 99 years of your love on the planet. Thank you Betty White”.

White was one of the first women to have creative control in front of and behind the camera with her 1950s sitcom Life With Elizabeth.

Born in Illinois she grew up in Los Angeles and got her first job in TV in 1939. Throughout the 50s and 60s she was a regular on game shows and talk shows.

She made many appearances on the game show Password. Host Allen Ludden became her third and last husband.

In 1973 she was cast as Sue Ann Nivens on The Mary Tyler Moore Show, playing a blonde TV host with a vicious and nymphomaniac streak.

What is happening where you live? Find out by adding your postcode or visit InYourArea

The script described Sue Ann as “a sickeningly sweet Betty White type”, and White recalled that when “they couldn’t find anyone sickening enough” they gave her the part. She won two Emmys for the role.

A new generation grew to love her as Rose Nylund in The Golden Girls, a sitcom about a group of retired women sharing a house in Miami, Florida.

Co-starring Bea Arthur, Rue McClanahan and Estelle Getty the show with its theme song “Thank You For Being a Friend” and its take on everything from sex to death became a worldwide hit.

White summed up the show’s appeal by saying: “I think we were just truly funny.”

Such was her longevity in TV, White’s last sitcom, Hot in Cleveland, came to an end when she was 93 years old.

During her career, she wrote several books and won five Primetime Emmy Awards.

She also holds the world record for the longest TV career.

Last night the producers of a documentary about her career said a screening of the film on what would have been her 100th birthday will still go ahead.

The film includes interviews with stars including Ryan Reynolds and Robert Redford talking about the veteran actress.