Home » Celebrities » How many camels am I worth? TikTok users worry over camel calculator in latest trend

How many camels am I worth? TikTok users worry over camel calculator in latest trend 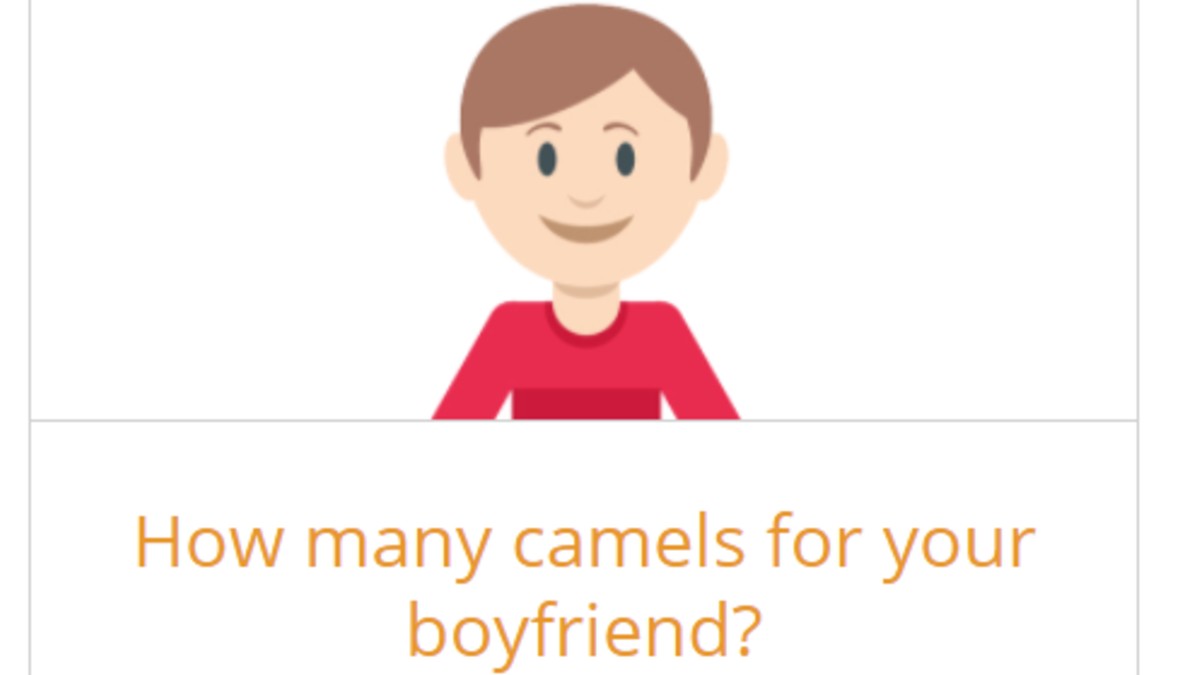 There’s a new viral craze sweeping through TikTok and other social media platforms, and it’s all about determining your worth by number of camels.

The internet quiz allows you to input answers to a number of questions about your significant other, which then leads to a so-called calculated result that gives your boyfriend or girlfriends worth in camels.

But don’t worry- it’s clearly not a scientific result and should not be taken seriously in any way.

That’s said, it’s not as ridiculous as it sounds when you consider that camels were traditionally seen as a symbol of status and wealth.

The quiz, aptly named Camel Calculator, first asks you to select if it’s your boyfriend or your girlfriend you’ll be evaluating, and then you will be presented with questions on age, height, hair length, and color.

Once you’ve worked out your partner’s height in centimeters, you’ll then get a couple of gender-based questions, which focus on either beard length or boob size.

It then does a quick calculation and gives you the number of camels it thinks your subject is worth. The whole process only takes a couple of minutes at most.

The higher the number, the better, obviously. It’s been reported that the highest number seems to be 110, and nobody has yet admitted to getting less than 12.

Of course, everybody online is entering their own measurements to determine how many camels they might be worth. And many folks are taking the test over and over again with slightly differing answers in an attempt to increase their net camel worth. Surely, those are tactics that a seasoned camel seller would be wise to.

Many TikTok users have filmed themselves looking increasingly depressed as they took the test and were disappointed with the results.

One TikTok user claimed that an individual had once offered her parents 40 camels to buy her off when in Morrocco. She was subsequently delighted to learn that she was actually worth 107 camels. In the video, she didn’t reveal whether or not her parents had taken the offer.

Folks on Twitter have been sharing their scores and making jokes in the process. A common problem seems to have emerged- people are avoiding working and studying so they can calculate each other’s worth in camels.

One Twitter user admitted that they’d prevented their friends from important study work so that they could discuss how to “optimize their camel worth for a whole 15 minutes.”

Some folks were a little upset about their results; one Twitter user complained that TikTok had made them really insecure about how many camels they were worth.

Whereas others were delighted with the result, another Twitter user claimed that they had been greatly cheered by learning that they were worth a lot of camels. 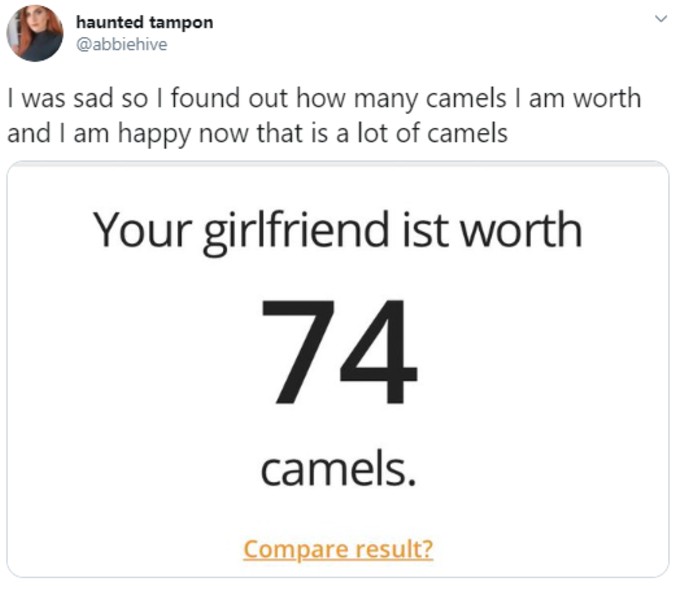 Viral internet crazes are nothing new, and there’s been a few really few ones on TikTok in recent weeks. Last month, there was the cool Anime Face App filter that allowed users to turn themselves into an anime character. It’s really impressive in the way it moves with your facial expressions.

And last week, there was a TikTok craze that involved googling seemingly innocent questions about your favorite childhood cartoon characters. Through a glitch in Google’s algorithms, the search results were coming back with hilariously dark and disturbing answers.