Hugh Jackman received his medal as a Companion of the Order of Australia at an investiture ceremony at Government House in Canberra on Friday.

"Mr Jackman's distinguished career, his compassion and his heartfelt patriotism have brought great credit to Australia and he is deserving of our highest praise," the Governor-General's secretary Paul Singer said. 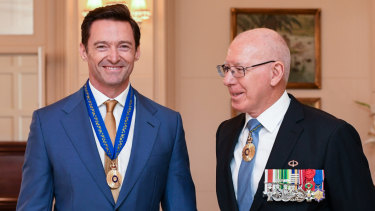 Hugh Jackman is awarded an Order of Australia by Governor-General of Australia David Hurley on Friday. Credit:Tracey Nearmy/Getty Images

The Hollywood and Broadway actor was recognised in June's Queen's Birthday honours for his contributions to the performing arts and work advocating for ending poverty. At the time, he said being appointed to the highest merit in the Order of Australia was especially emotional and humbling.

"I am an immensely proud Australian, and am so grateful for the opportunities I have received by being raised there," Jackman said.

His portrayal of Wolverine in the X-Men films was among the many on-screen performances lauded in the honours list. Jackman's stage career has also been celebrated, including the lead role in The Boy from Oz.

His philanthropic efforts include work with the Fight Cancer Foundation and Broadway Cares/Equity Fights AIDS.