Home » Celebrities » It Starts On The Page: Read The Series Premiere Script For ‘The Flight Attendant’ By Steve Yockey

At a time when we were all locked down during the pandemic, it was fun to revel in a jet-setting, high-stakes and hijinks world, and HBO Max’s freshman series The Flight Attendant delivered that and showed a Kaley Cuoco we’ve never seen before, able to play various shades in spades.

While Flight Attendant played like a James Bond girl in reverse spy comedy series, it also at its core dealt with the anguish and the morning after of alcoholism.

“In Case of Emergency” penned by creator Steve Yockey, is where Flight Attendant takes off. An adaptation of Chris Bohjalian’s novel, the series begins with Imperial Atlantic flight attendant Cassie Bowen, played by Cuoco, who sneaks a drink when she’s up in the air but parties hard when she’s on the ground. She connects with first-class passenger Alex Sokolov (Michiel Huisman) en route to Bangkok. He’s a mysterious, alluring guy. She heads to dinner with him. Then back to his hotel for an evening together. But when Cassie awakes, Alex is lying next to her with his throat slashed. But Cassie blacked out, and can’t remember what led to this mess.

Yockey detailed Cuoco’s talent for pulling off the many sides of Cassie during the filming of “In Case of Emergency.”

“There was this scripted breakdown that Cassie has in the hotel room in Korea when she’s getting drunk by herself and sort of really feeling the extent of Alex, the kind of what she saw that morning and the anxiety around it. It’s maybe a paragraph of description in the script. (Our director) Susanna Fogel was like, ‘I’m just going to let you go in the hotel room,’ because we filmed in a real hotel room, not on the set, ‘and the only person that’s going to be in there is our DP and a cameraman, and we’re just going to do it.’ And Kaley, for my money, blew the doors off. She really got to the heart of what this woman who has all of these secrets and is now being forced to carry another one, and is also drunk, and the kind of like, the kind of self-reflection that’s forced upon you when your alcoholic haze takes a turn, takes a dive, and I thought she captured it all so brilliantly, and honestly I didn’t have any questions about whether Kaley could pull it off.”

The Flight Attendant is produced by Warner Bros Television, Berlanti Productions and Cuoco’s Yes, Norman Productions. Berlanti, Cuoco, Yockey and Sarah Schechter serve as EPs, and Suzanne McCormack is co-EP. Meredith Lavender and Marcie Ulin were also EPs on “In Case of Emergency” with Jess Meyer a co-EP.

Here is the script, the latest in Deadline’s It Starts On the Page series highlighting the words that serve as the creative backbones of the now-underway TV awards season. These scripts are being submitted for Emmy Awards consideration this year and have been selected using criteria that includes critical acclaim, selecting from a wide range of networks and platforms, and a mix of established and lesser-known shows. 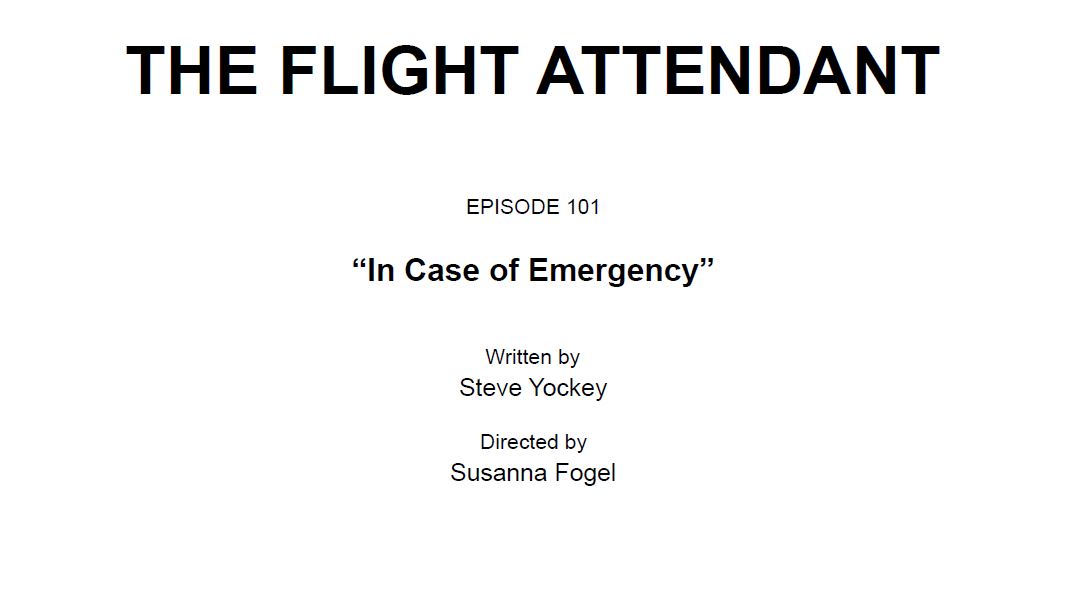 It Starts On The Page

It Starts On The Page: Read The Pilot Script For ABC’s Comedy ‘Home Economics’

It Starts On The Page: Read A Script From Season 3 Of ‘The Chi’ Written By Justin Hillian

HBO Max, It Starts On The Page
World News