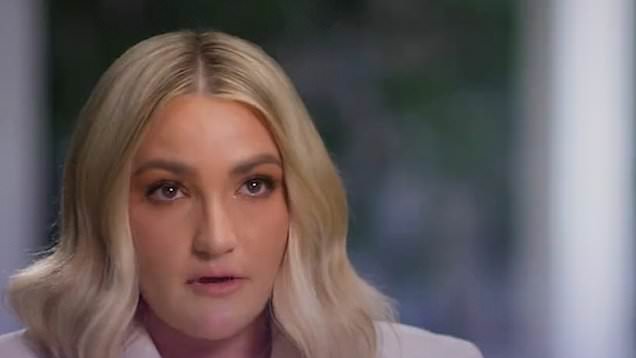 Jamie Lynn Spears has opened up on her rift with sister Britney Spears in her first interview on Good Morning America.

The former child star, 30, had appeared on the show in support of the release of her memoir, Things I Should Have Said, which Britney has previously appeared to make a dig at.

Jamie Lynn was visibly emotional in a clip shared by GMA, in which she is heard saying: ‘The love is still there, 100 percent. I love my sister. I’ve only ever loved and supported her and done what’s right by her.

‘And she knows that, so I don’t know why we’re in this position right now.’

Presenter Juju Chang then probed: ‘But things have gotten complicated?’

The interview also discussed the strained relationship with her sibling, who was freed from her conservatorship last year.

Britney and Jamie Lynn’s relationship appeared to break down around the time the conservatorship rule was removed, with Britney unfollowing her sister on Instagram earlier this month.

The Toxic star 40, previously hit out at her sister for not speaking out in support of her dating her legal battle.

Jamie Lynn has said that her memoir, which will be released later this month, will cover topics such as her struggle with mental health and coping with being a teenage mother.

She wrote on Instagram: ‘My story about MY life from being a child actress, a teen mom, a young woman a single woman, a working mom, battling my mental health, falling in love, finding peace, experiencing a true MIRACLE…

‘Creating my own family, and trying my best to give my children the childhood and family I always wanted. January 18th.’

Jamie Lynn had announced the memoir in October 2021, telling her followers: ‘Back In 2017, after Maddie’s life changing accident, I felt a strong conviction to share my story, but there was a lot of personal work and healing that had to happen before I could share my truth the proper way.’

Her daughter Maddie narrowly avoided death after accidentally driving into the water whilst on an all-terrain vehicle (ATV) in 2017.

Jamie Lynn shares Maddie with ex-boyfriend Casey Aldridge, having had her when she was 16. Her second daughter Ivey was born in 2018, who she shares with businessman Jamie Watson.