Jennifer Carroll Foy Is Fighting To Be The 1st Black Female Governor Of Virginia: ‘It’s Time’

Jennifer Carroll Foy, 38, who is a mom, a state legislature and a public defender, wants to make history as a role model to millions of ‘brown’ girls — ‘it’s hard to be what you can’t see.’

When Jennifer Carroll Foy was growing up as a young girl in Petersburg, Virginia, she had to sit with her aunt at her kitchen table trying to make the agonizing decision about whether the family was going to pay their mortgage or buy the medicine they needed for her sick grandmother.

Now, 39, and the leading challenger to former Virginia Governor Terry McAuliffe , Foy hopes to be elected as the Democratic nominee for Virginia Governor and then face off against a Republican nominee in the November 2 election. But Carroll Foy is undaunted by the battle to convince Virginia voters that she is the best choice to make their lives better. “I don’t have to empathize with people who are hungry, going without healthcare and living paycheck to paycheck,” the mother of 3 year-old twin sons, told HollywoodLife in an exclusive interview. “I understand, because I lived it.”

The former public defender who successfully flipped a red district blue in 2017 and was elected as a delegate to Virginia’s House of Delegates, had already triumphed over long odds in her life. And she is well aware of what a history-making moment it will be if she becomes the first Black female Governor in the country, if she succeeds in her quest. “There are millions of young Brown girls, who have never seen a Brown woman lead this nation and are yet to see one lead any state,” she points out. “It’s truly unfortunate that in 2021 that we’re still having these conversations. But that’s where I come in. Because breaking down barriers and blazing trails, where none exists, is something I’m used to doing.”

Yes, she has. Carroll Foy graduated from the prestigious Virginia Military Institute on a full scholarship, in just the third class that admitted women. The hazing from some male classmates did nothing to deter her and in fact she met her future husband, a fellow student, Jeff, there. Then with the support and some training from the progressive organization, Run For Something, she launched her long shot campaign for the House of Delegates.

” I was running against the establishment candidate , and Republicans wanted to hold on to that seat tight, so it was a tough race. But I had the foundation of Run For Something ,and the support of my community to win,” she recalls.

She campaigned non stop despite being pregnant with her twins,  knocking on endless doors to meet voters, while battling morning sickness. She had to finish the last weeks of her campaign, on bedrest. Just getting elected as a pregnant candidate was a huge accomplishment.

Then she had a near death experience after childbirth that only made her more determined than ever to fight for her Black female constituents as the delegate in her Second District seat, and now potentially as governor of Virginia. Black women are two to three times more likely to die from pregnancy related causes, according to the CDC.

After giving birth to premature twins Alex and Xander, at just 22 weeks, Foy found herself in agony from disabling pain which was ignored by her doctors and nurses, and “the pain only worsened after she left the hospital,” she explains. “We [Black women] are not believed and not heard. After giving birth to my identical twin boys I remember feeling pain worse than labor and complaining to my nurse and being dismissed and being told that it’s normal and to take more painkillers.

But I was still sent home,” she relates. “I’ll never forget falling to my knees in excruciating pain and my husband saying ‘this can’t be right, this can’t be normal’ and he rushed me to the emergency room… I was informed that if I had stayed home just a couple more days, I would have lost my life. But, you should not have to have a Jeff, in order to survive childbirth. What every person in Virginia deserves is a governor who understands that in the 10th wealthiest state in the nation, we should not have Black women dying at third world country rates.” 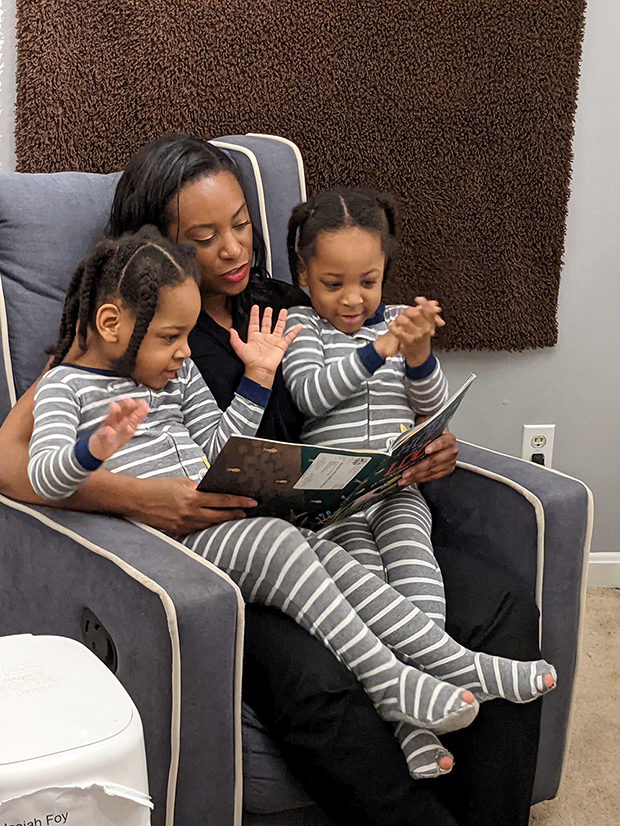 Foy calls it another example of her “lived experiences” that qualify her to be elected governor. Now, potentially as Virginia’s next governor, she wants to pass legislation making the use of doulas during and after birth, covered by Medicaid “so women get the culturally competent care we deserve and the advocates we need.” As well, she wants to make the investment into a maternal and infant mortality review board, which will investigate how to reduce the number of Black women dying during and after birth. As a delegate, Foy already voted to pass Medicaid expansion which extended healthcare coverage to 400,000 more Virginians.

In her new campaign, Jennifer Carroll Foy is betting that Virginia voters are ready to reject politics and politicians as usual. And that the state which definitely went blue in 2019 – from its governor to its House of Delegates – is ready for a progressive governor like her. “It’s time for working families to be represented by a working mom who has walked in their shoes,” she tells HollywoodLife “I understand their challenges, and I’m going to bring forth solutions,” says the candidate who is still a working mom, even as she campaigns.

Foy has continued her practice as an attorney who is a public offender, while she makes her case to voters. Not surprisingly, she puts making full day pre K available to every 4 year-old in Virginia, a top priority, if elected to the top spot in the state. “It addresses the issue of inaccessibility and un-affordability for childcare for so many Virginia families, while also addressing the educational divide that starts as early as age 3 or 4 for many of our children here.”

She is also committed to ending mass incarceration in the state and getting rid of the cash bail system which “has almost single-handedly contributed to the explosion of our jail population. We have more people sitting in jail before their court date, many that haven’t been found guilty of a single thing yet. Because they can’t, they’re too poor to pay for their freedom.”

If Carroll Foy is successful in defeating her chief opponent for the democratic nomination, the popular former Governor Terry McAuliffe, she has very good odds of being voted in as governor, based on Virginia’s recent political history. 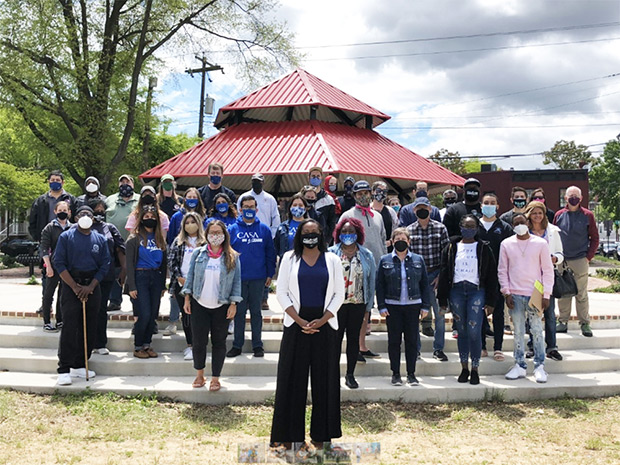 The candidates vying for the Republican nomination for governor have been described as ‘Trumpy, Trumper and Trumpian’. All support Donald Trump‘s ‘Big Lie’ that the election was stolen from him, and they sound like clones of the former president at his most belligerent. Foy, herself, just sounds sad when she describes her potential rivals. “Unfortunately, the Republican train has gone off the rails… they are just married to this burning dumpster fire on the Republican party platform. It doesn’t work for anyone. There’s nothing that they’re talking about that’s going to change people’s quality of life.”

But changing Virginians quality of life isn’t just Jennifer Carroll Foy’s mission, it is going to be the focus of her husband, Jeff, as well, who is also an attorney. As the potential First Gentleman, Jeff Foy has already decided on ‘his platform; and Jennifer admits that she is excited for him. “He wants to combat homelessness here in Virginia. He wants to effectively end veteran and LGBTQ plus homelessness within 100 days. He already has planned out policies he wants to help implement.”

For now, Jennifer is effusive about how supportive Jeff is during her campaigns. “The demands of a campaign are continuous, it’s very demanding… so having him have my back is exceptionally important. Even tonight (we talked at 8:30 at night) he made dinner, he fed the kids and I’m going to do the books, bath and bed. “

If she makes it into the Virginia Governorship she knows she will continue as she does now to cope with ‘mommy guilt’, but she will handle all the competing demands the way she does now by compartmentalizing. “When I’m with my twins I am 100% with them. I’m not checking emails, I’m not on the phone. I’m completely focused on making memories with my babies. So that the memories they do have are us having a great time doing the things that they like. That’s what matters.”

And what is she hoping that Alex and Xander think of their mom, when they are older. “That my boys grow up and say ‘my mom was super cool. She was able to get it all done.’”