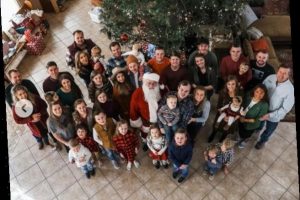 There is always a lot to say about Jim Bob and Michelle Duggar and none of it is ever good.

But few could imagine that their obsession with gender and gender roles could make their Christmas traditions so very weird.

The Duggars have a lot of extreme beliefs.

Though they clearly despise American society and culture for our freedoms of thought and having a choice over our own lives, a lot of their extremism is rooted in everyday ideas.

You don’t have to be a member of a fundamentalist cult to have a weird fixation with gender and gender roles … but the Duggars can take it further than most people would guess.

The Duggar family is built upon control, micro-managing everyone’s thought and behavior at all times to guarantee conformity.

A huge part of that conformity is about gender roles.

There’s more to it than the girls yelling “Nike” to warn their brothers about a normally dressed human woman nearby, though yes, blaming women for men’s lust and condemning natural human sexuality are two key components.

The women in the family, from Michelle to her youngest daughters, wear baggy and unflattering skirts and dresses.

They are also tasked with household tasks, from cooking to cleaning to of course the endless chore of childcare.

Meanwhile, the boys are required to perform outside labor, such as yardwork and construction.

Jim Bob and Michelle, who are about as trustworthy and believable as anyone who hides sex crimes committed against their own daughters, insist that their kids enjoy the gendered structure of things.

In reality, of course, the Duggar children have no freedom of opinion or expression, and are exposed to very few ideas that their parents do not force upon them.

However, when the Duggars get older, they start to realize that their family was different in ways that they didn’t realize … and that some of these differences were incredibly toxic.

Jill and Derick have recently been opening up to fans on social media.

In a recent Q&A, Jill shared that her family’s extreme views on gender even extend to gift-giving on Christmas.

Given the massive scale of the Duggar family, they do not all buy presents for each other.

Instead, they have a Secret Santa system — each family member picks a name and then goes to buy gifts for their designated recipient.

That sounds normal, if normally more for fandom communities or office parties than for families. So where does gender factor into it?

According to Jill, the family is split into four categories.

These categories are the big girls, the big boys, the little girls, and the little boys.

Each group only draws names from their own category, with no crossover Secret Santas between the age groups or the genders.

It’s not that anyone objects to a system that would prevent any of the Duggar daughters from having to give or receive presents with Josh, of course.

But … that is just a weird system.

In real life, plenty of boys and girls like the same things, and we all know that liking the same things isn’t the same as being able to buy things for each other.

But that is not really the point. The point is separation — treating men and women as separate species instead of individuals divided by a social construct.

In real life, gender is complicated. In the Duggar world, gender is as simple as night and day — and there’s no such thing as dawn, dusk, or an eclipse.