Kim Kardashian and Kanye West still haven’t filed for divorce, but all signs point to their split being permanent. According to a source who spoke with Page Six, Kanye moved personal items out of their Calabasas home—including 500 pairs of sneakers. The move went down when Kim was on vacation because “they both felt it would be less dramatic without both of them in the house.”

On top of this, fans recently noticed that Kim turned Kanye’s closet into a Skims showroom, so yeah—looks like his stuff is gone: 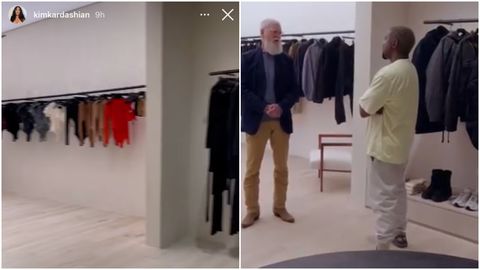 This news comes amid an update from People, which spoke to a source that confirmed Kim and Kanye fully aren’t talking: “Kim and Kanye continue to live separate lives,” the source claimed. “They have no contact. Kim stays focused on the kids and work. She is very busy and seems happy,”

So…when will Kim go ahead and file? According to People’s source, “her issues with Kanye are a big part of the final season of Keeping Up With the Kardashians,” and she will likely “file for divorce when the season has aired.”

You betcha these little magnetic travel containers are TSA-approved. Plus, they’re super cute.

According to TikTok, these leggings will make your ass look like a juicy snacc.

A cult-icon for a reason, this is the best hair-dryer brush overall.

If “sandwich” magnetic lashes aren’t for you, try this genius magnetic eyeliner.

If you want a rabbit that does more than just vibrate in place, this is it.

This is hands-down the best at-home laser hair removal product for leg hair.

More than 28,000 reviewers say this is the best hair straightener on Amazon.

Cheeky, lacy, and oh so sexy. No wonder they’re a bestseller.

You love all the nitty-gritty deets on celeb gossip. So do we. Let’s overanalyze them together. ✔️