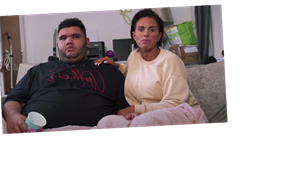 Katie Price has revealed she got her son Harvey his own house as he gears up to go to residential college.

The 42 year old, who recently told her eldest child that he will be a Network Rail station announcer, took to her YouTube channel to post a clip to open up about the new arrangements.

The former glamour model could be seen wearing a beige jumper with her brunette short bob styled back as she sat next to her son, who is partially blind, autistic and suffers from Prader-Willi syndrome.

Harvey appeared happy next to his famous mum and wore a black T-shirt for the occasion as they both sat underneath a pink furry blanket.

"So I've got this house for Harvey," she started in the clip. "It's enough room for me to stay – basically it's a three-bedroom house I've got him for what he needs for all of his stuff."

Katie, whose ex husband Peter Andre recently called Harvey "the best" over the new documentary about him, went on to explain that the house is a way for her boy to transition into residential college with ease.

She continued: "I've been doing it up a bit for him and I've got it for him until he goes to residential, to get him used to the transition.

"And yes he's already made some holes in the walls and stuff, which I'll keep plastered plus I'm trying to keep on top of everything but also make it like a nice home for him.

"So as you can see there's bits and that everywhere, but next time you visit this house we'll give you a tour of Harvey's house."

She then turned to Harvey and asked: "What do you think? And you can help us do the tour – show off your new bed, new bathroom, your kitchen… What else do you want to show everyone?"

Harvey replied: "The curtains," as his mum added: "And the curtains. Yeah? And we'll show 'em all the cameras that we've got everywhere so we can keep an eye on you as well."

Katie previously spoke out about how Harvey sometimes punches the window screen when his "routing goes wrong" before adding: "I could have shown all that [in the documentary] and show all the smashed tellies lined up outside ready to be dumped.

"But I’m not really going to gain anything from all that. It's enough you see all the holes in the wall."