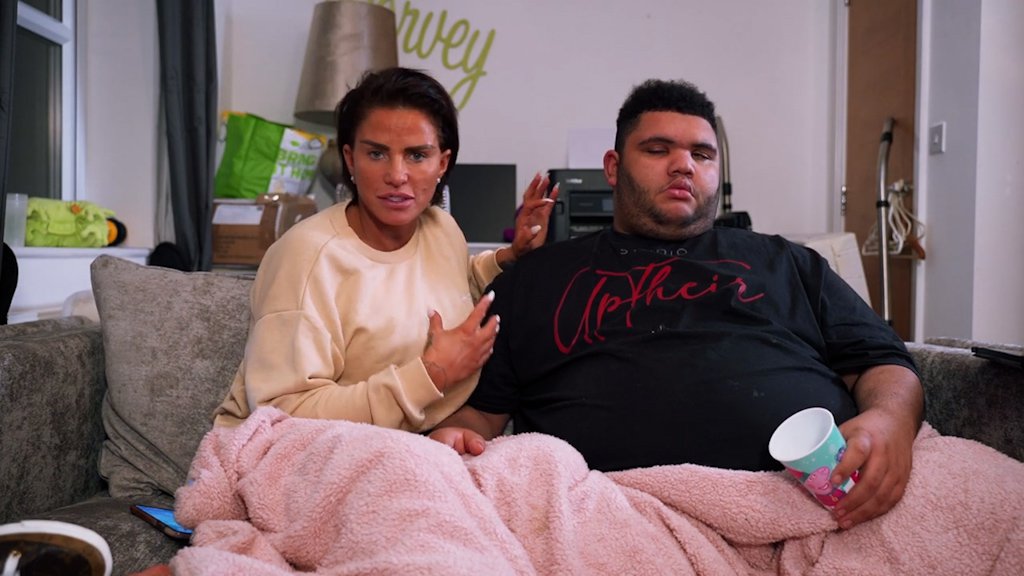 Katie Price has revealed that her son Harvey has had his first coronavirus vaccine as he is classed as clinically extremely vulnerable.

The former glamour model, 42, revealed that Harvey, 18, was ‘so brave’ when he received the Oxford/AstraZeneca vaccine on Friday.

She told The Sun: ‘It’s felt strange being in a school hall with everybody sitting on chairs in rows a metre apart.’

Katie added: ‘Harvey was the youngest we saw there, it was all smoothly, calmly and professionally done.

‘Harvey was so brave and it was over so quick, everybody [was] so helpful. It just felt like being in a film and made you realise more how serious this is.’

While it is still mainly over 70s receiving the vaccine in most parts of the country as the rollout continues, people with illnesses and disabilities which make them extremely clinically vulnerable are also being offered the jab.

Harvey was born with a combination of complex conditions, including Prader-Willi syndrome, septic-optic dysplasia, ADHD and autism.

Katie recently shared an insight into life with her son in their BBC documentary Harvey & Me, showing what the pair are going through to try and find a residential college to look after Harvey.

The film showed them looking around various facilities to find the perfect one for Harvey to live at and continue his education now he is 18.

Harvey was filmed having a meltdown at one of the colleges they visited, as he hit his head repeatedly on a door after becoming overwhelmed.

Katie admitted that the documentary only showed a small glimpse of his meltdowns as she didn’t want to ‘exploit’ him, but to educate others on the difficulties he faces.

She also recently revealed that his weight has reached over 28 stone, which can also mean catching coronavirus would be more dangerous for Harvey, so the fact he has had his first jab means he is more protected amid the ongoing pandemic.