Home » Celebrities » Kelly Ripa Jokes Mark Consuelos,50, ‘Gave Up’ As He Looks Fitter Than Ever In Gray Tank Top – Photo

Kelly Ripa Jokes Mark Consuelos,50, ‘Gave Up’ As He Looks Fitter Than Ever In Gray Tank Top – Photo

Kelly Ripa took to Instagram to share a steamy throwback photo of her husband Mark Consuelos after a workout on July 29!

Kelly Ripa, 50, loves showing off her husband Mark Consuelos, 50 — and we can see why! In her latest Instagram picture on July 29, the talk show host poked fun at her husband on his attire and fitness regime. In the photo, the Riverdale star is wearing a gray tank top which showcased his muscles and defined abs along with a pair of navy blue shorts.

“#tbt one year ago, when the air conditioner gave up, so did @instasuelos,” Kelly quipped. Celebrity friends and fans immediately sounded off in the comments to the latest #thirsttrap. “You and MC are doing Gods work. Thank you.” Lisa Rinna stated alongside a fire emoji. One fan even commented, “OKAY, Ripa we see what you working with,” alongside heart eye emoji as well as a few others.

This isn’t the first time the hot couple has shared sexy photos of each other. On July 22, Michael, 24, joined his mom and her TV co-host Ryan Seacrest on Live With Kelly and Ryan to state he is not embarrassed by his parents’ sexy Instagram posts. When Ryan asked about a recent photo Kelly shared of her and her hunky husband on July 19 Michael shared his thoughts.

“Oh man,” Michael replied, prompting a response from his mom. “What? What do you mean?” Kelly grilled her son. “You know what I mean,” Michael responded, and the trio shared a laugh. “I think it’s fine,” Michael finally admitted. In the post in question, Kelly is leaning over in a chic black one-piece bikini as Mark stares at her rear in excitement. 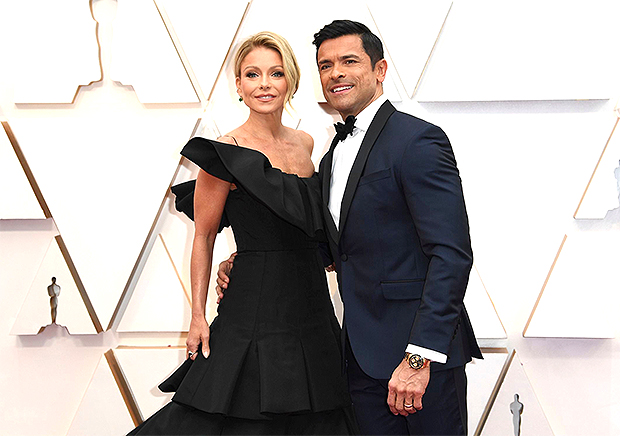 Distance isn’t a dealbreaker with these lovebirds. Even when they’re not together, they’re honoring their relationship in various ways. In an interview with People, the actor shared that he and Kelly weren’t together for their 25th anniversary. While Kelly got a tribute tattoo on the inside of her elbow with the date “5.1.96”, Mark opted to read “beautiful” cards and letters from the All My Children alum to celebrate the milestone anniversary. “I always keep them for every anniversary. She’s a great writer, and so I always look forward to reading what she has to say,” the actor continued. “It’s been 25 years [but] there’s always something new and exciting to read.”

When it comes to compatibility, Kelly and Mark have plenty of it. From steamy photos to appreciation posts, these two keep the spice alive in their longstanding marriage. In addition to Matthew, Kelly and Mark also share children Lola, 20, and Joaquin, 18.