The ‘FEFE’ rapper makes use of his Twitter account to clarify his concerning behavior during his December 3 sit-down with Zias and B. Lou for their YouTube reaction channel.

AceShowbiz -It’s save to assume that Kodak Black is fine despite sparking concern with his recent interview. The “FEFE” rapper made use of his Twitter account to clarify his behavior during his December 3 sit-down with Zias and B. Lou for their YouTube reaction channel.

In a now-viral video from the interview, Kodak says that he’s “tied,” which Zias and B. Lous assumed as “tired.” Later, the Pompano Beach-born star worried fans when he said that he’s “like tired, like he dead. They dead like flies. Flies everywhere when you dead.” The YouTubers, meanwhile, were awkwardly silent as they seemingly didn’t know how to react.

As soon as the video hit the web, fans took to Twitter to express concern about the star’s mental state. “What’s going on with Kodak Black? Man is on another plane of existence here. Hope he has some good people around him. This s**t is sad,” one fan tweeted. “Kodak Black looking like he just went through some CIA sleep deprivation torture,” another person opined.

Others, meanwhile, believed that Kodak was high during the interview. Someone else added, “I think they did this to go viral…yea they shoulda did it another time but if you don’t care about ya self who will? Kodak admitted to doin meth and other drugs and said he was depressed. Fame will kill you when you can’t handle it. He needs help.”

Kodak eventually caught wind of the video. Clarifying that he didn’t do drugs at the time, the “Super Gremlin” spitter said on Saturday, December 4, “Lol I B Fakin Like I’m Sleepy Ion B High Guys I Get Drug Tested Consistently.”

In a separate tweet, he went on to explain, “Dat mean ion really wanna talk or ain’t hearing what you saying forreal when I close my eyes like dat ! Anyways a n***a be up 18 hrs skr8 everyday grinding.” 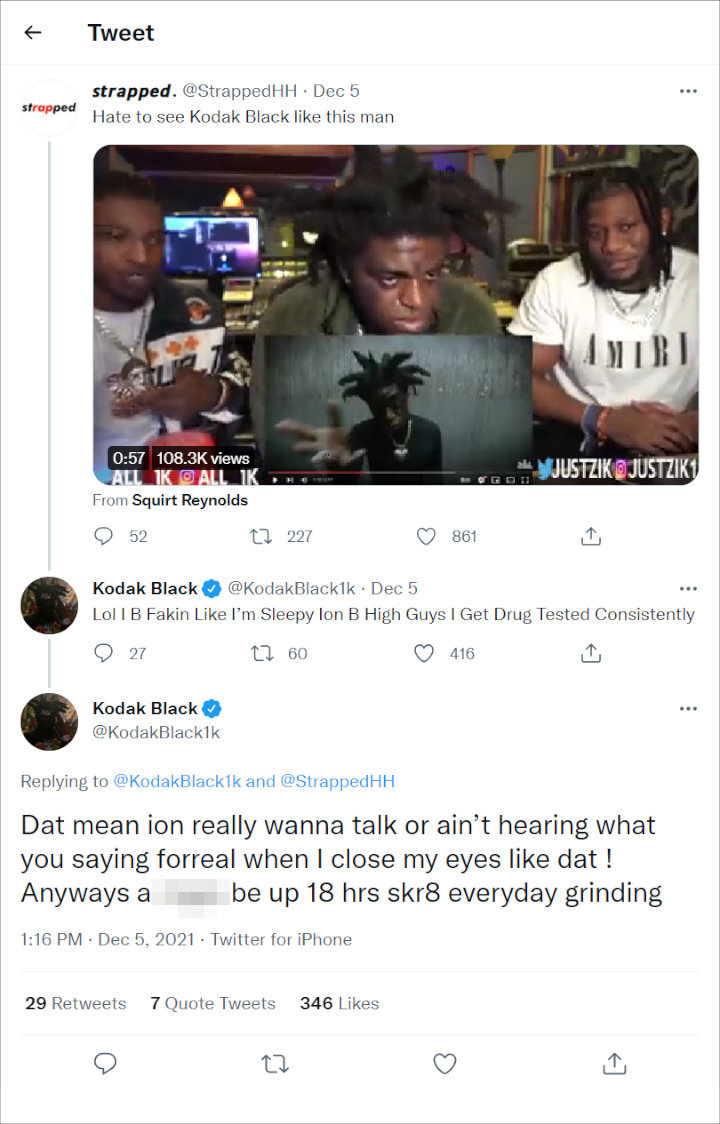 Kodak Black clarified his concerning behavior in a recent interview.

Railing behind him, a fan told Kodak, “People just so quick to judge a person!! Don’t even bother with em just stay in yo lane and keep pushing! You been putting pressure on the industry!” One other user said, “aight kodak good to hear just looking out for you bro fr.” However, someone criticized the star, writing, “So why waste they time and show up for a interview?They deserved better. But they ended up doing numbers off his reaction anyway.”