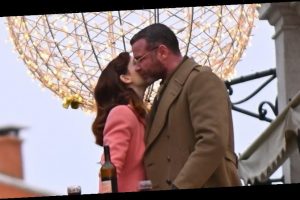 Liev Schreiber leans in to give a kiss to co-star Matilda De Angelis as they continue to film their movie, Across The River and Into The Trees, in Venice, Italy on Monday (January 25).

The two stars have been spotted all around the Floating City over the course of the month shooting the movie based on Ernest Hemingway‘s final novel.

Liev and Matilda were seen standing at the center of the famous Rialto Bridge that goes over the Grand Canal and shared a kiss after a glass of wine.

Moments before and after their shared on-screen kiss, Liev was seen with his face mask back on during the moments when cameras were not rolling.

Josh Hutcherson will also star in the flick, which centers on the character of Richard Cantwell, a war-ravaged American colonel stationed in Italy at the close of the Second World War, and his love for a young Italian countess.