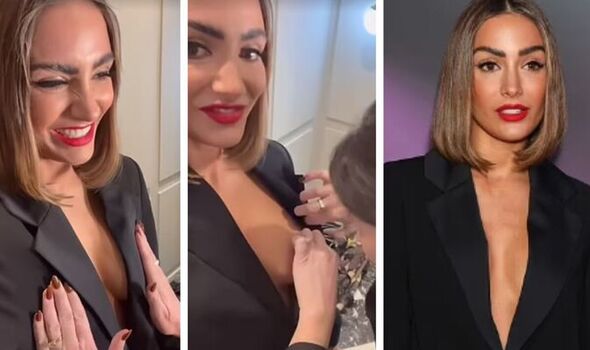 Frankie Bridge’s stylist assisted her with applying her nipple pasties

As if to demonstrate that the preening work of a gorgeous model is never done, Frankie Bridge shared footage of her assistant affixing nipple pasties and tape to her breasts behind the scenes, while she laughed hysterically and quipped: “The girls are fine.”

Frankie Bridge, 33, was one of last night’s most prestigious guests at the Glamour Women of the Year Awards, held at Outernet London.

The former The Saturdays girl group member always looks impeccably dressed – but she has since shared a photo demonstrating that the path to a sexy sense of style isn’t always effortless.

She uploaded footage of an assistant applying nipple tape to her body as she prepared to wow the crowds topless with just a blazer to disguise her assets.

To nip any possible wardrobe malfunctions in the bud before they began, her aide stuck silver love heart pasties onto the presenter’s breasts.

Despite laughing hysterically backstage over the awkward moment, Frankie looked nothing less than cool, calm and collected when she walked the red carpet moments later in a black trouser suit and chunky heels.

Frankie Bridge looks embarrassed as she gets a pat down

Frankie Bridge dazzled in her own brand trouser suit

Frankie Bridge is no stranger to going braless

The Loose Women star’s sexy strapless PVC dress scarcely covered Frankie’s bosom when she donned it at the Attitude Awards this autumn, but she quipped: “If you can’t go all out for @attitudemag awards…. When can you?”

Frankie Bridge dared to bare when she went braless yet again while she modelled this cobalt blue trouser suit – this time not from her own range, but by Oasis.

Alongside Frankie and Una were glamorous Rochelle Humes, Vanessa White and Mollie King – and the five were hugely popular until they sadly split in 2014, leading to calls for a reunion.

Frankie Bridge is in demand with her former bandmates