Money Saving Expert Martin Lewis, 48, took to Twitter to call out a claim by a social media user that his interview with Rishi Sunak was staged. After watching the financial expert interview the Chancellor of the Exchequer about his Spring 2021 Budget, one of the presenter’s followers claimed that it was “obvious” the politician had advance notice of the questions.

He had no advance notice of the questions

In view of his 1.1 million Twitter fans, the financial journalist hit back at a suggestion that claimed he had told the Exchequer the questions he was planning to ask.

Martin’s staunch denial came after he asked his fanbase to let Rishi know their thoughts on the interview, in the hope that he could “do the same next year”.

The TV presenter wrote: “Just a subtle note, regardless of what you think of what the chancellor’s stance, if you appreciate the fact he came on the show and was willing to take questions, feel free to tell him.

“It may help us get to do the same next year.” 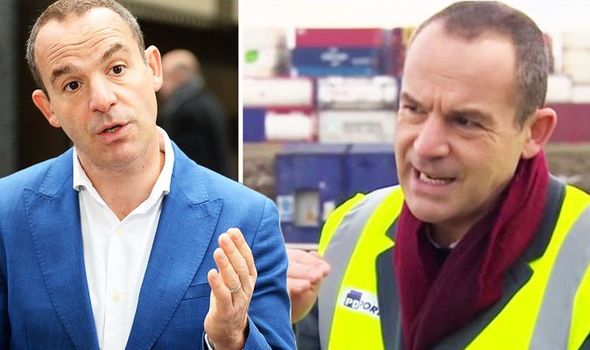 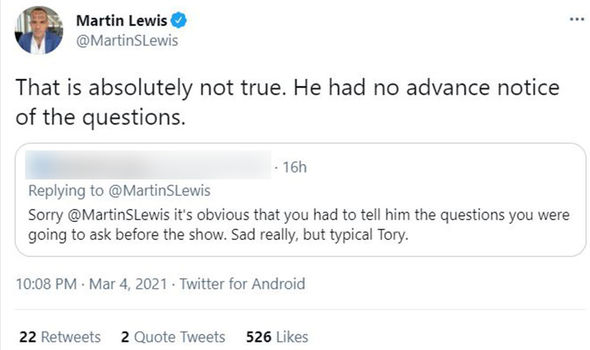 However, one of Martin’s followers thought the tweet disingenuous and claimed it was “obvious” the journalist had shared the questions with the politician before the interview.

They wrote: “Sorry @MartinSLewis it’s obvious that you had to tell him the questions you were going to ask before the show.

But the Money Expert was quick to hit back and dispute the unfounded claims. 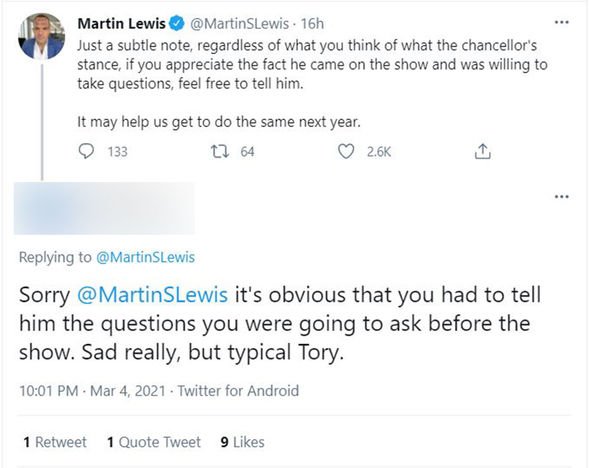 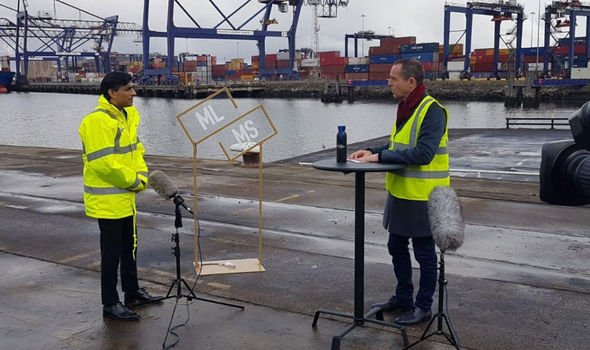 Martin replied: “That is absolutely not true.

“He had no advance notice of the questions.”

The presenter’s followers were quick to back him, with one branding the baseless tweet as “nonsense”.

They wrote: “Based on what evidence would you conclude this? What a load of nonsense.”

Another penned: “He’d [Rishi] have had a team predict what would be asked and prepped him on answers. But that’s v different from being given questions in advance.”[sic]

Yesterday evening Martin took the opportunity to question the Chancellor on a number of his Budget decisions, when he appeared on a live version of his ITV show, The Martin Lewis Money Show.

While Martin commended many of the Chancellor’s efforts, he was critical of his Universal Credit choices.

He also took the opportunity to grill the Chancellor about SEISS eligibility, as well as addressing problems with the furlough scheme.

Ahead of his live interview, Martin hit back at a follower who urged him to “have a break”, after he mistakenly tweeted the incorrect end date of the stamp duty holiday.

After being told his work could wait until “morning”, Martin replied: “Actually it won’t I’m interviewing the Chancellor in the morning. to be played on the show in the evening, and in truth I think I owe it to all those who supported me on here getting the interview, to be as well briefed as possible.”[sic]

The well-intentioned tweet was in response to Martin apologising to his followers for his stamp duty mistake.

“I’m doing this at great speed, while taking notes, and listening! I need another hand, and two more brains.”