Home » Celebrities » Meghan Markle and Prince Harry introduce Lili to the Queen: Her great grandchildren mean the world to her

Meghan Markle and Prince Harry introduce Lili to the Queen: Her great grandchildren mean the world to her

The Queen appeared to enjoy the first day of her Platinum Jubilee celebrations, but there is one noticeable event that will no doubt take precedence for the 96-year-old; meeting Lilibet Diana for the first time.

With Meghan and Harry in the UK for the Jubilee festivities, the Duke and the Duchess of Sussex will certainly relish their chance to spend some proper time with the Queen and introduce her for the first time to their youngest, Lili.

Whilst details of the highly-private event remain unknown, one thing we can be sure of is that for Her Majesty, meeting her namesake great-granddaughter will be a high priority.

MORE: Meghan Markle pictured with royal family for the first time since leaving the UK as a senior royal

Speaking about the happy first meeting, HELLO!’s Royal Editor, Emily Nash said: “this will be a highlight of the jubilee celebrations for the Queen – her great-grandchildren mean the world to her and like any great grandmother who hasn’t been able to meet the youngest member of the family yet, the moment when it finally happens will be full of joy.”

The 96-year-old enjoys spending time with her great-grandchildren

She added: “Seeing her with her great-grandchildren on the balcony was a great insight into how warm their relationship is.”

Being with her great-grandchildren is clearly a delight as we saw on Thursday when the Queen joyously interacted with the Cambridge children as they enjoyed the RAF flypast.

Having so far maintained a low profile, Harry and Meghan will likely introduce the pair in a private setting, away from the media. At Thursday’s Trooping the Colour, the duo stayed out of the limelight as they enjoyed the military spectacle from inside the Major General’s Office. 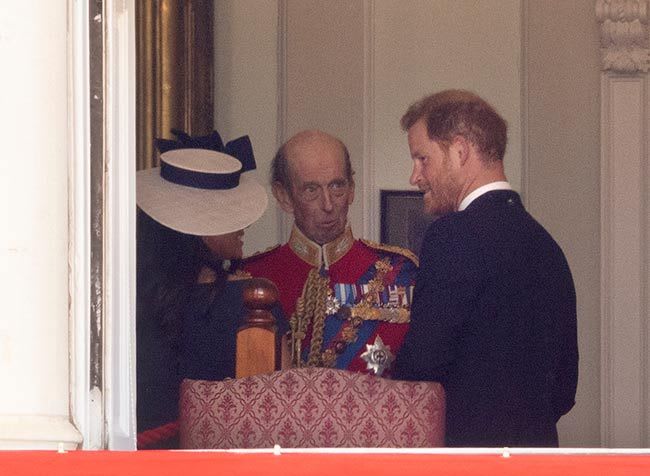 Harry and Meghan kept a low profile during Trooping the Colour

At one point, Prince Harry and Meghan were seen playfully telling some royal children including Isla Phillips and Lena Tindall to be quiet as they enjoyed the parade.

It is believed that the family of four will stay at Frogmore Cottage, Harry and Meghan’s UK residence. The home was where the couple spent their final period as working royals before moving to north America, and it was recently reported that they extended the lease on a 12-month rolling arrangement.

Their trip will be extra special this year in light of Lilibet’s first birthday which takes place on Saturday.