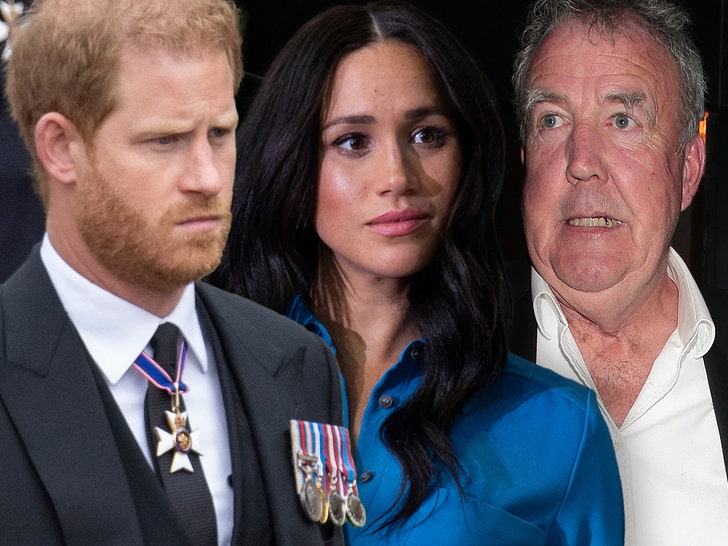 Meghan Markle and Prince Harry calling BS over a British newspaper’s attempt to make peace after one of their writers penned a scathing takedown of the Duchess … one that got so much backlash, they actually had to yank the thing entirely.

We’re talking about Jeremy Clarkson‘s column in The Sun from a couple weeks ago, in which he suggested MM was deserving of a public flogging of sorts … saying he dreamed of her being stripped down and shamed in the most graphic of terms.

The paragraph that drew the most outrage read, “Meghan, though, is a different story. I hate her. Not like I hate Nicola Sturgeon or Rose West. I hate her on a cellular level. At night, I’m unable to sleep as I lie there, grinding my teeth and dreaming of the day when she is made to parade naked through the streets of every town in Britain while the crowds chant, ‘Shame!’ and throw lumps of excrement at her.”

He was referring to an infamous scene in ‘Game of Thrones,’ when Cersei is put through this exact type of treatment, in dramatic fashion.

Of course, his words drew the ire of many on social media … with a ton of folks calling his words misogynistic, racist and downright evil — just the sheer amount of vitriol he expressed for Meghan in the wake of her and Harry’s Netflix special was, frankly, beyond the pale.

There were reportedly scores of complaints filed over the column, and eventually … The Sun got the message and apologized. They said, in part, “Columnists’ opinions are their own, but as a publisher, we realise that with free expression comes responsibility.”

The Sun added, “We at The Sun regret the publication of this article and we are sincerely sorry.” They deleted the piece from their website and their archives as well. Clarkson even apologized, saying he’d made a “clumsy” misstep in trying to reference ‘GOT.’

Welp, the Sussexes weren’t having … calling The Sun’s word empty and meaningless — especially since they, apparently, have not reached out to the one person that matters.

A rep for Meghan and Harry says, “The fact that The Sun has not contacted The Duchess of Sussex to apologize shows their intent. This is nothing more than a PR stunt.”

They went on to say, “While the public absolutely deserves the publication’s regrets for their dangerous comments, we wouldn’t be in this situation if The Sun did not continue to profit off of and exploit hate, violence and misogyny. A true apology would be a shift in their coverage and ethical standards for all. Unfortunately, we’re not holding our breath.”