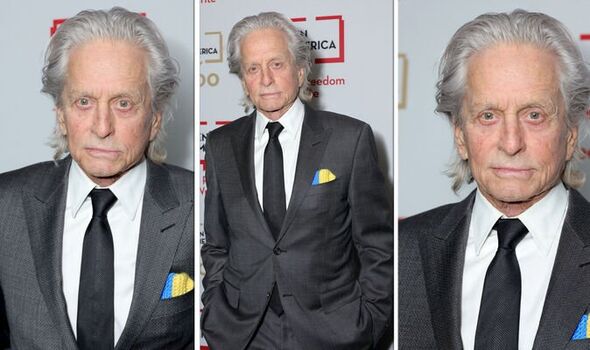 The gala promotes literature and human rights, protecting open expression in the US and worldwide.

Michael’s wife Catherine Zeta-Jones was not in attendance this year, but they have previously attended the event together.

Michael was there to present an award.

He made a statmement on the red carpet in support of Ukraine and wore a blue and yellow pocket square.

He also wore a grey suit, with matching tie.

Michael douglas wore blue and yellow in solidarity with Ukraine on the red carpet.

The Hollywood star was pictured on the red carpet

Catherine has attended the event in the past.

The veteran actor was at the gala to present an award

He wore a grey suit, with matching tie and a pocket square in the colours of the Ukraine flag.

The lovebirds smile on the red carpet.

The couple were pictured at the 2018 PEN gala

Catherine Zeta-Jones and Michael Douglas take a selfie together at the PEN Literary Gala at the American Museum of Natural History on May 22, 2018.