Sprinter Sha’Carri Richardson is owning her mistakes after testing positive for marijuana, potentially putting her dreams of going to the Tokyo Olympic Games in jeopardy.

The news of her positive results comes after the U.S. Olympic track and field trials in Oregon, where recreational marijuana use is legal, just one month prior, per People. However, using the substance goes against the sport’s policy. Despite winning the women’s 100m the same day of her failed test, she was suspended from the sport for one month, beginning on June 28. Meanwhile, the Olympic Games are set to get underway on July 23.

Seemingly addressing her suspension, Richardson took to Twitter on July 1, writing, “I am human.” She later opened up about the ordeal in detail while speaking with Savannah Guthrie on the July 2 episode of the “Today” show.

“I know what I did. I know what I’m supposed to do and what I’m allowed not to do, and I still made that decision,” she admitted. “But I’m not making an excuse or looking for any empathy in my case.” Keep scrolling to see what else she said.

Sha'Carri Richardson said she struggled to deal with the 'pressure' 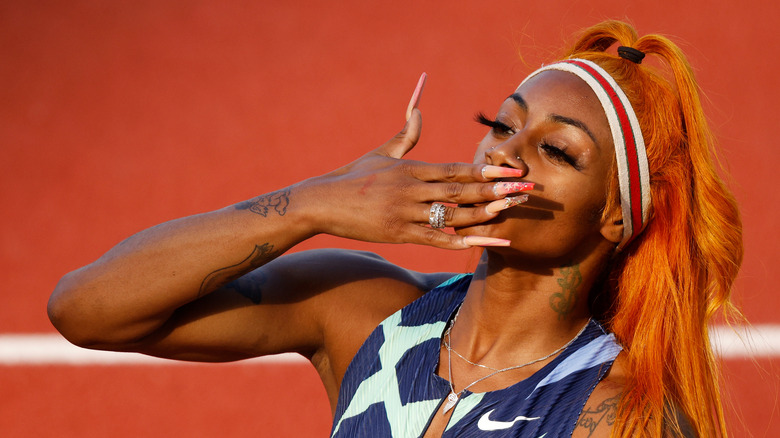 While apologizing for her actions on the Today show, Olympic runner Sha’Carri Richardson tried to explain how she was feeling when she put her Olympic fate in danger. At the time, the sprinter had just learned her biological mother had died, which she said was a “very heavy topic” for her.

“We all have our different struggles. We all have our different things we deal with,” Richardson shared. “But to put on a face, to have to go in front of the world and put on a face and hide my pain, I don’t know … Who am I to tell you how to cope when you’re dealing with pain? Or you’re dealing with a struggle that you’ve never experienced before? Or that you never thought you’d have to deal with?”

Attempting to explain the “pressure” of being on the world’s stage, plus dealing with her “state of emotional panic” following the new her biological mother’s death, she said she was “blinded by emotions,” stating, “I was trying to hide my pain.”

“I would like to say to my friends, my family, my sponsorship, to the haters too: I apologize,” she said on the show. “I’m human. We’re human. … Don’t judge me, because I am human. I’m you, I just happen to run a little faster.”

Despite this setback, she still has high hopes for her Olympic career, and promised, “This will never happen again.”