Photos of the Royal Family celebrating Christmas through the years

It’s the most wonderful time of the year, with the most magical photos to boot! As we gear up for the holiday season, we’re reminiscing about royal family Christmases over the years.

MORE: Inside the royal family’s poignant first Christmas without the Queen

From 1944 onwards, the holiday season has always made for some incredible Kodak moments – including the late Queen‘s first-ever televised Christmas address and performance of Aladdin with little sister Princess Margaret and Meghan Markle’s first visit to Sandringham.

Princesses Margaret and Elizabeth, both in costume, smiled for the camera during a royal pantomime production of Aladdin at Windsor Castle on December 15. 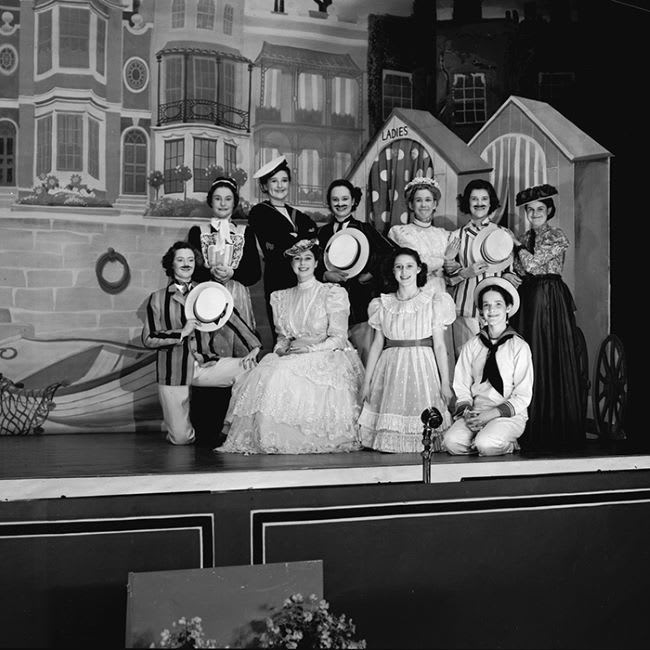 On December. 23, a young Princess Elizabeth and Princess Margaret posed during a beach scene with actors and actresses in Old Mother Red Riding Boots, a pantomime that played at Windsor Castle. 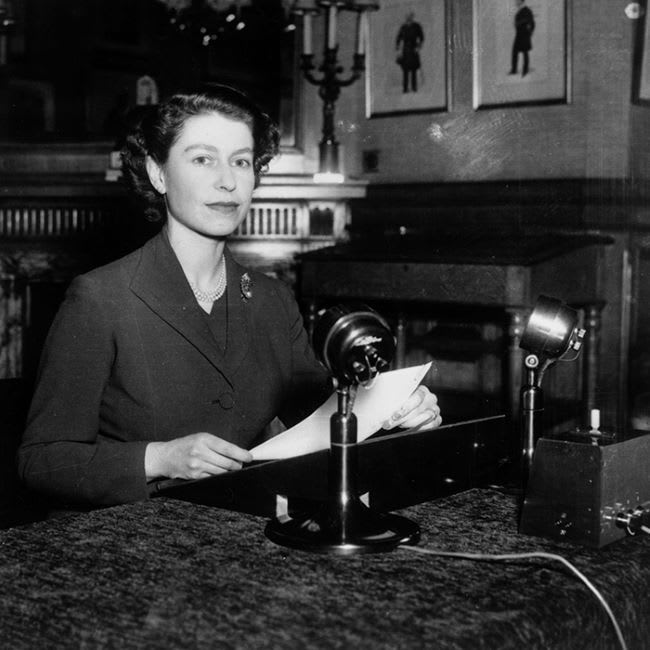 Making history, Queen Elizabeth II made her first-ever Christmas broadcast to the nation from Sandringham House. 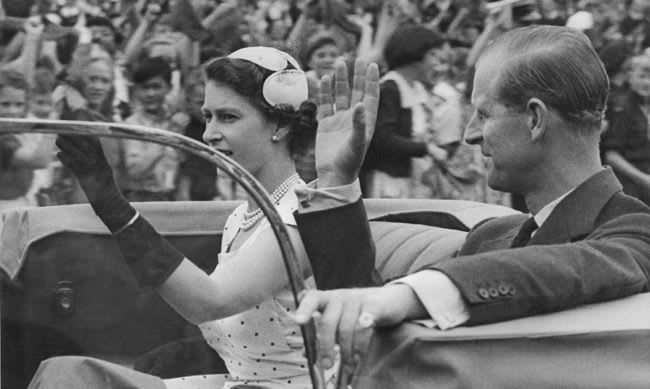 Her Majesty and Prince Philip arrived at Government House after attending a youth rally in Auckland, New Zealand, during their coronation world tour. The late Queen delivered her Christmas message from Down Under. 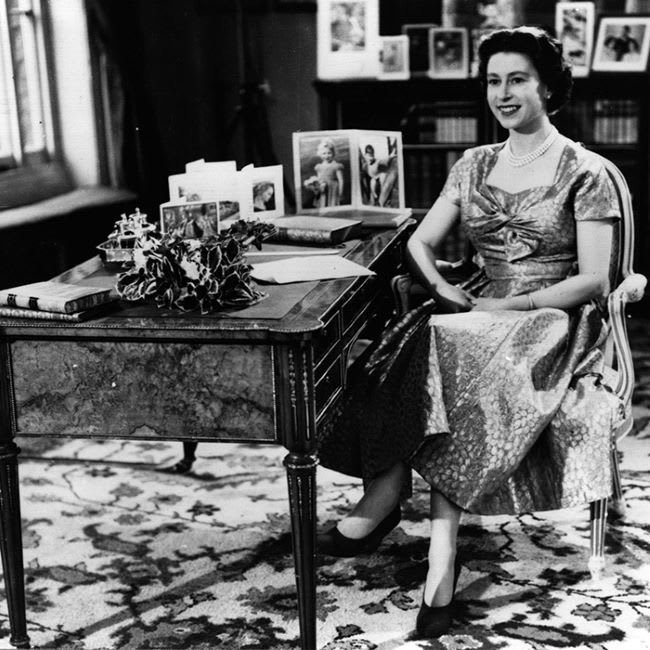 Queen Elizabeth II showed off her megawatt smile just before the end of her first televised Christmas Day speech to the nation. 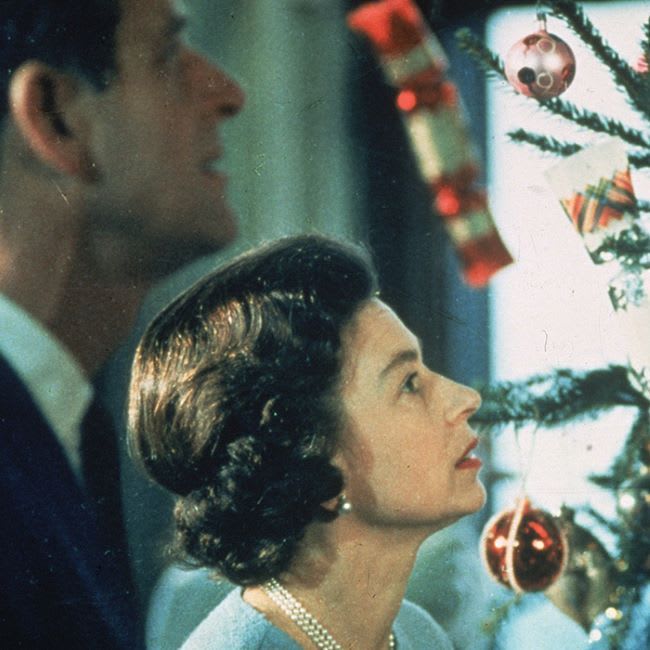 Queen Elizabeth II and Prince Philip took a look at their decorated Christmas tree during the filming of a television special exploring their life in the British royal family. 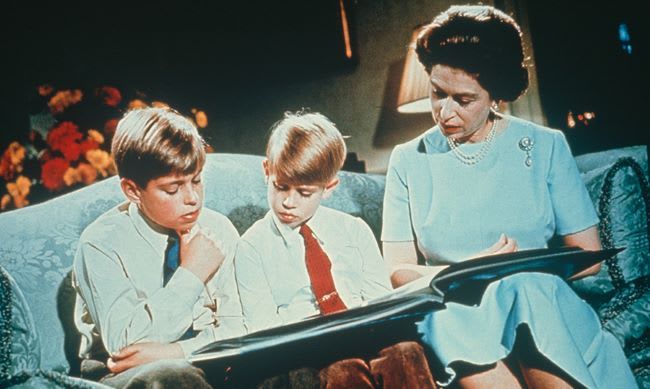 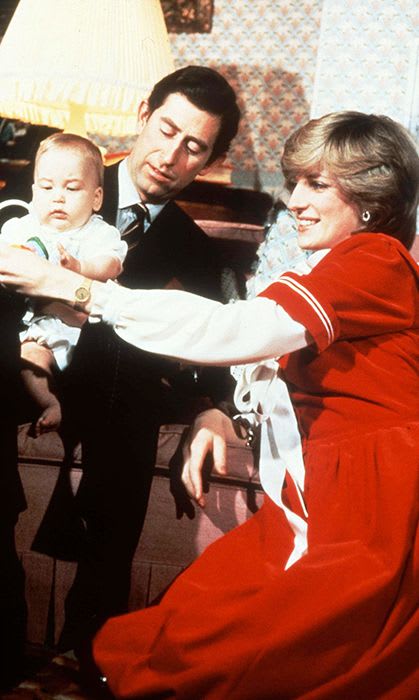 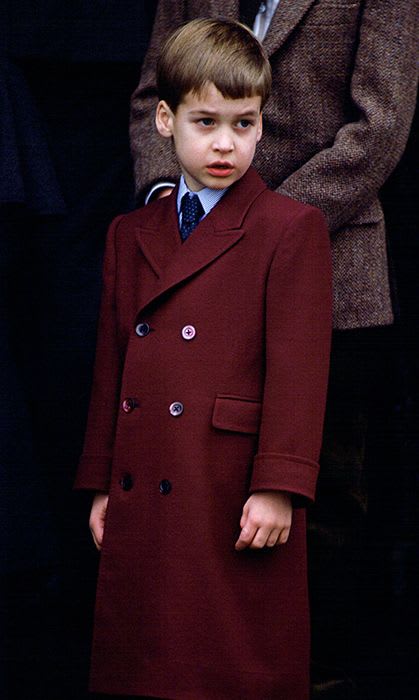 Six-year-old Prince William enjoyed Christmas Day at Sandringham with his extended family. The young royal looked so smart in a maroon coat, blue shirt and tie. 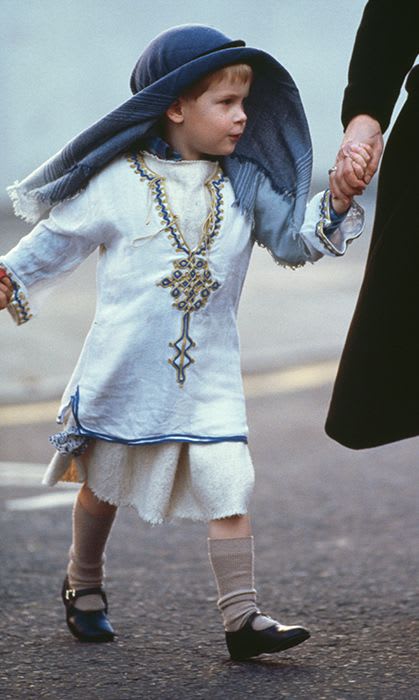 Prince Harry, then four, dressed as a shepherd for his school’s Christmas play and he looked so sweet! 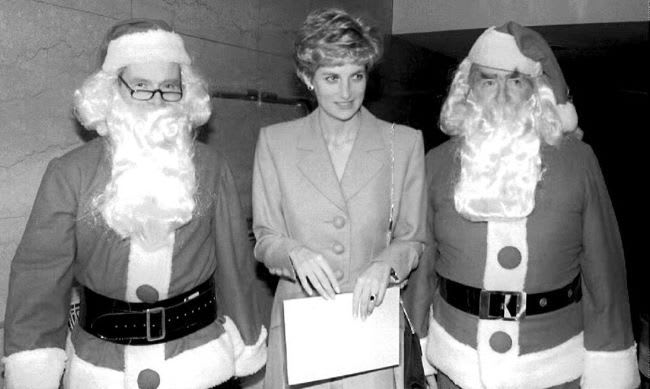 Princess Diana  – as patron of Headway, the National Head Injuries Association – attended a lunch hosted by the American Chamber of Commerce. She posed between British author and politician Lord Jeffrey Archer and former Chancellor of the Exchequer, Lord Denis Healey, both dressed as Santa Claus. 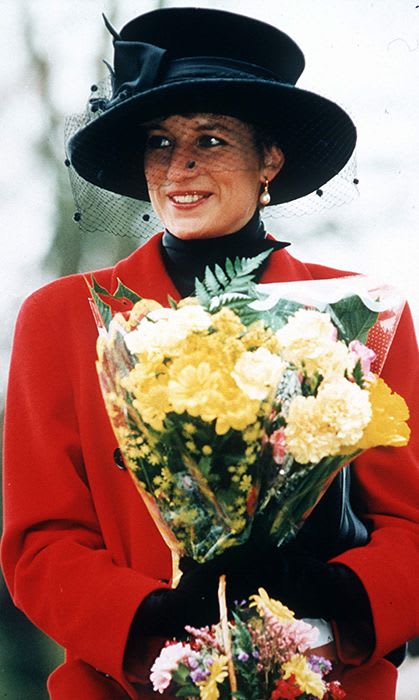 Princess Diana looked striking in a bright red coat and black netted hat while at Sandringham for the Christmas Day service. 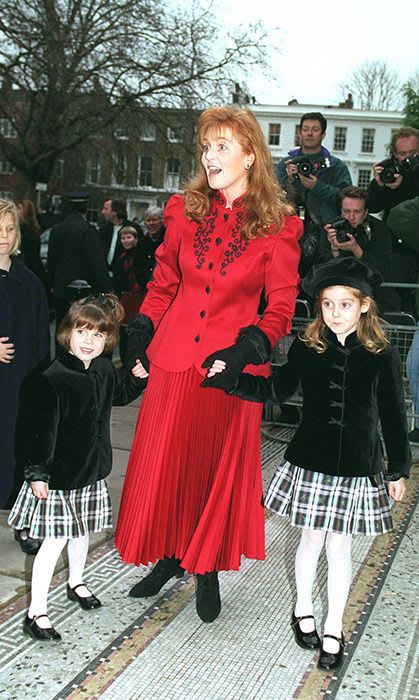 Too cute! The Duchess of York dazzled in red as she held the hands of her daughters, Princesses Beatrice, seven, and Eugenie, five. The three were enjoying a mother-daughter date attending a pantomime of Cinderella in aid of Children in Crisis, of which Sarah is a patron. 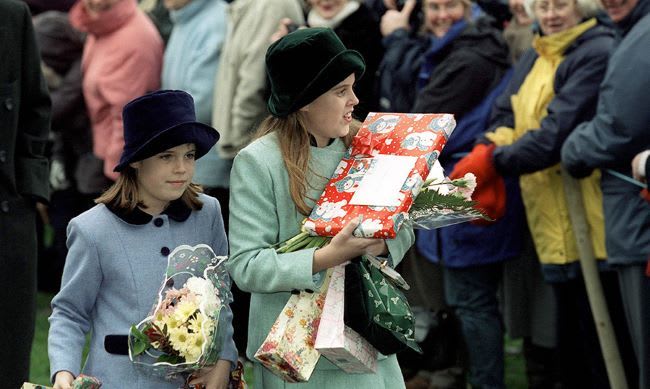 At Sandringham for Christmas, the royal sisters looked sweet as ever in matching outfits, Eugenie in purple and Beatrice in green. The two held armfuls of presents given to them by admirers. 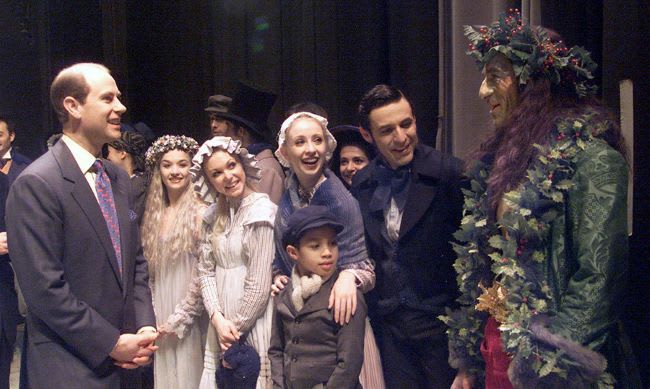 Prince Edward met backstage with dancers in a Northern Ballet adaptation of A Christmas Carol in Surrey. 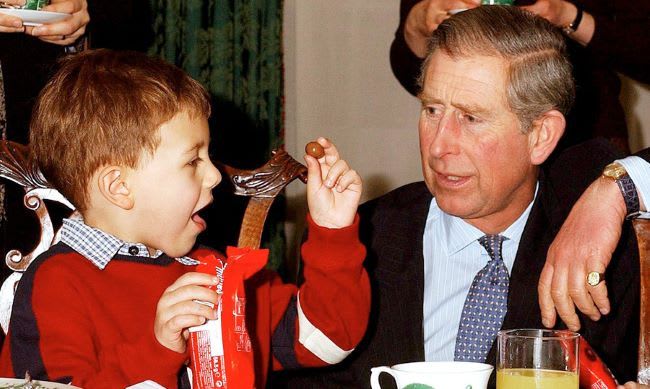 Showing off his big heart, King Charles chatted with Thomas Willis, a four-year-old battling Leukemia, after helping to decorate the Christmas tree at Clarence House. 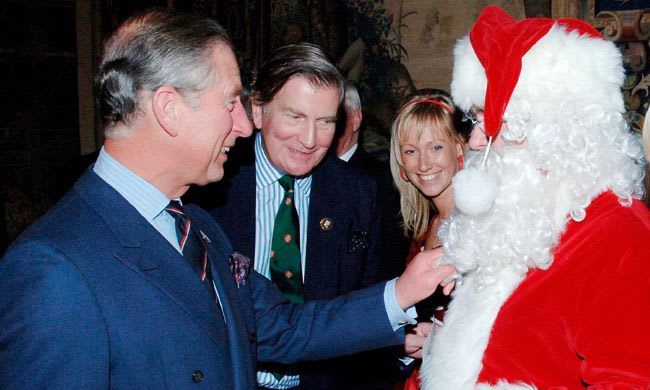 The then-Prince of Wales scored a meeting with Father Christmas … and gave a tug on his beard for good luck! The father-of-two was at the Not Forgotten Association reception at St James’ Palace. The Association acts on behalf of disabled and wounded service and ex-service personnel.

Prince Harry donned a Christmas hat as he stood outside the VHR (very high readiness) tent at Camp Bastion in Afghanistan’s Helmand province. The dad-of-two said he was “thrilled to be back” in Britain as he returned home after serving a 20-week tour of duty. At the time, Harry was an Apache attack helicopter co-pilot

The then-Duchess of Cambridge lent a hand wrapping holiday presents during a visit to the Northside Centre for Child Development in New York City. She and Prince William were on an official three-day visit to New York and later met then-US President Barack Obama in Washington D.C.

Prince William was deep in concentration while decorating a gingerbread house during a visit to a Christmas party for volunteers at The Mix youth service in London. The charitable organization works with the Heads Together campaign. 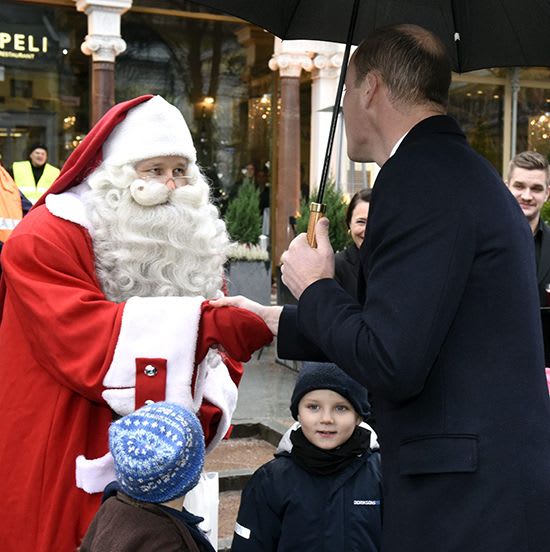 Prince George handwrote a letter to Santa and it was adorable! His dad Prince William was able to deliver the letter to Father Christmas in person, and what did the little prince ask for? A police car!

George, then four, also circled that he had been “nice” that year in a line that read: “Dear Father Christmas, this year I have been naughty/nice”. Prince William was on an official visit to Finland when he bumped into Santa and grabbed the opportunity to hand him the letter. 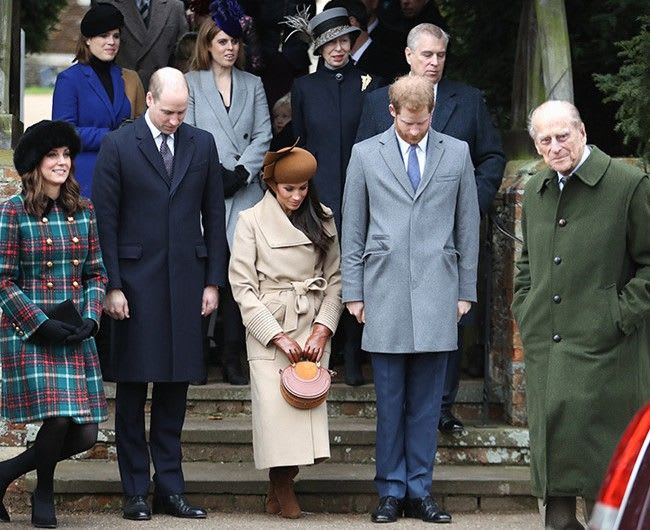 This year marked Meghan Markle’s first Christmas with the Royal Family. She attended the Christmas Day services at Sandringham along with Princess Beatrice, Princess Eugenie, Princess Anne, Prince Andrew, Prince William, Prince Philip, Princess Kate, and Prince Harry. Fans were delighted to see her curtsy to the Queen for the very first time! 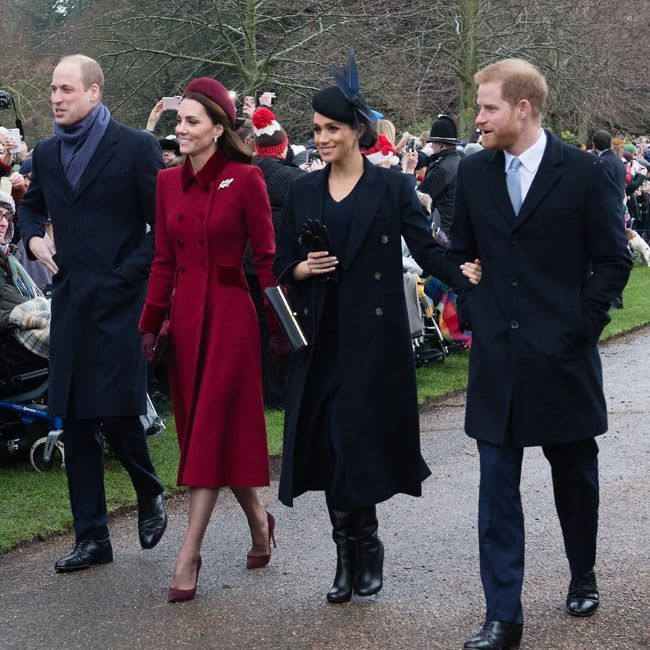 A pregnant Meghan walked to church at Sandringham arm-in-arm with Harry. The couple were joined by Kate and William in the family’s final pre-pandemic Christmas outing.