Piers Morgan, 54, got involved in a war of words with James Purefoy, 55, amid the Good Morning Britain presenter’s Brexit row with Hugh Grant, 58. The TV personality caught the Rome actor’s attention when he brought the latter’s “morality” into question. Piers’ comments come after the Love Actually star criticised Prime Minister Boris Johnson’s decision to suspend Parliament in September, on the micro-blogging site this week. Hugh slated the Prime Minister’s latest move in view of his 408,000 Twitter followers, saying: “You will not f**k with my children’s future.

I have played myself in 9 movies that have grossed over $2 billion – how’s your film career doing?

“You will not destroy the freedoms my grandfather fought two world wars to defend.

“F**k off you over-promoted rubber bath toy,” he added.

“Britain is revolted by you and you(sic) little gang of masturbatory prefects.”

As part of his response to Hugh’s outraged tweet, the outspoken journalist posted the actor’s mug shot in view of his 6.8 million Twitter followers and sarcastically wrote: “Halo Hugh… Britain’s moral standard-bearer.”

James took issue with Piers’ suggestion about Hugh yesterday as he accused the presenter of hypocritically “playing the morality card”.

He hit back: “You? Playing the morality card? 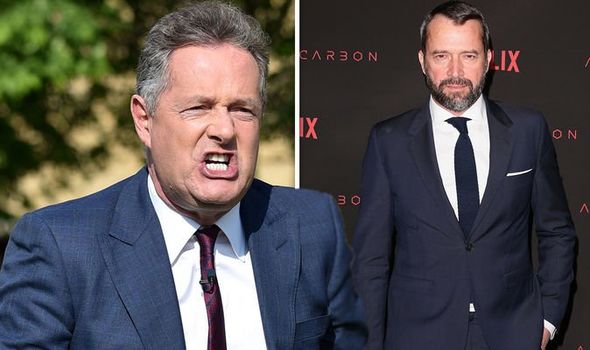 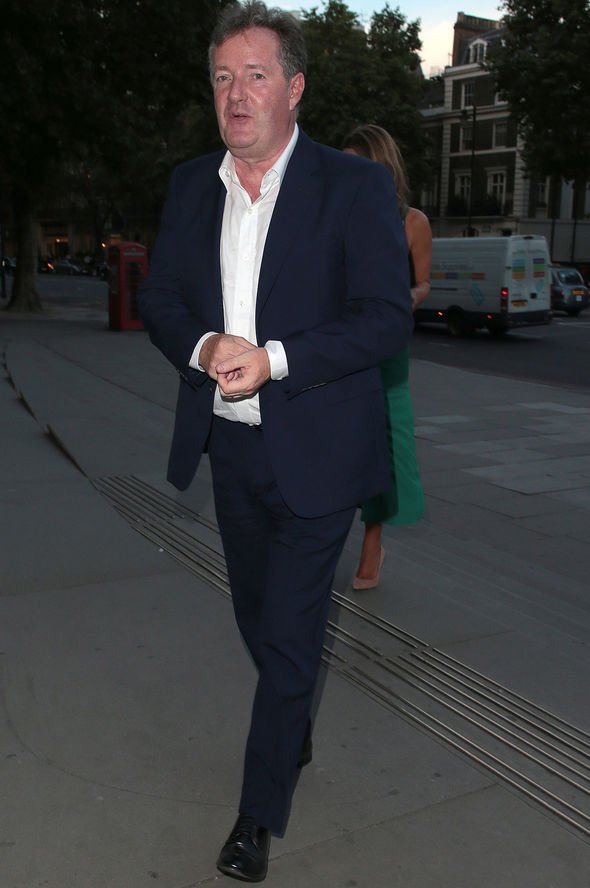 “Seriously? The stench of hypocrisy is overwhelming.”

Piers was less than impressed with the actor’s response and took the opportunity to issue a low blow about his “film career” in retaliation.

He fiendishly wrote back: “Hi James… I was mocking Mr Grant playing the morality card, not playing it myself.

“That, as you rightly point out, would be absurd.

“However, I have played myself in 9 movies that have grossed over $2 billion – how’s your film career doing?” 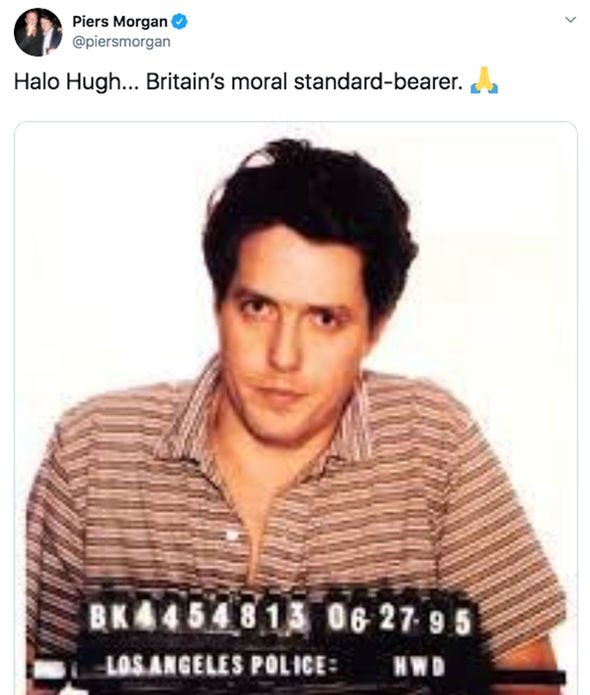 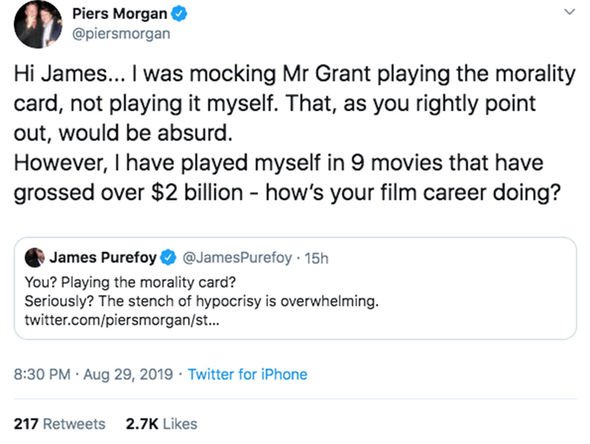 One person replied: “Your responses to celeb tweets today have been absolutely priceless. Certainly brightened up my day and a refreshing change to all the ridiculous celeb lefty tweets of tantrum.”

Another agreed: “There’s a stench of self righteousness with Mr Purefoy.”

However, others dismissed the spat between the stars, with one Twitter user replying: “It’d be so nice if adults didn’t indulge in such childish behaviour.”

In light of the debates, Boris Johnson recently said it was “completely untrue” he was planning to deny time to MPs to debate Britain’s exit from the EU.