The Duke of Sussex‘s searingly-honest memoir, Spare, recently became the fastest-selling non-fiction book ever as his tell-all tale about the royal family was finally published.

His autobiography, which hit the shelves on Tuesday, gave royal watchers a very intimate insight into all his personal on-goings including introducing his future wife Meghan Markle to the royal family.

Although Meghan’s first meeting with the late monarch was “pleasant”, Prince Harry confessed his frustration at some of the circumstances.

“There was some bloke standing to the other side of Granny and I thought: Bogey at twelve o’clock,” he wrote, referring to a friend of Sarah Ferguson. “Meg looked to me for a clue as to his identity, but I couldn’t help – I’d never seen him before.

“[Princess Eugenie] whispered into my ear that he was a friend of her mum’s. Ah, OK. I looked at him hard, ‘Brilliant. Congratulations on being present for one of the most consequential moments of my life.'” 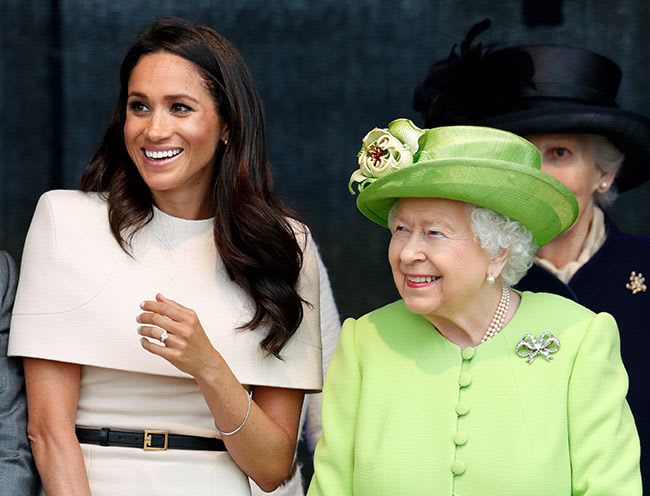 After marrying Harry, Meghan enjoyed a solo outing with the Queen back in June 2018

The special moment was staged at Royal Lodge, the Duke of York’s Berkshire home, back in October 2016, a year before the couple got engaged.

Touching upon Meghan’s casual attire, he added: “Granny was dressed for church: a brightly colored dress and matching hat. I can’t recall the colour, I wish I could, but it was bright. Fancy. I could see Meg regretting her jeans and black sweater.

“I was also regretting my shabby trousers. We didn’t plan, I wanted to tell Granny, but she was busy asking about Meg’s visit.”

The Duke also revealed how his then-girlfriend was quizzed by the Queen about her opinion of Donald Trump the first time the two women met, but, “Meg thought politics a no-win game, so she changed the subject to Canada”.

He then told how the former Suits star did not recognise the Duke of York, who was holding the Queen’s handbag when he joined them, and thought he was the monarch’s assistant.