Today, the Prince and Princess of Wales met with volunteers and operational staff who helped make the queen’s committal service at St. George’s Chapel in Windsor Castle possible. William and Kate also greeted supporters who gathered to pay their respects to the queen in Windsor.

For the outing, Kate wore a collarless, double-breasted long coat with gold buttons from Dolce & Gabbana. She paired the dress with a black iteration of her signature suede pumps from Gianvito Rossi, as well as pearl-and-diamond earrings from Annoushka.

Meanwhile, William wore a navy suit with a white dress shirt and a black tie. 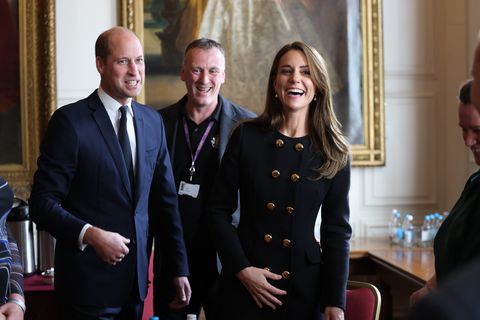 Since Queen Elizabeth’s death on September 8, members of the royal family have been busy participating in processions and vigils, greeting mourners, and welcoming global leaders and dignitaries ahead of Her Majesty’s funeral, which occurred on Monday.

William had previously paid tribute to the queen in a statement released by Kensington Palace soon after the announcement of her death.

“She was by my side at my happiest moments,” the Prince of Wales said in the message. “And she was by my side during the saddest days of my life. I knew this day would come, but it will be some time before the reality of life without Grannie will truly feel real.”

While speaking with well-wishers outside Windsor Castle earlier this month, Kate told one supporter how the family is coping with their loss.

“My little Louis is just so sweet,” Kate says in a video that captured the interaction, eventually becoming teary-eyed. She references her youngest son, four-year-old Prince Louis, saying, “He said, ‘Mummy, don’t worry, because she is now with Great-Grandpa.'”