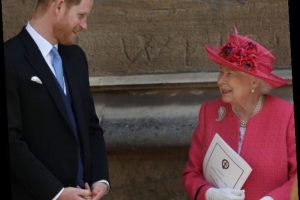 As we enter a new year, many are voicing hopes that 2021 will be the year in which members of the royal family will be able to set aside the differences that have been tearing them apart for so long.

But so far it looks like the pleas for peace have fallen on deaf ears.

In fact, it seems that some long-simmering hostilities might finally come to a boil in the months to come.

The latest signs of tension stem from events that took place on Remembrance Day, which is observed in the UK on November 11.

A day to honor UK troops who lost their lives in combat, Remembrance Day has always been of special significance to Prince Harry, himself a former soldier.

Earlier this week, royal experts and radio hosts Charlie Rae and Kevin O’Sullivan revealed that the occasion unexpectedly became a source of great tension between Harry and the Queen.

It seems that Harry had intended to participate in the annual laying of wreaths at the graves of departed troops, but he was rebuffed by the Queen, who barred him from taking part in the ceremony.

Rather than let the day pass without any observation at all, Harry and Meghan made a trip to an American ceremony, where they honored those who had fallen in combat.

The event was not approved by the Queen, and she was reportedly embarrassed by the public display.

“That ceremony on Remembrance day where Prince Harry wanted a wreath to be laid on his behalf for all of the fallen military heroes — the Queen took two seconds to say no, you left the Royal Family, you are not involved in this,” O’Sullivan said.

“At which point, Meghan Markle and Prince Harry, rather petulantly I would have thought, staged their own ceremony by going to a LA military cemetery,” he continued.

“A cemetery where all the American soldiers were buried to lay their own wreath.”

O’Sullivan went on to accuse the Sussexes of staging a photo-op, knowing that doing so would irritate the Queen.

“They were also taking the precaution of taking a photographer along with them to turn it into a cheap and nasty publicity stunt,” he said.

“I just think this is becoming a clear and present daily embarrassment for the Royal Family, don’t you think.”

“It is an embarrassment to the Royal Family, there is no doubt about that,” Rae agreed.

“It is going to be an even busier few months coming up because we are expecting Prince Harry to come back because March is the year-long deal that they have got at the moment,” he continued.

“That will turn out to be extending and Prince Harry is expected to be around for the Queen’s 95th birthday and Prince Philips 100th birthday.”

Yes, whether they like it or not, the Sussexes and the rest of the Royals will be spending a great deal of time together in the months to come.

The “Megxit” deal that was agreed upon before Harry and Meghan departed for America is soon to come up for review.

Sources say Harry is hoping to retain his military titles, but the other Windsors — who are reportedly irate over some of Harry and Meghan’s business deals — may vote against allowing him to do so.

If that happens, relations between the two sides are sure to deteriorate even further.

And the hope for any sort of peace between them might be lost forever.