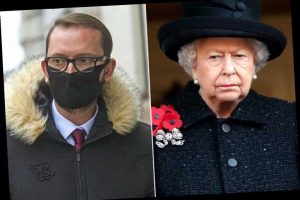 After Adamo Canto, 37, pleaded guilty to three counts of theft between November 2019 and August 2020 in November, he was sentenced on Monday to serve eight months in jail, according to the BBC.

The former palace staffer from Scarborough, North Yorkshire, stole a "significant quantity" of items, which police found at his quarters at the palace's Royal Mews.

Among the stolen items were signed official photographs of Prince Harry, Prince William and Kate Middleton.

Canto also took a Companion of Bath medal belonging to the Master of the Household, Vice Admiral Master Tony Johnstone-Burt. Johnstone-Burt said in a statement that he realized the medal was gone when he went to wear it for Trooping the Colour. Canto also stole a Commander of the Royal Victorian Order medal from the locker of former British Army officer Maj Gen Richard Sykes, which was given to him by the Queen in 2010. The court learned that 77 items were taken from the palace shop, while pieces were also stolen from staff lockers, the Queen's Gallery shop and Prince Andrew's storeroom. Canto took advantage of the coronavirus pandemic this year when he gained more access to offices and other areas that he usually did not frequent. Queen Elizabeth, 94, has not been back at her London residence since March. Instead, she's been spending time with husband Prince Philip, 99, at Windsor Castle, Sandringham estate and Balmoral Castle in Scotland.