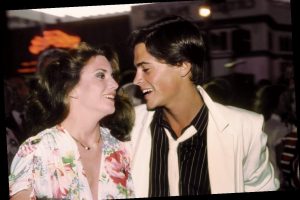 Little House on the Prairie star Melissa Gilbert and Brat Packer Rob Lowe started dating when they were 17 years old. They fell hard and fast. Lowe had many pet names for Gilbert. But one of them was more unique than the rest.

Lowe and Gilbert started dating after making eye contact while driving down La Cienega Boulevard in Los Angeles. They’d met three years prior when the actors were 14, but Lowe never called Gilbert after their first run-in to get together. But as soon as the teenagers went on their first date, they were inseparable.

“I never wanted to be away from his side,” wrote Gilbert in her memoir, Prairie Tale. “We went from first date to instant couple—just add water. Almost overnight everything was suddenly all Rob or all Rob and Melissa.”

Gilbert says she “felt like I was starving for Rob. I wanted to bite him.” And Lowe felt the same way.

“He wrote me poetry. He left notes. He cooed the sweetest messages into my answering machine,” wrote Gilbert.

One of the more unique nicknames Lowe gave Gilbert was “Franchise.”

“I earned this one because I came with a complete package of people, everything a star needed: the manager, the business manager, the publicist, the mother, the manicurist, and the hairstylist,” explained Gilbert, adding that her entourage “could be intrusive.”

But that’s just the way it was. Gilbert’s team was “an extension of [her].”

“The deal was simple: love me, love my team,” wrote Gilbert.

Melissa Gilbert’s mother was ‘at the helm’ of her career

The person who was most involved in Gilbert’s career was none other than her mother.

“My mother was at the helm of everything, including my career, my food intake, and how I dressed–my whole life,” wrote Gilbert.

In her “franchise,” Gilbert’s mother was her “team captain and coach.”

“The two of us had our difficult moments, disagreements, and communication problems, but we were impossibly close,” wrote Gilbert. “A clinician would have called us codependent. Someone else would have defined our relationship as unconditional love.”

While Lowe had never seen anything like Gilbert’s “franchise” before, he understood. Gilbert’s team, along with her mother, were all a part of the package.