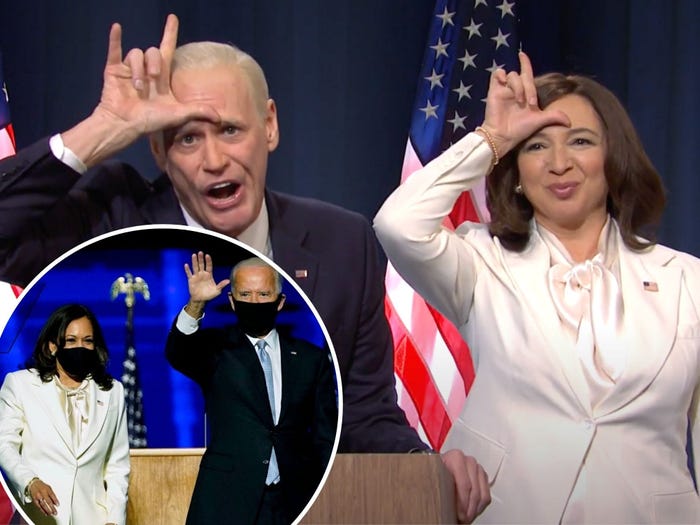 The episode, hosted by comedian Dave Chappelle, began with a cold-open segment from Jim Carrey as Biden and Maya Rudolph as Harris.

Carrey as Biden said that while the election results "took forever" to be announced, he's "never felt so alive."

"Which is ironic since I'm not that alive," he said.

"I pledge to be a president who seeks not to divide, but unify — who doesn't see red states and blue states, only sees the United States," Biden said on Saturday night.

In the "SNL" skit, Carrey said he would "be a president for all Americans."

Rudolph opened her speech on "SNL" by highlighting Harris as the first female, Black, and Asian American vice president-elect. Rudolph also mentioned that Harris' husband, Doug Emhoff, will be the first second gentleman — and the first Jewish one at that.

"Between us, we check more boxes than a disqualified ballot," Rudolph said.

Rudolph also acknowledged the groundbreaking moment that Harris' victory represents for women and girls of color.

Baldwin then played a piano version of Village People's song "Macho Man," which was a nod to Trump's use of the band's music at his events. In June, Village People singer and co-founder Victor Willis told Trump to stop playing the band's songs at his campaign rallies. The show has previously parodied the band telling the president to cease usage of their song "YMCA."

"This isn't goodbye, America," said Baldwin as Trump. "See you in court!"

While "SNL" portrayed the president's concession speech in its fictional scene, it's unlikely that Trump will formally concede defeat to Biden, sources close to the president told media outlets on Saturday.