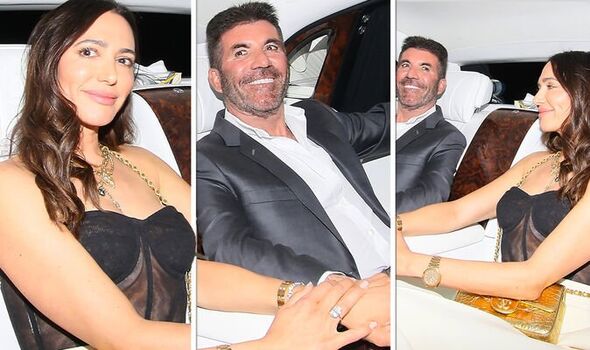 Simon Cowell and his fiancée Lauren Silverman put on a loved-up display yesterday following the third night of the Britain’s Got Talent semi-finals. It comes as the couple prepare to walk down the aisle later this year.

The talent boss, 62, and his socialite fiancee, 44, looked more loved-up than ever as they relaxed in the back of a waiting car which featured smart, white leather seats.

Lauren grinned as she clasped the hand of her fiance while showing off her blinding, diamond engagement ring.

She donned a strapless black corset top with a sheer panel underneath her breasts, which she paired with a beige number on her lower half.

The star added a touch of glamour to her outfit with a metallic gold handbag, gold watch and of course, her statement engagement ring.

Simon cut his usual smart figure in a tailored black suit which he paired with a smart white shirt.

The couple, who have been together for almost a a decade, confirmed the happy news of their engagement in January.

Lauren SIlverman clasped Simon’s hand as they made their exit

Lauren Silverman grinned as she showcased her stunning engagement ring

Simon Cowell appeared to be in good spirits

Simon Cowell smiled as they left the studio

The couple have been together for almost a decade

Lauren Silverman and Simon Cowell have been together since 2013

In January, Simon and Lauren confirmed the news of their engagement

Simon Cowell and Lauren reportedly hope to marry in June