The Best Electric Cars of 2020

The Porsche Taycan Turbo S is a great antidote for social distancing. During a summertime Saturday drive just north of Los Angeles, pedestrians wave, motorcyclists flash thumbs-ups, and a surfer pulling on his wetsuit simply points and stares. It’s the most socializing I’ve done in months.

The Taycan is Porsche’s first-ever all-electric vehicle, and the Turbo S is the most powerful version of the Taycan, so it makes sense that the car commands so much attention. The four-door sedan boasts unmistakable Porsche design elements even people who don’t care about cars can recognize: bulging fenders, a swooping roofline, all-around beauty. (It’s also got an unmistakable Porsche price: $185,000.) But the roads in and around L.A. are teeming with luxury automobiles. What’s so notable about the Turbo S?

The answer is the sound — or lack of it. When people see, say, a Tesla Model S — the Taycan’s main competitor — they aren’t surprised by the absence of engine noise; that’s what you expect from a Tesla. But a silent Porsche? That doesn’t seem right.

It does, however, feel right. Mashing the “gas” pedal to launch onto the 405 freeway, the acceleration shellacs me to my seat as two electric motors, one in front and one in back, deliver 774 pound-feet of torque to all four wheels. Porsche quotes a zero-to-60 mph time of 2.6 seconds, but it’s likely even quicker than that. Plus, the Turbo S has something other EVs don’t — a second gear, which helps maintain acceleration up to the car’s 161-mph top speed.

With an EPA-rated range of just 192 miles, the Turbo S might not be ideal for road trips. But it offers a surprisingly comfortable ride while still handling like a Porsche. It carved up canyon roads in Malibu with Teutonic precision, despite weighing in at a whopping 5,121 pounds.

And truth be told, it doesn’t do it in actual silence. The Turbo S features a standard “Electric Sport Sound” system that broadcasts acceleration noise inside and outside the cabin, like a techno remix of a high-revving gas engine. “It sounds like being in a spaceship,” a passenger in my car said. Considering the Turbo S is a feat of engineering that moves far quicker than humans have any business moving, that’s a pretty apt description. —Ky Henderson

For Everyone: 2020 Nissan Leaf 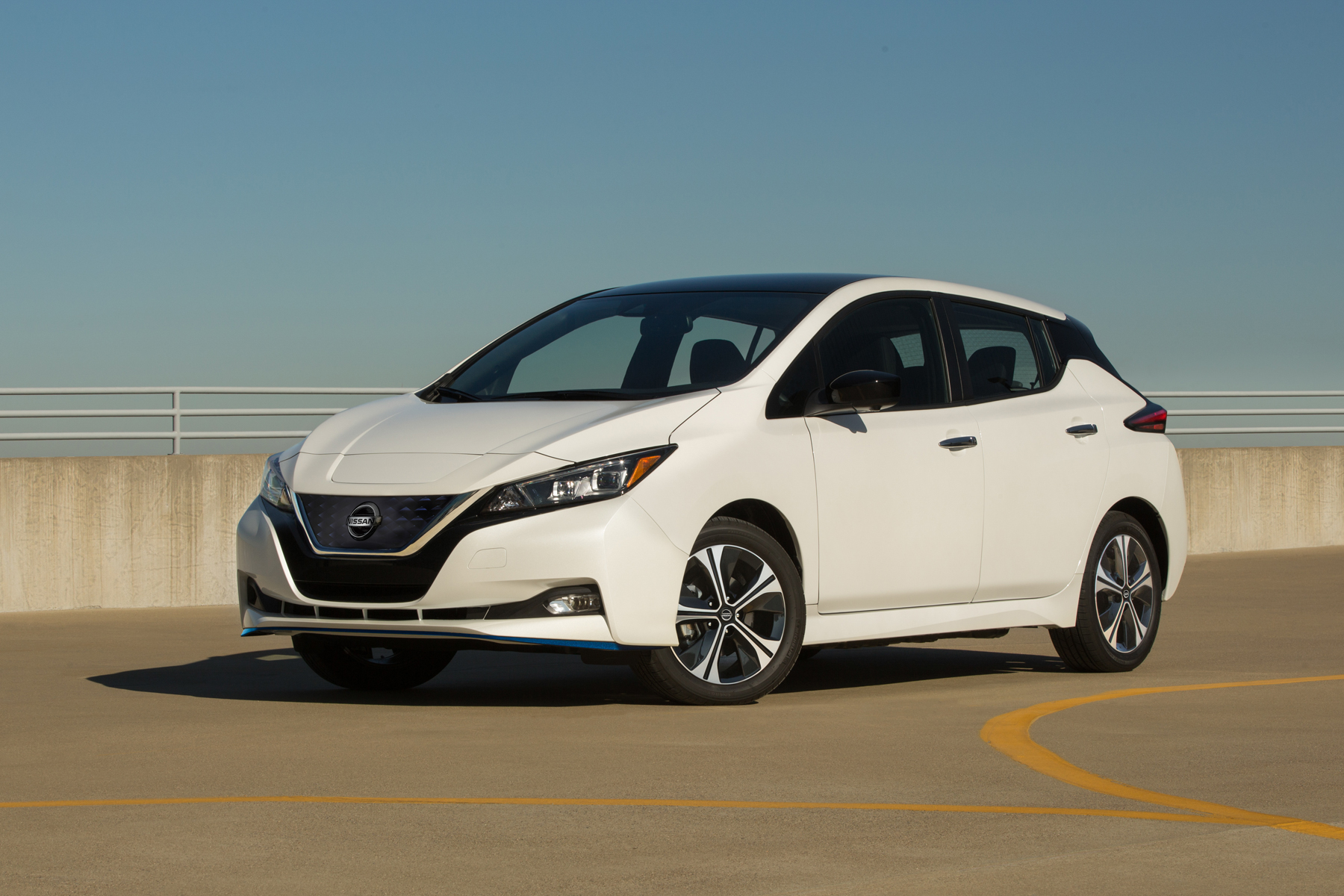 Like those familiar posters of ape-to-man evolution, the Nissan Leaf shows how EVs have morphed from grunting primitives into smarter, socialized beings. The 2010 Leaf was the world’s first mass-produced EV for a global audience. But I still remember cringing at its clown-car looks and meager 73-mile range.

Here in 2020, the new Leaf Plus can roam up to 226 miles on a charge — three times the original’s abilities. This is a legitimate car, not a compromised science project, a generously featured hatchback that’s cemetery-quiet and relaxing to drive. Welcome gains include a 45 percent stronger, 214-horsepower motor. Robust, 100-kilowatt fast charging allows the Leaf to slurp up an 80-percent charge in 45 minutes. And Nissan’s available ProPilot Assist delivers a useful, affordable suite of robotic driver aids, including steering assist on highways, adaptive cruise control, automated emergency braking, and pedestrian detection. The price can creep uncomfortably into Tesla Model 3 territory — my deluxe Leaf SL Plus cost $44,825 (though a basic S Plus can be had for $39,125). But a federal tax credit eases the blow. —Lawrence Ulrich 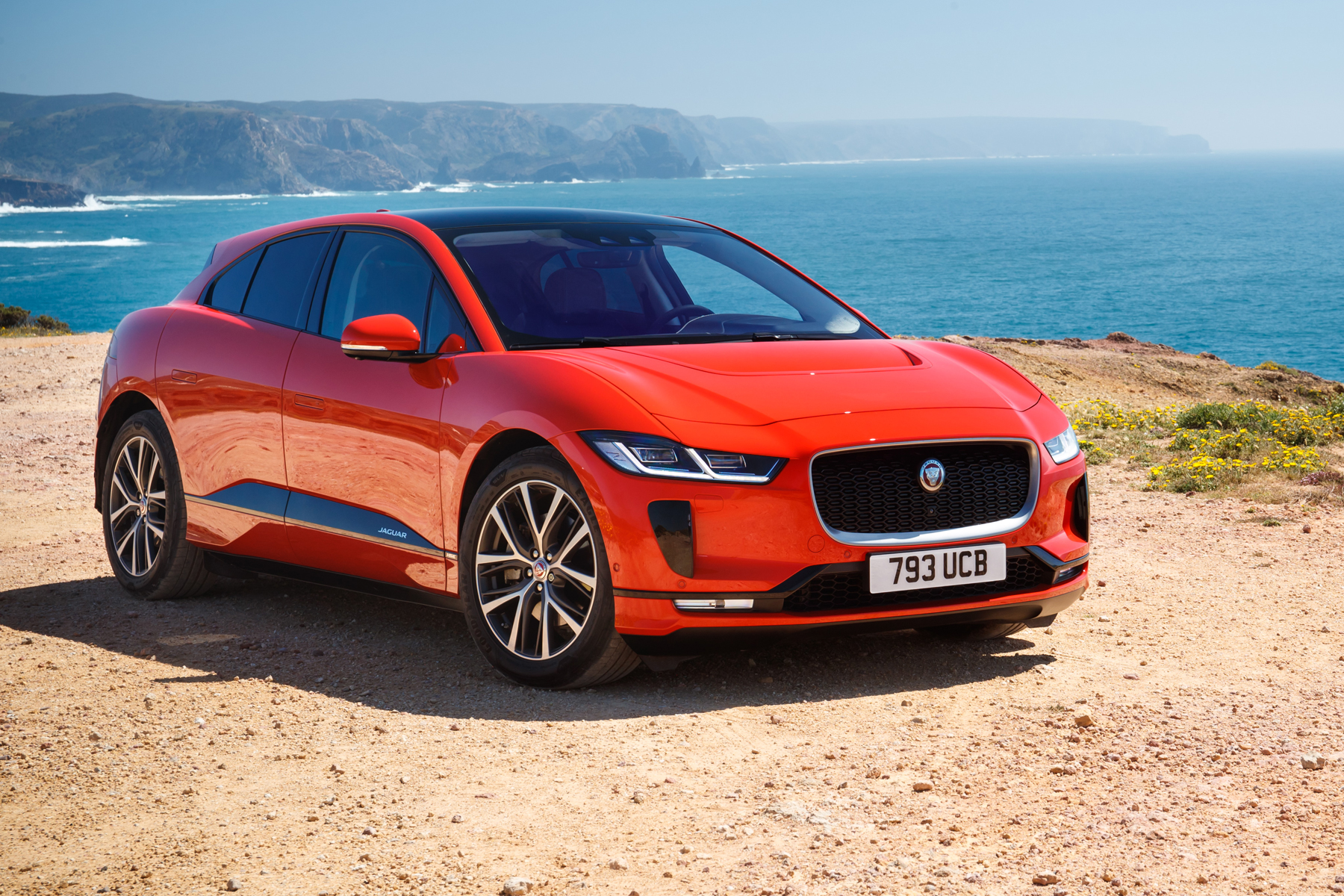 SUVs tend to be bulky and utilitarian, focused on either surviving off-road adventures or shuttling the kids from school to practice (pre- pandemic, anyway). But the Jaguar I-Pace (from $69,850) is straight-up gorgeous.

It’s also a blast to drive. Along the iconic Angeles Crest Highway in the San Gabriel Mountains, the I-Pace kept up with smaller cars through the twists and turns. A brief detour up Mount Wilson saw the Jag eat up the narrow road’s tight corners. Meanwhile, roomy seats and a comprehensive (if sometimes hard-to-use) infotainment system helped keep everyone happy inside.

On the way back down the mountain, the regenerative braking system — it’s how EVs recharge their batteries on the fly — slowed the vehicle whenever my foot came off the pedal. At times it was too eager, but the function can be softened via an onscreen menu. And with the I-Pace’s 394 horsepower, all-wheel drive, and crisp handling, you’ll want to keep your foot on the floor anyway. —KH

For the City-Dweller: 2020 Mini Electric 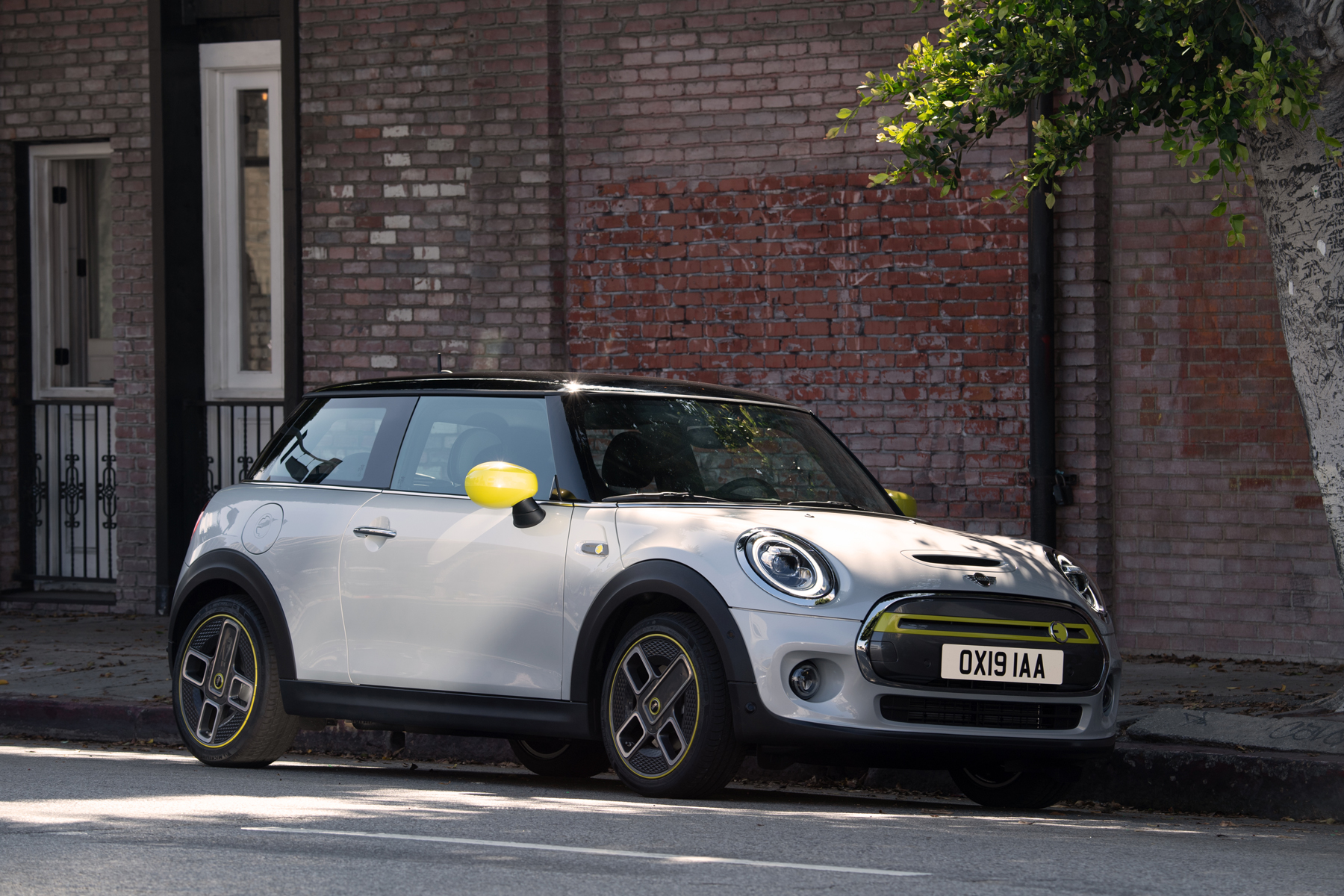 If you’re in the market for a handy urban errand runner, look no further than the Mini Cooper SE. On the surface, it’s the same Mini people know and love — a frisky-handling, high-design British coupe by way of BMW. (The German automaker owns Mini, and the Cooper’s sophisticated chassis and electric tech is shared with BMW’s i3.) The SE squirts from zero to 60 mph in a peppy 6.9 seconds, darts around lumbering SUVs in city traffic, and grips the pavement like mad with its sticky Goodyear tires. You’ll spot the electric Mini by its kicky “energetic yellow” exterior mirrors and trim and its funky alloy wheels, whose three-hole pattern recalls a British electrical outlet. Meanwhile the interior reads posh, from the light-ringed orb of its center display screen to sport seats clad in diamond-pattern, eco-friendly faux leather.

The downside: The Mini is so tiny, its makers could only stuff so much battery inside, a lithium-ion pack just one-third the size of the largest Tesla units. Still, my test drives in Miami and New York proved the Mini could go more than 130 miles on a charge, easily stretching past its official 110-mile range. You’d be surprised how long that is when you’re just commuting or short-hopping.

Plus, batteries are heavy and expensive as hell, so the Mini’s T-shaped pack makes for a lightweight and ultra-affordable EV: $23,250 after a $7,500 federal tax credit. That price is in line with gasoline-powered econoboxes that can’t touch the Mini’s style or performance, let alone its zero tailpipe emissions. —LU

For the Tech-Obsessed: Tesla Model Y 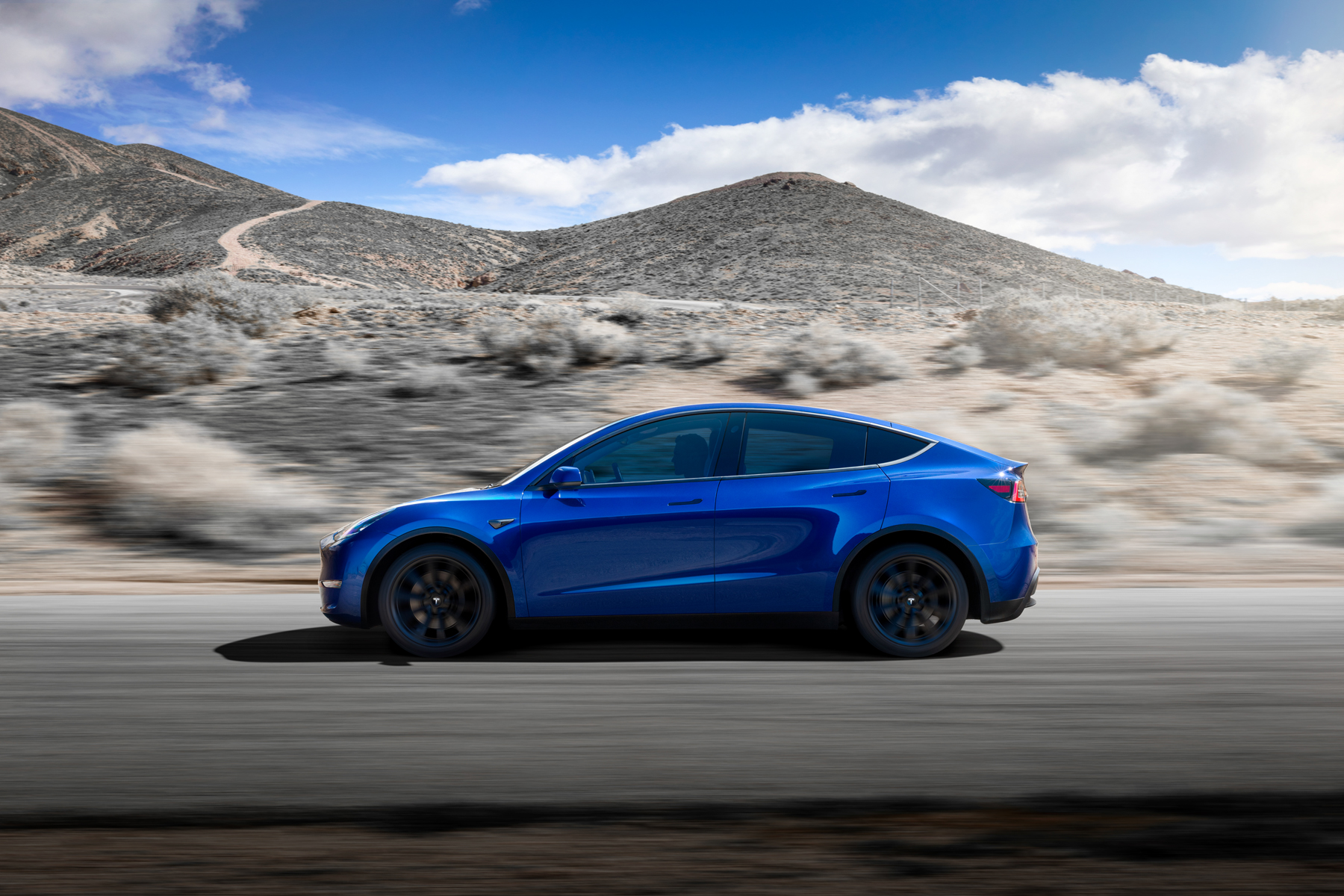 Tesla makes electric cars. But what it’s really doing is chipping away at mainstream America’s resistance to electric cars, one innovative model at a time. The latest is the Model Y, a piercing shot into the SUV-loving, traffic-stressed heart of the American buyer. Go ahead, trot out all those reasons why an EV doesn’t work for you. The Model Y knocks them dead, and adds onboard digital fart noises to remind you that Elon Musk still has a sense of humor (really — hit the whoopee-cushion logo in the vehicle’s accompanying app).

“Fun” certainly describes the Model Y, which can time-warp to 60 mph in as little as 3.5 seconds. That’s faster than several fossil-fueled, and increasingly fossilized, high-performance SUVs. On New York’s roller-coaster Taconic Parkway, the Model Y glided past slowpokes in addictive, stealth-assault fashion, its dual electric motors emitting the barest whine and whisper. A limbo-low center of gravity, a signature of EVs that pack their batteries below the floor, helped the Model Y slingshot through curves with grace and pace alike.

So-called range anxiety is also banished: The Long Range version, starting from $52,900, can cruise for 316 miles on a full electric “tank.” That’s enough for round trips from New York to the Hamptons, or Los Angeles to Palm Springs, with miles to spare. An ingenious heat pump, a first for any Tesla, aims to preserve driving range in freezing-cold temperatures, long a challenge for electric vehicles. And when it’s time to juice up, Musk’s sprawling Supercharger network can add up to 158 miles of driving range in just 15 minutes on the plug.

That nationwide network, now with more than 7,600 charge spots in North America, underlines perhaps the biggest competitive gap between Tesla and its rivals: an Apple-like ecosystem that takes all the guesswork and hassle out of the user experience, from a hyperintuitive, 15-inch central touchscreen interface to over-the-air software updates. Within minutes, Tesla updated my Model Y to sample beta versions of its latest Autopilot functions, including the ability to halt robotically for stoplights and stop signs. (The latter seems a bit of a work in progress, but it’s coming.)

Tesla was also ahead of rivals in understanding that people live through their phones. So a smartphone app replaces a traditional key, pre-cools or heats the cabin, and even summons this slope-roofed SUV to drive itself out of parking spaces (at short range). And the Model Y’s new wireless charging is one of those brilliant ideas that seems inevitable in hindsight: A driver’s and a passenger’s phone sit side-by-side on the console, in plain view, on a rubberized pad that holds them rock steady even during the hardest cornering. Expect other car companies to follow suit quickly.

Equally inevitable, it seems, is that the Model Y will supplant its Model 3 sedan sibling as America’s, and the world’s, favorite EV. That California-built Model 3 found 300,000 buyers last year, nearly three times as many as its nearest global rival. To that, the Model Y adds not just the latest upgrades and tech, but the up-high seating, standard all-wheel-drive, and versatile space that have led SUVs to crushing market domination. Try all you like: Resistance is futile. —LU