The Most Expensive (and Explosive) Celebrity Divorces of All Time 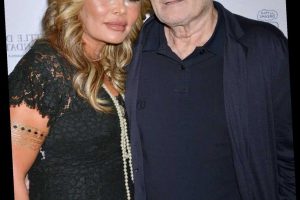 When Collins and Bates (then Cevey) split in 2006 after seven years of marriage, their $46.68 million settlement was the biggest in British legal history at the time. The couple, who share two teenaged sons, found their way back to each other in 2016 — only to split again acrimoniously at the end of 2020.

After the singer discovered that his ex-wife, 46, married Thomas Bates, 31, while still living in their $40 million Miami mansion, Collins, 69, served his ex-wife an eviction notice. She contested the eviction by claiming that Collins “refused to shower” and had a “stench that became so pervasive that he became a hermit.” (Collins’ lawyers refuted the claims, described them as “immaterial and impertinent” to the case and categorized Bates’ allegations as a means of “extortion.”)

Bates and her new husband moved out of the Miami home in mid-January, but she is now auctioning off Collins’ records and awards while awaiting the judge’s decision on her claim that she’s entitled to half of the home’s proceeds once it sells. Things were looking up for the Real Housewives of Orange County stars after David threw a surprise birthday and vow renewal ceremony for Shannon to celebrate their 16 years of marriage. The grand gesture was extra emotional considering the work the couple put into repairing their marriage after David’s affair. Sadly, it wasn’t enough to keep the duo together. Shannon filed for divorce from David in December 2017.

David agreed to pay Shannon $1.4 million “to equalize the division of community property,” according to court documents obtained by The Blast. The former couple, who are parents to Sophie, 17, and 14-year-old twins Stella and Adeline, have agreed to joint legal and physical custody of their daughters and David will also pay Shannon $10,000 a month for spousal and child support.

Considering Amazon founder and CEO Jeff Bezos was named the world’s richest man in June 2018, his 2019 divorce from his wife of 25 years was expensive.

Washington, where Bezos resides, is a community property state, which means that all assets and debts accrued during the marriage are considered owned equally by both spouses, unless there was a prenuptial agreement stating otherwise.

However, the former couple worked out terms privately, and in April 2019 announced they’d finalized their divorce, with Mackenzie walking away with around $36 billion — making her one of the richest women in the world. (By June 2020, she had already given $1.7 billion away to charity.) The basketball superstar split from his wife of 17 years, Juanita, in 2006. It wasn’t the first time the two had considered ending their marriage: Juanita filed for divorce in 2002. She ended up receiving one of the biggest payouts in history, $168 million. While not as pricey as the Jordan divorce, the former Beatle’s split from now ex-wife Mills is still one of the most expensive celebrity divorces ever: McCartney forked over nearly $50 million, and later called his marriage to Mills his biggest regret of the decade. Heard filed for divorce from Depp in 2016 after 15 months of marriage. She was later awarded $7 million in the divorce settlement, which she donated to charity. But the process wasn’t that clean-cut: the pair’s court battles turned ugly, with Heard accusing Depp of domestic abuse and him doing the same of her. The two eventually signed an NDA about the proceedings and moved on, though Heard later said the situation cost her several jobs. Spielberg’s first marriage, to actress Irving, lasted just four years, but produced one of the largest settlements in Hollywood, reported at being as much as $100 million. One of the largest Hollywood divorce payouts ever was between Gibson and Moore, who finalized their divorce after nearly 30 years of marriage in 2011 and split half of his $850 million fortune, with Moore’s settlement totaling $425 million. Their 2008 split was an intense one, and ultimately, it was reported that Madonna paid Ritchie between $76 million to $92 million. However, the drama between the two was only beginning: most recently, they were involved in a bitter custody battle over their son, Rocco. Basinger and Baldwin’s divorce drama lasted for four years, mostly due to a custody battle over their daughter, Ireland. Their split was also full of name-calling; some of the insults thrown out included “black widow” and “tin pot tyrant.” Basinger also said that she dreamt about Baldwin’s death. Things have gotten better since 2002, though: she recently told Net-A-Porter’s The Edit that the two are “cool now.” Another volatile celebrity divorce came in 2006 for Sheen and Richards. In court documents, Richards alleged that Charlie was abusive, slept with prostitutes during their marriage and tried to prevent his daughters from receiving common vaccinations. In released emails, Sheen called Richards a “sad jobless pig.” They announced their plans to divorce just three years after they wed. The former president’s divorce from his first wife, Ivana, wasn’t just expensive, it was dramatic. Trump cheated on Ivana with his eventual second wife, Marla Maples, in a scandal that claimed many a headline. Famously, Maples confronted Ivana in Aspen, where she reportedly said, “I’m Marla and I love your husband. Do you?” according to an interview Ivana gave to Barbara Walters. Reportedly, Ivana said to Maples, “You bitch, leave my husband alone.” The divorce soon followed, with an estimated settlement of $25 million. Another high-profile celebrity divorce was Ford’s split with ex-wife Mathison in 2004. The divorce came after 21 years of marriage and Mathison walked away with a large chunk of Ford’s earnings after their settlement — $85 million, according to Forbes. They were seen around the world as a fairy tale come true, but the reality for Charles and Diana was far from it. Both were unfaithful throughout the marriage, and separated in 1992. There was talk of reconciliation, but after Diana’s famed Panorama interview in 1995, it seemed the marriages was destined to go south. The royals officially divorced in 1996, just one year before Diana’s death.