Home » Celebrities » Torvill and Dean: How dancing in icy wilderness brought Olympic legends closer than ever

Torvill and Dean: How dancing in icy wilderness brought Olympic legends closer than ever Torvill and Dean: Drama tells the story of the ‘iconic partnership’

It is almost 40 years since they won gold and a perfect score at the 1984 Winter Olympics with their Bolero – a routine that stands as one of the most popular achievements in the history of sport, watched at the time by a British TV audience of 24 million people. And on Friday we’ll have a chance to see them dance a reworking of it in a one-off programme, Dancing on Thin Ice, which is part ice-dance nostalgia and part remarkable eco-documentary.

Surprisingly, Jayne Torvill and Christopher Dean have never before danced on “wild ice” – the sort that forms naturally on lakes and rivers. But last November they travelled to Alaska to make the film, which is narrated by Stephen Fry.

“To be in the wilderness with my best friend was quite a journey,” says Christopher. “For us it was a lifetime dream to do something like this. We’ve spent our lives going round in circles; caged, within a barrier within a building. So to be at one with nature on naturally-formed ice was an unforgettable experience.”

The result is a breathtaking piece of film-making which sees the couple try ice hockey, ice diving, husky sledding and ice climbing, before finally taking to a perfect mirror of wild ice – both to dance, and also to skate in straight lines on a vast icy canvas.

“It was a beautiful feeling,” he adds. “When we are in an ice rink we feel under a spotlight; we are the biggest thing. But when you take to the lake you feel tiny. There is a feeling of being small, and yet a part of nature.” 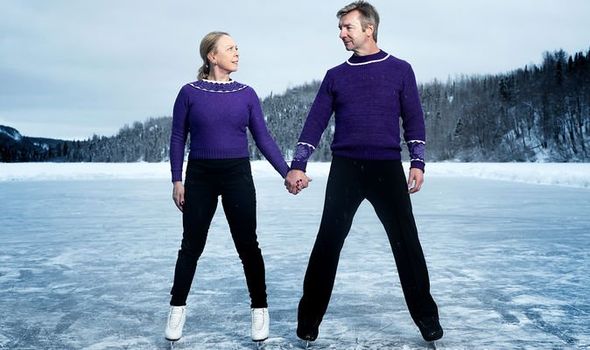 Jayne agrees: “The freedom was amazing, the sense you could skate to infinity with no barriers. The ice itself is black, you could see through it.”

Their journey became increasingly surreal when the conductor of the Alaskan train that travels north once a week through this frozen wilderness – connecting communities without roads – became so taken with his illustrious passengers that he repeatedly ordered the driver to stop the train in the hope of finding them the perfect frozen lake on which to dance.

The other passengers watched from the tracks as Christopher explained repeatedly that you can’t ice-dance in 12 inches of snow.

Finally, the dancers chartered a helicopter to find the only suitably frozen lake in the entire snow-bound state. Global warming is now happening so fast areas that were once frozen wilderness are half-melted. 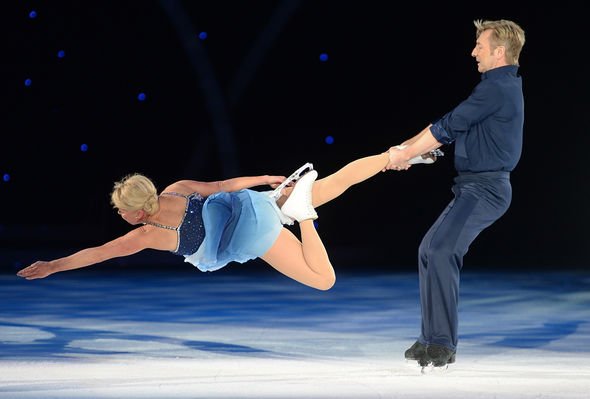 Their quest to dance became a passionate ­mission to document climate change. “For us, we were chasing a dream, but we were also chasing the ice that is disappearing,” Chris says. “It’s so disappointing to think that it could all disappear in the future, maybe in our lifetime. We wanted to show people and move forward people’s awareness.”

Jayne agrees: “It was quite an education to see this happening. It was also nice to have the time together on the trip. We met up on the ice, but to make the film we were together 24/7 for about a month. We have our own families, but we have experienced so much together during our careers.”

Chris says that theirs is a very hard relationship to quantify. 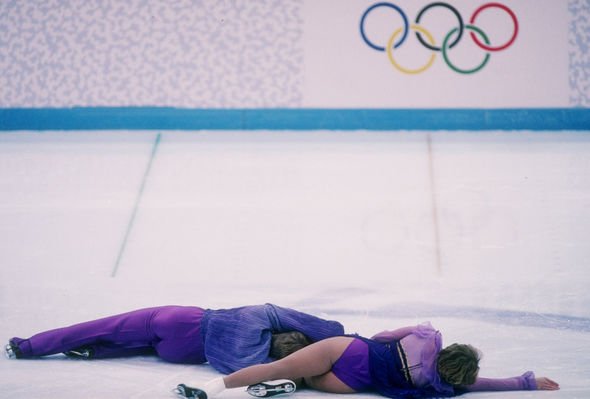 “We are just best friends, there isn’t anything we can’t say to each other, and at the same time we respect each other’s lives.

“I realised the other day that we’ve been together longer than Laurel and Hardy, or Morecambe and Wise. Only the Queen outdoes us.”

There has always been plenty of speculation about whether the couple were ever romantically connected. In recent years they’ve admitted that they “dabbled” as teenagers – with one kiss.

But that was already behind them by the time they became Torvill and Dean. 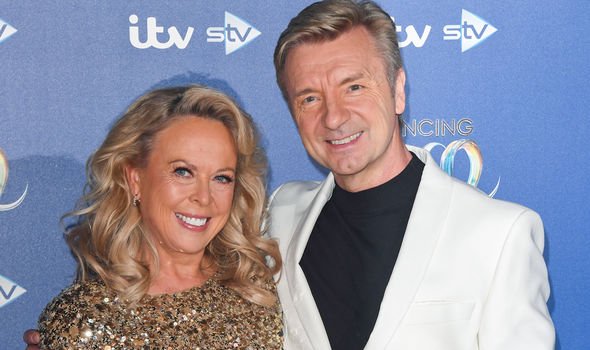 “We did actually kiss once – before we were a skating couple,” Jayne says. “We never talked about it afterwards, although we laugh about it now.”

Their union on ice was always more important, and more transcendent in some ways.

“We got close but at some point realised that we weren’t going to make a relationship off the ice in terms of a romantic one,” says Christopher.

“We had seen a lot of partnerships fail. It was a conscious decision. We really didn’t have any relationships outside of that for a long time, due to the obsessiveness of it.

“It was very hard to let other people get in the way of that and we would never bring that to the ice. Everything was geared around getting better.” 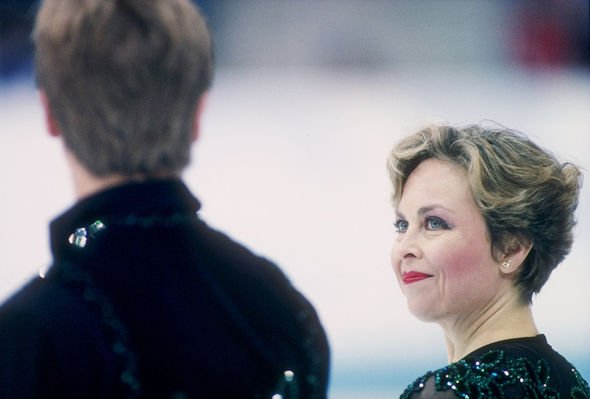 Jayne says her husband Phil Christensen, an American sound engineer to whom she has been married for 30 years, has been very understanding of the time they have had to spend together.

Christopher has married twice, to ice dancers Isabelle Duchesnay and Jill Trenary. His partner since 2011 is former Olympic ice dancer Karen Barber. Neither he nor Jayne come from creative backgrounds.

“We both came from very working class backgrounds,” he adds. “It was a process of putting one foot in front of the next to get to where we did. There was no masterplan, no social media wanting instant recognition. It was never about that.

“We started skating as a sport and a social thing,” explains the former policeman, who was also captain of his school football team. “Like anything, you want to know more about it.”

And he found himself growing increasingly obsessed with Fred Astaire and Ginger Rogers. “I loved watching him for his casualness and ease, and the way they used to do one take for their numbers.” 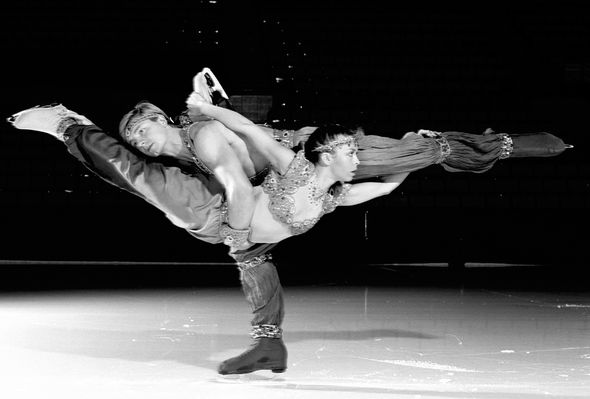 That led them into the nature of the movement of dance, classical ballet and contemporary ballet.

“It drew us into the creative side – do you need a story, or not?” he explains.

Both of them also learned ballet for a time. “To learn the basics, to get the right feeling,” says Jayne, a former insurance clerk. “And the confidence,” adds Christopher.

Jayne’s first memory of her skating partner was seeing him at the ice rink one Saturday afternoon in 1971.

“I first saw Chris a year or so before we skated together; this young boy with really blond hair. I named him ‘the Blond Prince’.”

He had already noticed Jayne, whose pairs dancing partnership with Michael Hutchinson had just come to an end.

“She was the kingpin of the rink, she was already national champion, and whenever they were on the ice we would get out of the way so they could do their run throughs. She was a big star,” says Christopher.

Yet once together, they redefined the art of ice dance. Christopher was the creative powerhouse, full of ideas and intensity; Jayne was the steady anchor.

“When I was young I was more fiery,” he admits.

“And impatient, wanting to get things right,” she adds – Torvill and Dean talk like this throughout the interview, masters in the art of ­ending each other’s sentences.

“When I was younger I wanted to conquer the world; I felt this sense of urgency,” he adds. “When I found skating, nobody else in my little village of Calverton had gone to the ice rink. It was unique.

“I remember the first time I went, the sense of wonderment I felt – the look of the ice, the gliding, the white: it looked like winter.”

Jane adds: “I was so much more relaxed, I knew practice was the thing. He has all the crazy ideas and together we make it work.”

Christopher continues: “Jayne is extremely patient, and has continued to be so. I’ve ­mellowed.”

“Yes, you’ve calmed down a lot. We are grateful that we can still go out there and perform,” she says.

Christopher laughs: “We are in our sixties; we shouldn’t be doing what we’re doing. We are enjoying the twilight of our career… we know it’s coming closer, and we are appreciating it so much now, even though we are now doing ‘age appropriate’ skating.” 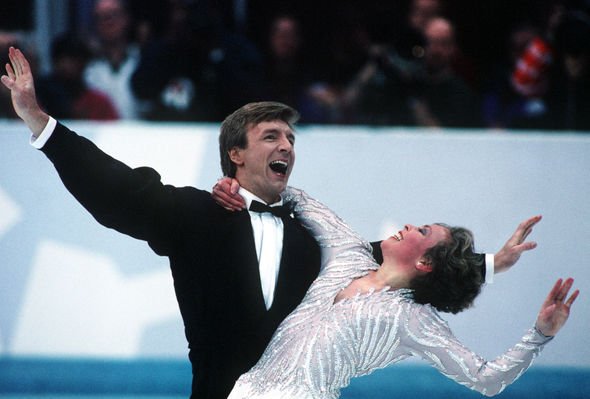 During their Canadian trip they searched for the perfect frozen lake on which to dance a reworking of their evocative routine.

And when they did, the television production crew worked through the night with shovels, snow cannons and an ice resurfacer to prepare the surface and make it safe for ice dancing.

As the mist rose above the frozen tundra and the snow-capped mountains, this couple in late middle-age and wearing their signature purple, glided to the centre of the ice and began to dance.

The years fell away as they flew across the surface to Ravel’s soaring musical score.

“It truly was once in a life-time, so inspiring, so at one with nature and our old friend Bolero,” ­remembers Christopher.