Home » Celebrities » Who Has Chris Evans Dated? His Relationship History Has A Few Surprises

Who Has Chris Evans Dated? His Relationship History Has A Few Surprises

Captain America has def romanced his fair share of ladies. Chris Evans’ dating history is filled with fellow A-list actors, and while some of those relationships lasted for years, other reported romances fizzled out after a few weeks. And since he’s pretty coy about his private life, some of his rumored flames from over the years might surprise you. From his five-year romance with Jessica Biel (yes, really), to his most recent rumored date with Lily James, Evans’ relationship history is truly a wild ride.

Perhaps the most interesting thing about the actor’s love life: He’s apparently on good terms with all his exes. As Evans told Elle in April 2017, "I’ve had no bad breakups in my life. Typically, if I see an ex, I give a big hug, and it’s wonderful to catch up. If you’re ever fortunate enough to love someone and have them love you back, it’s worth protecting that. It’s rare that someone can truly know you. And if you’ve broken through that kind of wall, I think it’s important to value that." You are one of a kind, Chris. If you’re not clear on who the star has romanced in the past, here’s a quick review. 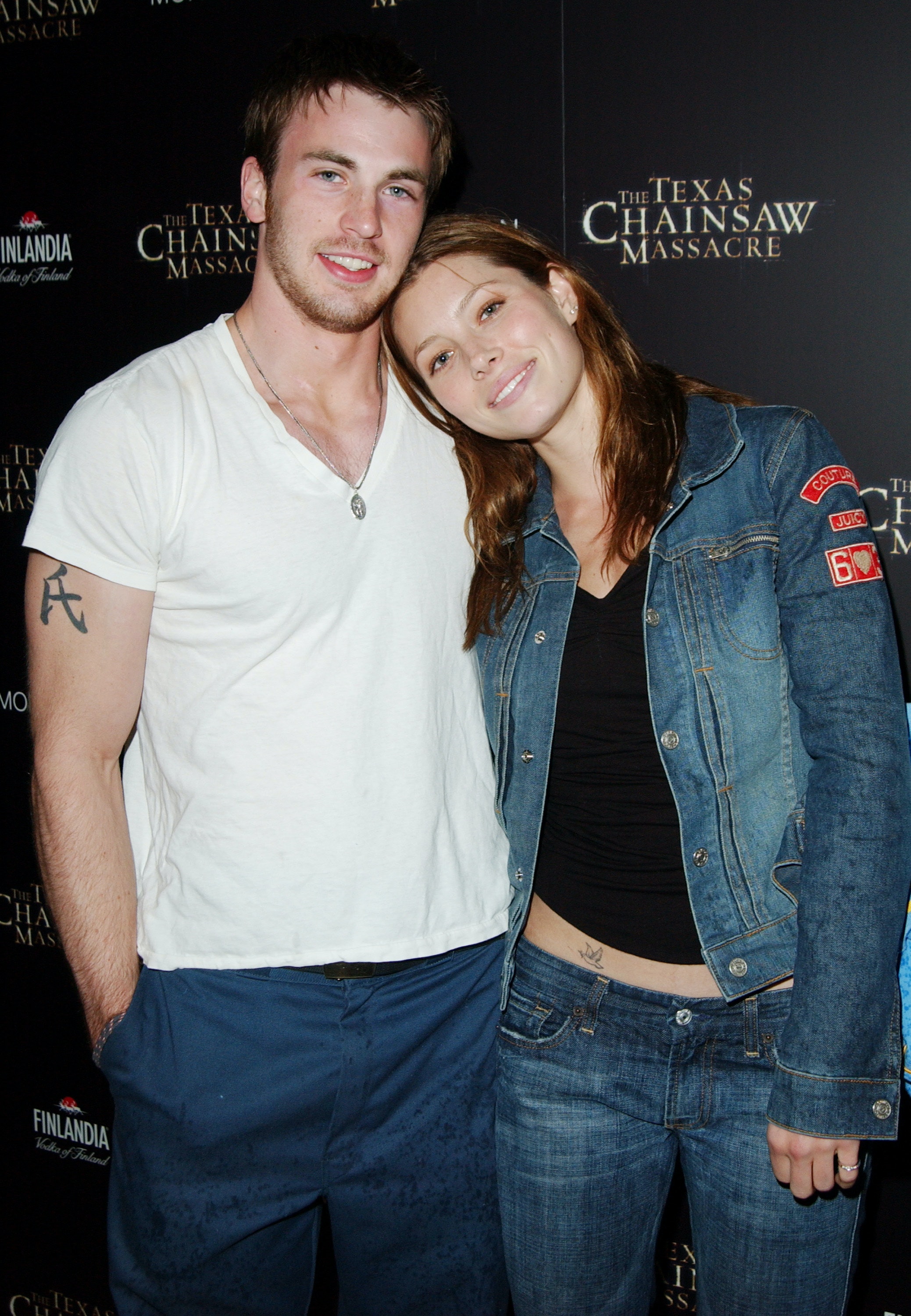 Chris Evans’ first major public relationship (and his longest relationship to date) was with Jessica Biel, who he reportedly started dating back in 2001. The two made several red carpet appearances together, and during an October 2005 interview with Cosmopolitan, Biel even talked about the possibility of marriage. "We always talk about it," she said of marriage. "We both want to be married, and we both want to have children. But we’re not engaged, so the rumors are false…so far." In June 2006, news of the couple’s reported breakup went public, though it’s still unclear when or why the couple split. Evans and fellow actor Minka Kelly have a bit of a complicated history together. After breaking up with Biel, Evans reportedly began dating Kelly in 2007, though the two reportedly split that same year, according to Us Weekly. Five years later, the exes reportedly reconciled in September 2012, only to reportedly split for a second time in October 2013. At the time, an insider for Us Weekly reportedly claimed the breakup was due to timing. "It didn’t make sense for them to be together right now," one source reportedly claimed, adding they "still care about each other."

Evans and Kelly sparked reconciliation rumors once again in September 2015 when they were reportedly spotted together over Labor Day weekend, but the rumor mill has been quiet ever since. (Elite Daily reached out to reps for both Evans and Kelly about the rumored relationship but didn’t hear back in time for publication.) Before reportedly getting back together with Kelly for a second time, Evans sparked dating rumors with Glee actor Dianna Agron in February 2011 after they reportedly hit it off at a pre-Oscars party, per Us Weekly. Soon after, a source for In Touch Weekly reportedly claimed the two were "casually dating," adding, "Chris’ brother Scott is a huge fan of her show, and he particularly loves Dianna. He and his friends like to joke that as long as she stays on the show, the family will welcome her with open arms!" However, little else was heard about the maybe-relationship. (Elite Daily reached out to reps for both Evans and Agron about the rumored relationship but didn’t hear back in time for publication.) 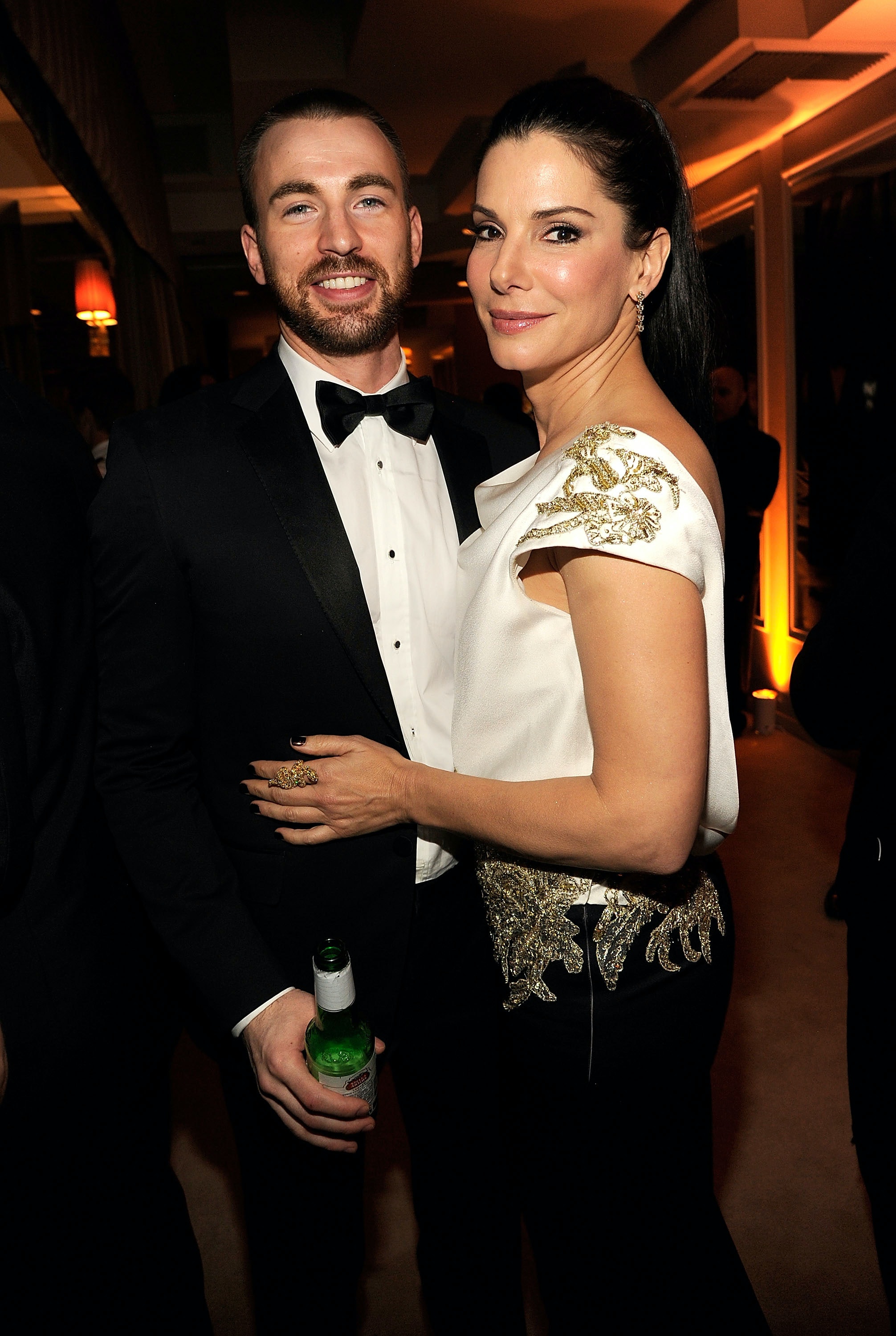 Unlikely duo Evans and Sandra Bullock reportedly first met at the Vanity Fair 2012 Oscar Party and — a few months later — Evans confessed to having a crush on Bullock when he was younger. "I used to be in love with Sandra Bullock when I was growing up. Sandy B. was my girl," he told Playboy in April 2012. "I remember seeing Speed when I was in seventh grade and just thinking, ‘That’s her.’"

Two years after that, a source for E! News reportedly claimed Evans and Bullock were in the beginning stages of dating. "They are not in a relationship, but they are definitely hanging out and are in the early getting-to-know-each-other phase," the source reportedly claimed. "They haven’t put a title on it, but they really like each other."

Though it’s still not clear whether they ever actually dated, Bullock joked about the rumors with Entertainment Tonight in June 2014. "We’ve since married and it started breaking apart, so we separated," she quipped. “We filed for divorce, and I hope everyone can respect our privacy." (Elite Daily reached out to reps for both Evans and Bullock about the rumored relationship but didn’t hear back in time for publication.) 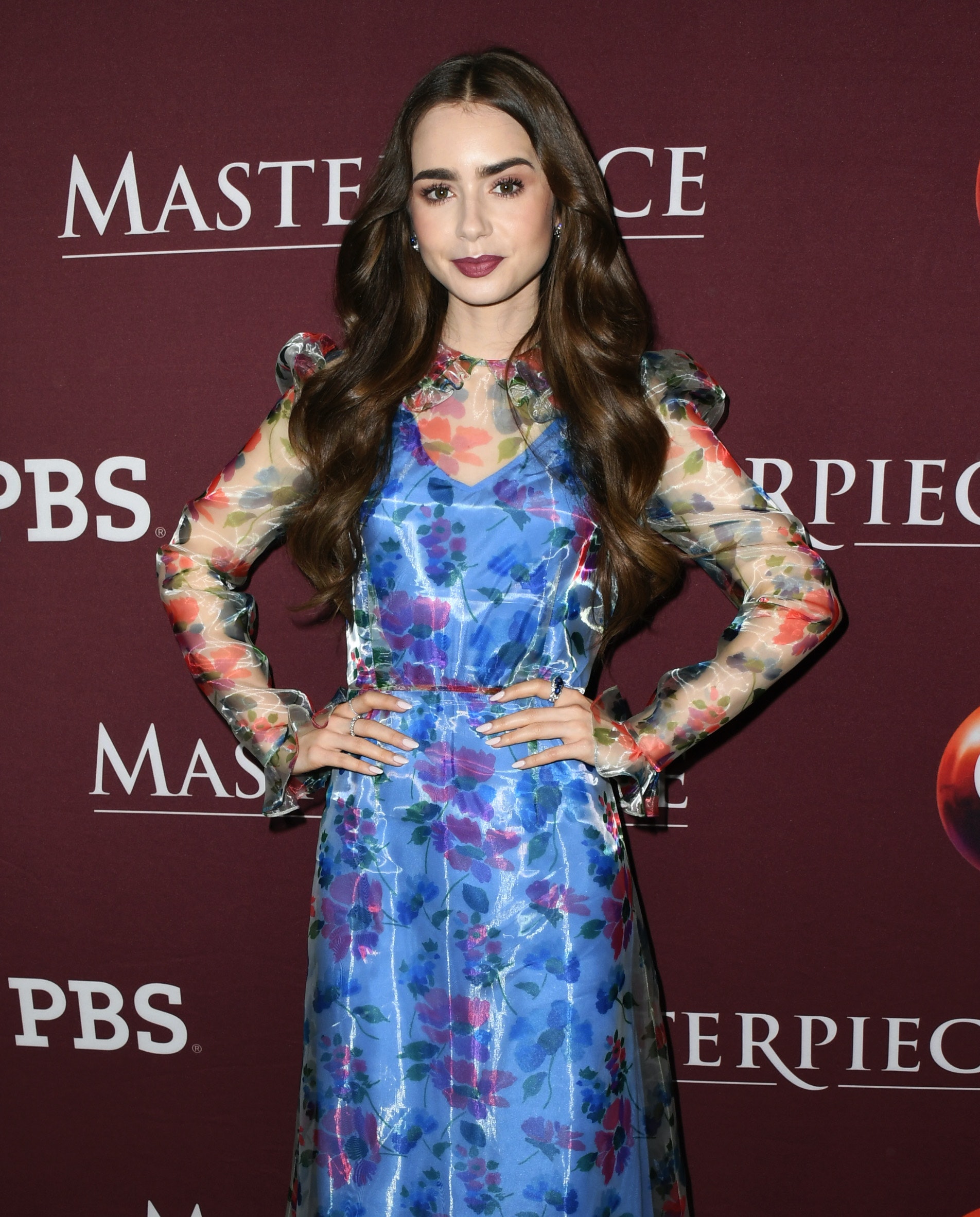 When asked about the rumored relationship by Entertainment Tonight in April 2015, Evans gave an adorably awkward response. "Oh, come on. We’re not… we’re not, uh, listen, listen, listen, listen. We… we’re not gonna give the answers to those questions," he said. Rumors about Evans and Collins fizzled out soon after that. (Elite Daily reached out to reps for both Evans and Collins about the rumored relationship but didn’t hear back in time for publication.) 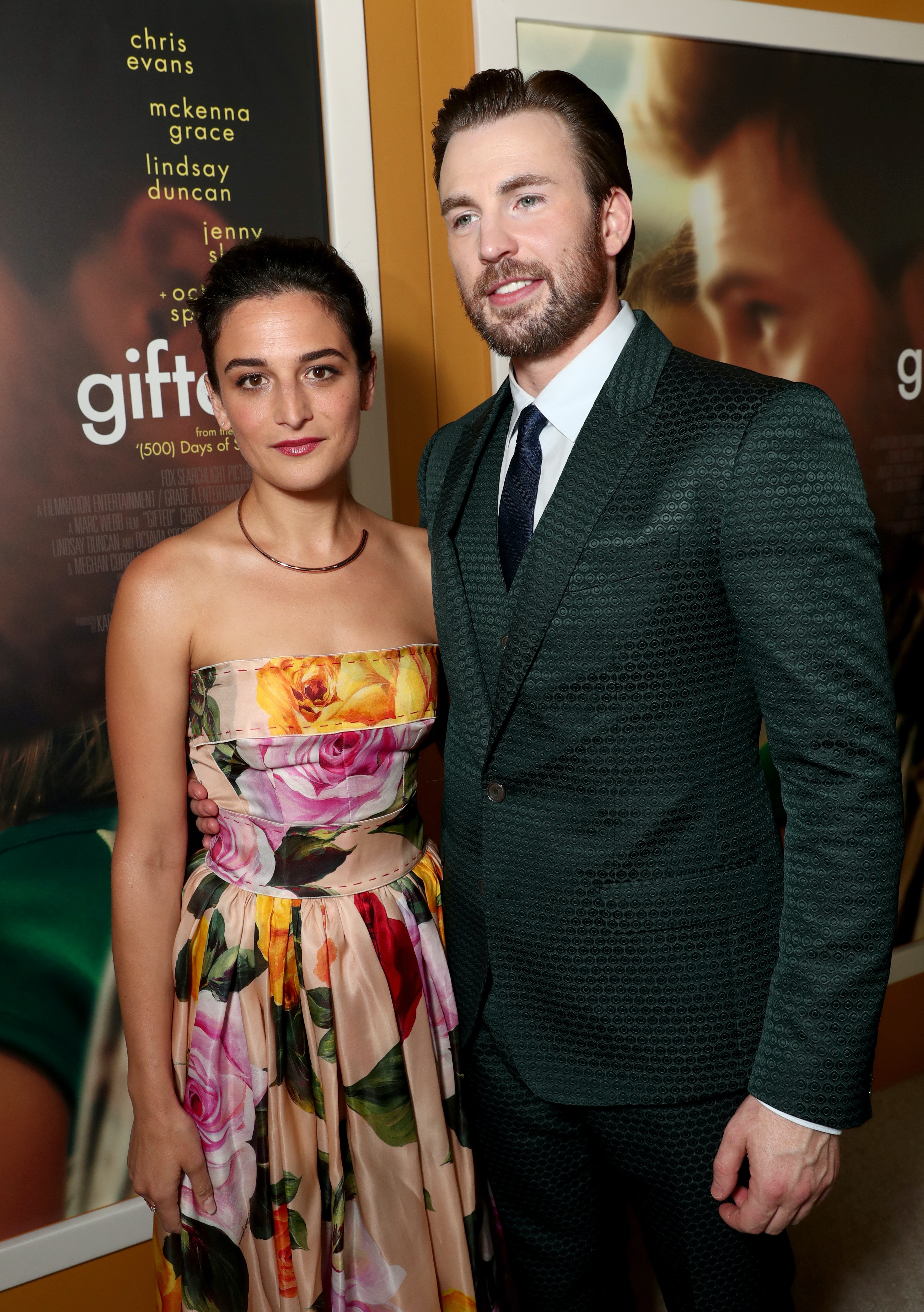 Evans and Jenny Slate first met on the set of Gifted in 2015, and in May 2016, the two reportedly started dating after Slate split from her ex-husband, Dean Flesicher-Camp. A month later, the couple made their red carpet debut, where Slate gushed about her new boo. "It’s kind of like I got my dream seventh grade boyfriend," she told Entertainment Tonight. "We didn’t know each other growing up, but we grew up about a half hour away from each other. We’ve been friends for a while."

After less than a year of dating, the couple reportedly split in February 2017, with a source for Us Weekly reportedly claiming, "It was completely amicable and a mutual decision due to conflicting schedules and they remain very close friends." While broken up, Evans and Slate continued to say sweet things about each other, with Slate calling her ex "a lovely person" during a March 2017 interview with Vulture and Evans calling Slate "an incredible human being" and "a very, very special person" during an April 2017 interview with USA Today.

By November 2017, People claimed the couple was reportedly back on again. (Elite Daily reached out to reps for Evans and Slate about the rumored reconciliation but didn’t hear back in time for publication.) The couple ultimately reportedly broke up for good in March 2018, per The New York Times, and Slate has since moved on with art curator Ben Shattuck. Luckily, it seems like the two are still on good terms. In July 2020, Evans was romantically linked to actor Lily James after they were reportedly spotted out and about in London. Little else has been heard about the maybe-couple since then, so only time will tell whether these two are more than friends. (Elite Daily previously reached out to reps for both Evans and James about the rumored relationship but did not hear back.)

Moral of the story: If you want a shot with Chris Evans, hang out with him at any Oscars-related party. Sounds easy enough.