Actor Emma Roberts is having a baby boy with her actor partner Garrett Hedlund.

The couple has not yet revealed a due date, but Roberts said this week that the day of the birth would be within months.

Roberts and Hedlund have been dating since 2019 and have not publicly mentioned marriage yet.

The American Horror Story star sat down for an interview this week with Jimmy Kimmel, where she discussed her pregnancy, and also revealed that she had blocked her mom on Instagram after the latter had revealed her daughter was expecting.

The couple officially announced the news at the end of August when Emma posted a series of pictures to Instagram, where she proudly showed off her baby bump with Garrett. She captioned the pics with: “Me…and my two favorite guys. 💙💙”

The post has now received a massive 2.7 million likes. 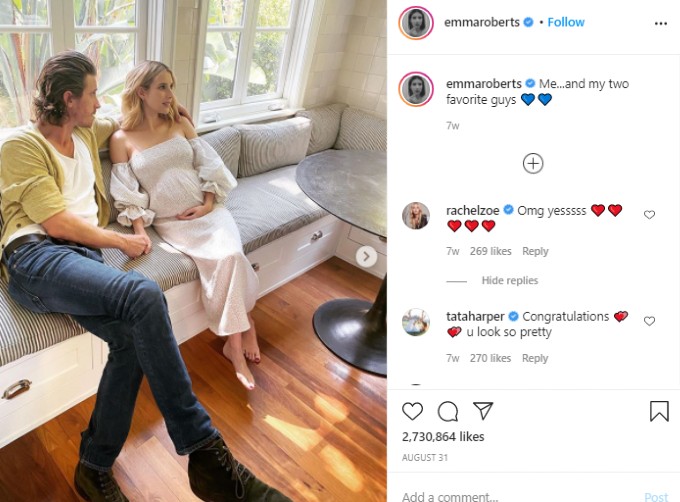 However, her mom had inadvertently leaked the news back in July when she started interacting with fans on Instagram; when a fan asked her if Emma was pregnant, she answered yes.

This interaction caused an argument between mother and daughter, which led to Emma blocking her mom on Instagram. Thankfully, they seem to have resolved the situation and are Instagram buddies again.

Emma also said she was so convinced she was having a girl that she told Garrett he could name the baby if it were a boy. Lo and behold! It turns out it’s a boy, so Garrett apparently ignored Emma’s list of suggestions and chose his own name. So far, the actual name remains a secret.

Hedlund is a successful actor and model and has quite an impressive resume. If he seems familiar, it’s probably because you’ve spotted him in loads of movies and TV shows such as Mudbound, Friday Night Lights, and TRON: Legacy to name but a few.

The 35-year-old grew up in Minnesota until he moved to Arizona when he was 14. At the tender age of 18, he moved on to Los Angeles, hoping to hit the big time. Which he pretty much managed to do by landing a role as Brad Pitt’s cousin in epic movie Troy.

His dating history is quite impressive too; in 2011, he met Kirsten Dunst on the set of On The Road, and the pair later began a steamy relationship that lasted until 2016. They reportedly split after realizing they had different future goals.

Hedlund was first linked with Scream alum Emma after they were spotted holding hands in New York in early 2019. They have kept their relationship low key and have not publicly spoken about marriage yet.

Roberts had previously had a high-profile relationship and break-up with Evan Peters; the pair went their separate ways just before she was linked to Hedlund.

There’s been lots of baby news this month, and one of the more high-profile births was that of singer Usher’s daughter, who was born to his baby mama Jenn Goicoechea three weeks ago.