Grammy winner Ariana Grande will unfortunately be skipping tonight’s awards ceremony. The pop star and Wicked lead posted an Instagram about her hit album Positions and gave her best to those attending IRL, telling them to “have a beautiful time.”

Here’s what she wrote:

She isn’t the only one skipping the show tonight. Miranda Lambert just confirmed she also will not make it because she is “slammed.” Because this year’s show is in Las Vegas (instead of Los Angeles), the trek might impact attendance for many celebrities who have packed California-based schedules.

Ariana hasn’t walked an awards red carpet since January 2020, when she appeared at the 2020 Grammys in this Giambattista Valli showstopper: 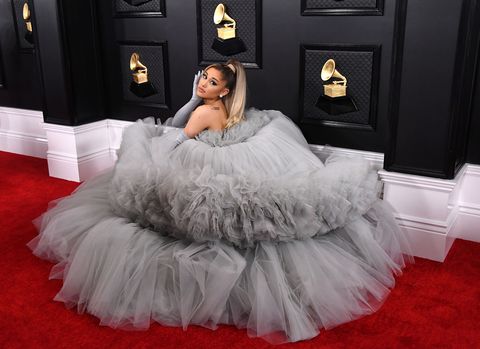 This year, Ariana is up for three Grammy Awards: Best Pop Vocal Album (for Positions), Best Pop Solo Performance (for “Positions”), and Album of the Year (for Doja Cat’s Planet Her (Deluxe)). In the past, she’s won two Grammys, most recently a Best Pop Duo/Group Performance Grammy for “Rain On Me” with Lady Gaga.

When Ariana won the Grammy with Gaga, she reacted by doing what most Little Monsters were also doing at the time: tweeting at Lady Gaga to wake up and notice.

“MOTHER MONSTER WAKE UP @ladygaga !!!!!!!!???” she tweeted. “Eternally, deeply grateful for u, for this experience, to have been a part of this song and this celebration of healing and recovery, to be able to dance in the rain with u, to call u my dear friend & to now share this. beyond thankful. congratulations queen, ti voglio bene!”